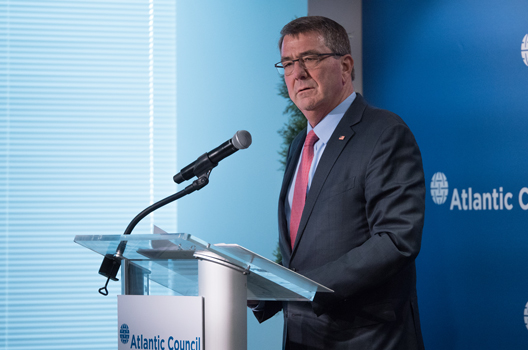 As I sat in Washington National Cathedral at former US Secretary of Defense Ash Carter’s memorial last week, I was as shocked and heartbroken as I was when I learned of his passing in the early morning hours of October 25, 2022. I kept thinking about his laser-focused, penetrating mind, the kinetic way he engaged in the world, the seemingly limitless energy from which he made things manifest in time and space. He was utterly relentless, indefatigable. And now… silence. In that silence, we in the national security community are trying to find our way.

Those who knew Ash, who also served as an Atlantic Council board member and honorary director, knew his brilliance. His intellect was formidable, crackled like lightning, exposing gaps in our thinking that we hadn’t before seen. The only two people I ever witnessed win an argument with him were Christine Fox, then director of the Office of Cost Assessment and Program Evaluation, and Sandy Winnefeld, then vice chairman of the joint chiefs of staff, usually after sparring sessions that were as exhausting as they were enlightening. Not only was Ash the smartest person in every room, he was also clear, unambiguous, demanding, and relentless in solving complex problems of consequence.

The rigor Ash applied to national security problems was impressive; his execution, almost always flawless. There was something singularly unique about his sensibility: firmly grounded in history, oriented toward the future, committed at the DNA level to producing enduring outcomes. It’s exceedingly rare for a person to be that smart and discerning, and to execute that effectively in the real world, all for the good of a nation. Ash had it all in equal quantities.

Former Secretary of Defense Ashton Carter has died at the age of 68.

In 2017, he spoke at the @AtlanticCouncil about how he viewed the job of US defense secretary. pic.twitter.com/24Lkcq11fR

It would have mattered to Ash that US President Joe Biden, National Security Advisor Jake Sullivan, Defense Secretary Lloyd Austin, every cabinet secretary of a national-security agency, members of Congress, titans of industry, and countless academics (from scientists to artists) attended his service. What would have mattered more to Ash was the attendance of the dozens of people he—for four decades—mentored and taught, from former staff to his former and current students at the Harvard University Kennedy School of Government.

But what would have mattered to Ash the most was the presence of wheelchair-bound veterans of the wars in Iraq and Afghanistan, their families, and Gold Star families. Many don’t know how big Ash’s heart was. That heart manifest most palpably in his commitment to our service members and grief-stricken Gold Star families. I lost count of how many dignified transfers, in which fallen military members are returned to the United States, he and his wife, Stephanie, attended. Few knew just how much time he spent with devastated families. Other than Stephanie (the love of his life) and his children, this special community of service members, wounded warriors, and military families was his north star.

He once said, on a long trip to the Asia-Pacific region, that his father died young. I’ve thought of this often. It certainly seems to have determined how he set his internal rheostat to live one way—fast and with purpose. That intensity crafted the clarity with which he observed and assessed things and grew the heart with which he completely pursued the security of this country and, most of all, the safety of those fighting to protect it.

He was a man in a hurry. And how lucky we were to know him.

Wendy R. Anderson is the senior vice president for national security at Palantir Technologies. She served as chief of staff to Ash Carter when he was deputy US secretary of defense.

Image: “To compete for the best, DoD must select the best, based solely on their qualifications,” said fomer Secretary of Defense Ash Carter at the Atlantic Council on April 6, 2017. (Atlantic Council/Bradley Howard)