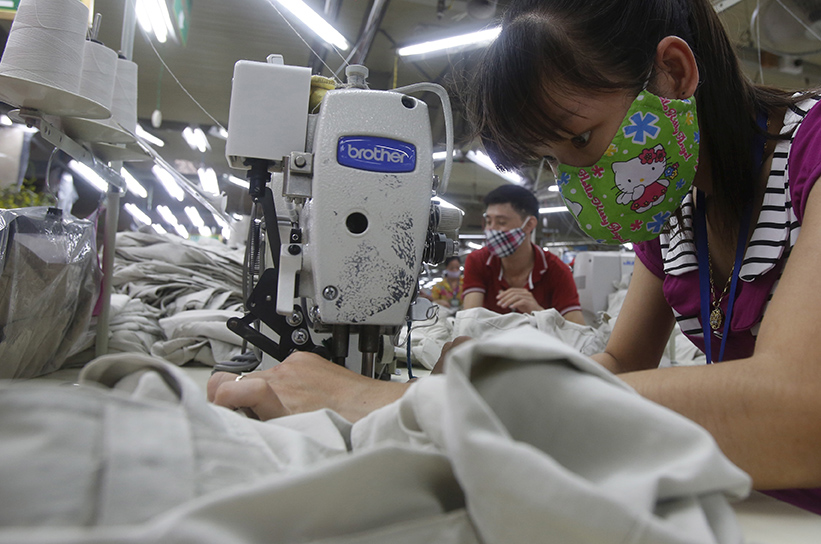 Laborers work at a garment factory in Bac Giang province, near Hanoi, on Oct. 21. Vietnam’s textiles and footwear would gain strongly from the Trans-Pacific Partnership (TPP) trade agreement. (Reuters/Kham)

The Obama administration will not renegotiate a trade deal it spent more than five years negotiating with eleven other Pacific Rim countries, a White House official said on Nov. 10.

“Renegotiation is just not an option because if you open up the issues, particularly some of the most sensitive issues, that would risk unraveling the whole deal,” Caroline Atkinson, Deputy National Security Advisor for International Economic Affairs, said in an Atlantic Council phone briefing.

The Obama administration released the text of the Trans-Pacific Partnership (TPP) agreement on Nov. 5 and US President Barack Obama formally gave Congress notice of his intent to sign the deal. His administration is now trying to win congressional support for the TPP. Some lawmakers have said parts of the agreement will need to be renegotiated.

“I understand that renegotiation may be difficult, particularly with so many parties involved,” Sen. Orrin Hatch (R-Utah) said in a speech at the US Chamber of Commerce, according to a Reuters report.

“But at the end of the day, the alternative to renegotiation may very well be no TPP at all,” he added.

The Obama administration fought hard for more than five years to get a deal that is in the interests of the American people, said Atkinson. “A lot of people expected this deal to get finished in Hawaii earlier in the summer… the President and his negotiators did not feel that we had got quite the best that we could, so we took the decision to wait and try to get more,” she added.

The United States and eleven other Pacific Rim countries eventually reached an agreement in Atlanta on Oct. 5. The TPP, the largest-ever regional trade accord in history, includes the United States, Canada, Mexico, Peru, Chile, Japan, Vietnam, Brunei, Malaysia, Singapore, Australia, and New Zealand. These countries together make up 40 percent of the global GDP. At least one other country, Indonesia, has expressed an interest in  joining the TPP.

Since the text was made public, the TPP has won support from former National Security Advisors and Secretaries of State for its geostrategic importance, and from more than twenty organizations, including environmental groups, Atkinson said in a conversation moderated by Jason Marczak, Deputy Director of the Atlantic Council’s Adrienne Arsht Latin America Center. However, at least one former Secretary of State, Hillary Rodham Clinton, who while part of the Obama administration had advocated for the deal has since come out in opposition to it.

The TPP breaks new ground, specifically with enforceable standards for labor and the environment, and includes sections on transparency, anti-corruption, child labor, and intellectual property rights. “In all of these diverse, different areas TPP advances the ball,” said Atkinson.

US Trade Representative Michael Froman, the lead negotiator of the deal, made a strong pitch for the TPP at the Atlantic Council on Oct. 27.

“At the end of the day, the decision we have to make is whether we are better off with [the TPP] or with the alternative future that we are likely to face? Economically and strategically the choice is clear,” he said.

China conducts large volumes of trade with many of the countries that are part of the TPP, especially Malaysia, Vietnam, and Japan. The higher trade standards set by the TPP could have a positive influence on Chinese trade practices.

“We think that the high standards in TPP will drive toward higher standards not just for TPP countries, but for others in the region, and in that sense it will put in place a kind of race for the top,” said Atkinson.

TPP will also be a “a huge win for the United States geostrategically,” she added.