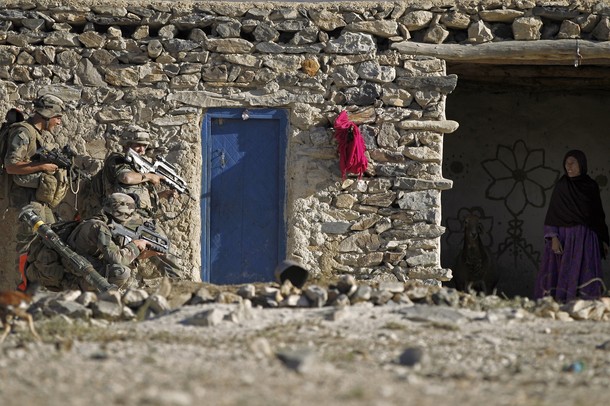 This situation could easily careen out of control. The Obama administration, which is unhappy with what it perceives as Pakistan’s lack of action against anti-American militants, is seriously miscalculating if it is using such tactics to pressure Pakistan to launch operations against its will. Better to argue your case behind closed doors, as allies should — or risk a public split. Similarly, Pakistan risks overestimating its leverage over the United States and NATO by shutting down the coalition’s supply routes across the Durand Line. If anything, this embargo will accelerate the U.S. drive to diversify its logistics chain — while taking money out of Pakistanis’ pockets.

Pakistan not only has deep historical, social, and cultural connections to Afghanistan (there are more Pashtuns in Pakistan than Afghanistan), but the Pakistani port of Karachi is essential to NATO’s logistics (75 percent of materiel travels through Pakistan). Further, Pakistan has a better relationship with the Taliban than the Kabul government, so any peace settlement begins in Quetta, Peshawar, or Islamabad. Given how important Pakistan is to NATO’s efforts in Afghanistan, we asked ourselves, “What can NATO do to improve relations with Pakistan while increasing pressure on the Taliban?”

Pakistan has emerged as one of the largest recipients of U.S. international assistance, which includes over $3 billion in the current fiscal year. The United States provided substantial disaster relief assistance in response to the 2005 earthquake and is providing humanitarian assistance to ongoing flood relief efforts. In spite of these efforts, Pakistan’s people and government have a long memory of previous unmet promises and worry about eventual NATO withdrawal beginning in 2011. To illustrate that NATO countries are committed to the long-term security and stability of Central and South Asia, NATO should invite Pakistan to join the Alliance. A bold move like this signals a long-term commitment that Pakistan will not be abandoned.

Pakistan would also fill a vital role in NATO too. First, its inclusion formally accepts that NATO is a global security organization not just an Atlantic one. Second, Pakistan provides NATO the peacekeeping experience it needs to confront contemporary security challenges (Pakistan is one of the largest contributors to United Nations peacekeeping operations around the world). Third, Pakistan could shift its military focus from deterrence of India to the more natural counterterrorism and counterinsurgency roles its military can fill.

It is difficult to see how any NATO government will be enthusiastic about extending Article 5 security guarantees to a country that has territorial disputes with a nuclear-armed neighbor and which has in the past proven both unwilling and unable to prevent terror attacks launched against India (and other states) from being plotted and planned on its territory, sometimes with the support of elements within its own national security apparatus. Pakistan may be a bridge too far for an organization that cannot agree on the desirability of including Ukraine and Georgia. And Pakistan already holds the status of a major non-NATO ally in the U.S. book.

If this idea, bold as it may be in its imagination, is a non-starter for a long list of practical reasons, it should not preclude us from considering other out-of-the-box proposals. One might be to reactivate (or recreate) CENTO, the old NATO-style alliance that Pakistan did belong to during the Cold War. But even this idea is fraught with risks. Without significant progress on the Indo-Pakistani front, any formal U.S. alliance with Islamabad risks alienating the emerging rapprochement with India (a non-starter for Washington) or must otherwise guarantee Pakistan’s security in all areas except a potential clash with India, making such a project worthless in Pakistan’s view. And China and Russia are likely to argue that such a nascent regional security organization already exists—in the Shanghai Cooperation Organization, to which both India and Pakistan sit as observers.

But perhaps a NATO-Pakistan agreement, that would spell out the two items of greatest concern to Islamabad? One guaranteeing no preemptory withdrawal, leaving Pakistan “in the lurch,” the second, acknowledging a defined Pakistani “zone of privileged interests” in Afghanistan?

Since NATO is the kink in the relationship, why not approach Turkey – a Muslim NATO member country – to leverage the US-Pakistan relationship and calm the tensions between Pakistan and NATO?  This would be a major political achievement for Turkey, and could potentially strengthen its argument for EU membership down the road.

In a broader context, NATO’s ability to increase pressure on the Taliban has to take into account two pressing questions: (1) can a purely military/kinetic strategy to pressure the Taliban be effective?  And, (2) even in the event of NATO-Pakistan relations improving, why should we expect Pakistan’s national interests to drastically change towards an anti-Taliban stance – especially since the Taliban directly and indirectly serve certain Pakistani interests in the region?

For the first question, it is necessary to trace the source of Taliban empowerment in the early 1990s:  It was not just military prowess, but it also included social justice – however distorted. Therefore, part of the solution involves strengthening and empowering a credible Afghan judicial system, in order to bring law and order into Afghan society with concrete results, and undermine the Taliban in the process.

For the second question, there is no easy answer. There are religious constituencies within Pakistan, along with some ISI elements, who view the idea of supporting the Taliban as a sound one. How can these elements be divorced from influencing Pakistan’s national interests and strategies? Pakistan is one of the “founding members” of the Taliban.  We fail to appreciate that fact.

Undoubtedly this short discussion is limited, but Pakistan needs real incentives to cooperate with NATO. Humanitarian and development assistance are not re-aligning Pakistan’s national interests. Perhaps Turkey can play a significant role in presenting those incentives and not be resented as a “Western imperial power.”

Derek S. Reveron, Nikolas K. Gvosdev and Hayat Alvi are professors of national security affairs at the US Naval War College. These views are their own. Photo credit: Getty Images.