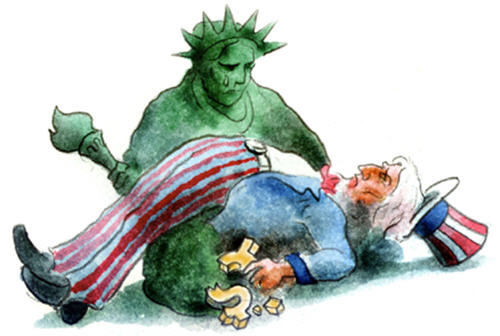 Bret Stephens notes that there has been a steady stream of American decline commentary, especially from our friends in Europe, in recent weeks and that  much of it brims with “ill-disguised glee.”

But when the tide laps at Gulliver’s waistline, it usually means the Lilliputians are already 10 feet under. Before yesterday’s surge, the Dow had dropped 25% in three months. But that only means it had outperformed nearly every single major foreign stock exchange, including Germany’s XETRADAX (down 28%) China’s Shanghai exchange (down 30%), Japan’s NIKK225 (down 37%), Brazil’s BOVESPA (down 41%) and Russia RTSI (down 61%). These contrasts are a useful demonstration that America’s financial woes are nobody else’s gain.

Then again, nobody serious is arguing otherwise.  Rather, they’re issuing a chorus of “I told you so’s” and blaming the United States for kicking up the waves that is threatening to sink their boats.  And, I might add, it’s not coming just from Europe. Americanism evangelist  Francis Fukuyama — granted, writing in the Times of London — argues that we’re witnessing the steady erosion of America’s “brand” and he blames it on our ideology:

The Reagan-Thatcher revolution caused a huge amount of pain as industries shrank or shut down. But it also laid the groundwork for three decades of growth and the emergence of new sectors such as information technology and biotechnology.Like all transformative movements, however, the revolution lost its way because it became an unimpeachable ideology, not a pragmatic response to the excesses of the welfare state.

Fukuyama argues that we must revitalize our ideology and politics to deal with the radical changes that have taken place in the world since Reagan and Thatcher first came to power — and also avoid overcorrecting and destroying the core that is good.  Stephens notes, though, that we’re actually in comparatively good shape:

Of course it may require considerably more than $700 billion to clean out our Augean Stables. But here it helps that the ratio of government debt to GDP in the U.S. runs to about 62%. For the eurozone, it’s 75%; for Japan, 180%.

It also helps that the U.S. continues to have the world’s largest inflows of foreign direct investment; that it ranks third in the world (after Singapore and New Zealand) for ease of doing business, according to the World Bank; and that its demographic trends aren’t headed toward a tall and steep cliff — as they are in the EU, Russia, Japan and China.

Ultimately, this strikes me as right.   Paul Kennedy’s Rise and Fall of Great Powers led the way in creating a cottage industry of American decline books two decades ago, variously predicting that the United States would be overtaken by Japan, China, or a United Europe.   Joseph Nye’s 1990 response, Bound to Lead: The Changing Nature of American Power, holds up much better in hindsight.

If the Eurozone were to emerge as a united economic system, the United States would quickly move into second place, overwhelmed by the sheer size and accumulation of human capital across the Atlantic.  As has been again demonstrated in the response to the global financial crisis, however, “Europe” is still an ideal far from being realized while the domesic politics and interests of the EU’s member states continue to prevail.  So long as that’s the case, the United States will lack a peer competitor on the economic front just as it does militarily.

If , on the other hand, Western Europe were to truly become a single economy, it would be one with essentially the same values, goals, and norms as our own.  As with the famous car rental ads from the 1970s, being number two would force us to try harder — to live up to our ideals more closely, shed antequated protectionism and corporate welfare for favored industries, and be much more prudent in our borrowing.  It would also make transatlantic trade much more efficient, providing a bilateral set of rules rather than more than a dozen.

The good news is that America benefits either way.