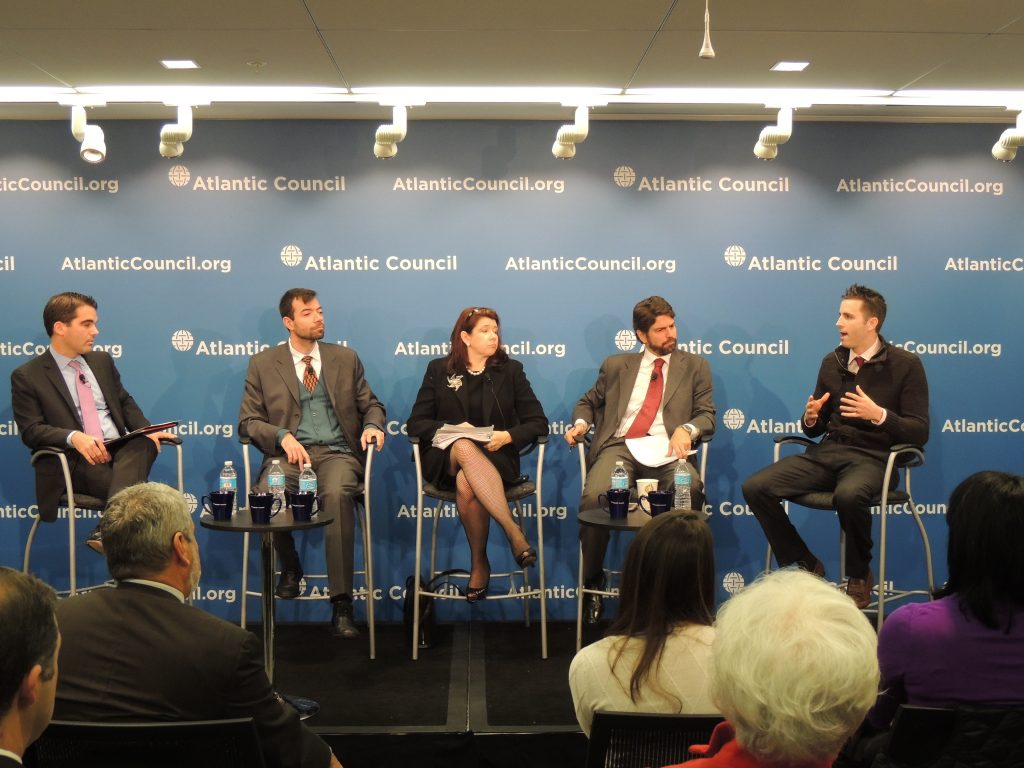 Brazilian President Dilma Rousseff’s second term in office may present an opportunity for Washington and Brasilia to improve relations.

Despite recent bumps in the road in the US-Brazil relationship, Anthony S. Harrington, who served as U.S. Ambassador to Brazil from 1999 to 2001, said he was “cautiously optimistic that we can turn the page again in 2015 and begin to regain the momentum that we saw at the beginning of President Rousseff’s administration.”

“I see evidence of a will in both administrations, in Brasilia and here in Washington, to engage in a meaningful way,” Harrington told policy specialists, business executives and others at a forum hosted by the Atlantic Council and Brazil-US Business Council on January 14.

Vice President Joe Biden’s participation in Rousseff’s inauguration on January 1—the highest-level US presence at an inauguration in Brazil in decades—is the most recent evidence of this will.

The US and Brazil share much in common, including history, culture, and outlook, “even though far too often it looks like we stand with our backs to each other,” said Peter Schechter, director of the Atlantic Council’s Adrienne Arsht Latin America Center.

In her first term, Rousseff postponed a planned state visit to Washington in 2013 following reports that the US National Security Agency had spied on her personal communications.

“The distractions of the last eighteen months have been disappointing for those of us who have worked to advance this bilateral relationship,” said Harrington, who currently serves as chairman of the managing board and head of the Brazil and Latin America practice at the Albright Stonebridge Group.

Rousseff told Biden that she now plans to visit the US at the end of September.

She has sent other signals that she wants a better relationship with Washington in her second term.

Her decision to name Mauro Vieira, Brazil’s ambassador to Washington, as foreign minister, is expected to re-energize the bilateral relationship. Vieira swaps roles with Luiz Alberto Figueiredo Machado. “It couldn’t be better to someone who wants the strengthening of the relationship between the US and Brazil to have Ambassador Vieira as the new foreign minister,” said Raul Juste Lores, Washington correspondent for Folha de São Paulo.  “It doesn’t hurt to have someone with a good Rolodex of Washington ties,” he added.

Vieira’s chief of staff, Júlio Bitelli, has served as a political counselor at the Brazilian Embassy in Washington. “Two among the three most powerful diplomats now in Brazil have great experience in Washington. That’s good news,” said Lores.

Vieira’s main challenge will be at home where the budget of the Ministry of Foreign Affairs has been cut in half over the past two years, said Lores. “His challenge is to convince President Dilma of the importance of foreign relations,” he added.

This has been “historically a challenge” with Rousseff, said Jason Marczak, deputy director of the Atlantic Council’s Adrienne Arsht Latin America Center, who moderated the discussion.

Meanwhile, President Barack Obama’s decision to restore diplomatic ties with Cuba after five decades presents an opportunity for Washington to reinvigorate its relationships across Latin America, including with Brazil.

Lores said Cuba policy has, for decades, emboldened the “two extremist sides in US-Brazil relations—the ones who see a communist threat everywhere… and leftists who see an American empire everywhere. These two sides were dominating the conversation for too long.”

While the US-Brazil relationship has suffered some hiccups at the political level, contacts at the people-to-people and business-to-business levels have been robust. The number of Brazilian students studying in the US has has risen sharply in the past two years, according to a report by the Institute of International Education.

“The number of new relationships that have been set up, university to university, is already creating in the research environment at the university level a very natural flow back and forth among students and professors, particularly in the sciences,” said Nick Sprague, vice president, legal and institutional relations, at Braskem America.

Early in her second term, Rousseff is expected to be preoccupied with domestic challenges, specifically related to the economy.

A kickback scandal involving Brazil’s state-run oil company, Petrobras, has become one of the biggest crises for Rousseff. The city of Providence, Rhode Island, has sued Petrobras over investor losses due to the scandal. “There is a potential for a huge impact on the Dilma coalition,” said Sennes.

Brazil also faces challenges in manufacturing, including a drop in demand, high electricity prices, water reliability issues, and a decline in productivity, said Sprague. “On the positive side, Brazil is a huge country and whether the demand curve is trending upward or downward there is always going to be, in total volume, a large demand … At some point in time Brazil is going to be a great place to manufacture,” he said. “For those who are in it for the long term there is going to continue to be a focus on preserving their position and being sure that they will be ready, willing, and able to take advantage of that moment when it comes.”

In March of 2014, Standard & Poor’s credit ratings agency downgraded Brazil. Since then, “the signaling that we see from this economic team is different, and we see this as part of why we also have a stable outlook on the rating even though we downgraded,” said Lisa Schineller, managing director, sovereign ratings, at Standard & Poor’s.

Schineller said US financial markets currently have a pessimistic view of Brazil, as well as other emerging markets. “Putting better policy signals on the table to try and turn around the investment climate and the prospect of taking down some of the trade barriers… some incipient signals coming from the economic team would be positive,” she said.

“Those are the kinds of things the markets are looking for to try and disentangle the cyclical from the structural,” she added.