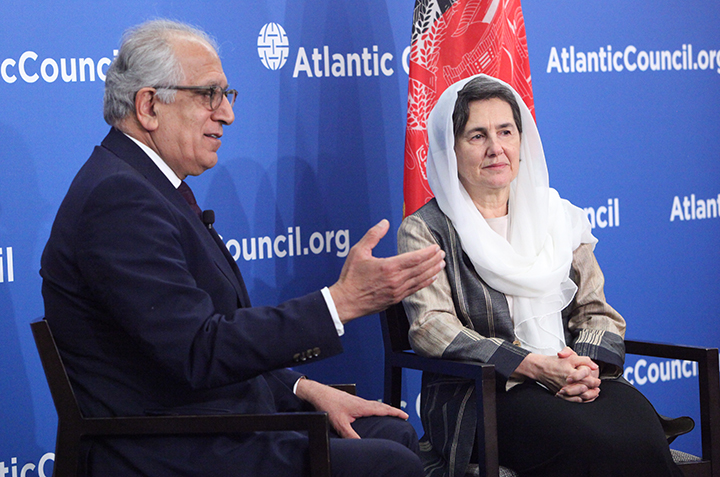 Afghanistan’s First Lady, Rula Ghani, delivered a spirited defense of her husband’s administration on March 31 and warned that “repeated half truths take a life of their own…and suddenly become conventional wisdom.”

Speaking at the Atlantic Council, Ghani described and disputed numerous “myths” about Afghanistan that she said exist in the West, particularly in the Western media.

Journalists, in their rush to deliver a breaking story, hardly have time to check their facts, she said. She took particular issue with a recent Washington Post article that cited what the reporter identified as former members of Afghan President Ashraf Ghani’s administration expressing their discontent with the government in Kabul.

Many of these disgruntled former officials were actually members of former President Hamid Karzai’s administration, said the Afghan First Lady. Ashraf Ghani, a former member of the Atlantic Council’s International Advisory Board, was sworn in as President of Afghanistan in September of 2014. His electoral rival, Abdullah Abdullah, took office as Afghanistan’s first Chief Executive Officer, a post that was especially created under a unique power-sharing deal.

Among the myths that Ghani debunked in her remarks were that the Taliban—the Islamist militants that once briefly ruled Afghanistan—is winning. “Why is it that their leader cannot claim to be Amir al-Mu’minin (Commander of the Faithful)?” she asked, referring to a title claimed by the Taliban’s late leader, Mullah Omar. “The fact is they do not fully control enough territory to be able to make that claim.”

The Afghan government has tried to restart peace talks with the Taliban. Pakistan, China, and the United States are part of this effort, which has so far failed to produce any tangible results. Negotiations fell apart last summer after it was revealed that Mullah Omar, on whose alleged orders the process was being conducted, had been dead for two years.

The Afghan President earlier in March renewed his offer to talk with the Taliban. His wife said it was another myth that peace will come at the cost of the progress made in women’s rights or that women have no say in the peace process.

The number two position on the Afghan High Peace Council is held by a woman—Habiba Sorabi, the former Governor of Bamiyan province—who is “no shrinking violet,” Ghani pointed out. Another woman, Hasina Safi, Director of the Afghan Women’s Network, is also on the negotiating team. President Ghani has publicly declared in the past that the issue of women’s rights is nonnegotiable.

The Afghan First Lady also contested the “myths” that the United States has lost the war and failed in Afghanistan. The United States invaded Afghanistan in October of 2001 to hunt down al Qaeda leader Osama bin Laden in response to the September 11, 2001, attacks.

“Wasn’t America’s aim to help rebuild the country and help it on its way to achieving political stability?” asked Ghani. “Wasn’t the peaceful succession from President Karzai to President Ghani the sign of political maturity?”

Ghani also dismissed lingering claims that the 2014 elections that brought her husband to power had been fraudulent. The United Nations, she noted, conducted three recounts and was unable to discover alleged fraud on an “industrial scale.”

“This is a legitimate government. If you don’t believe in elections maybe the US should stop talking about democracy,” Ghani said.

The national unity government has undergone problems as rival actors have struggled to work together. Ghani, however, said it would be inaccurate to say that the government is not working. “When Angela Merkel took over six months to put together her unity government, nobody in the world blinked. Why should it be different in the case of Afghanistan?” she asked.

Ghani said the Afghan government has made progress on reducing corruption, but counseled caution noting that “it takes time to clean up years of neglect and absence of management. It takes even more time to build up solid foundations on which to build the reforms.”

Ghani, a longtime champion of women’s rights, has found new power in her message as First Lady. She considers the revolutionary Afghan Queen Soraya Tarzi an inspiration, but insists that unlike the late Queen, she has no interest in serving in government nor does she ever offer prescriptive advice to members of her husband’s Cabinet.

Gains made in women’s rights were marred by incidents that grabbed headlines worldwide. A twenty-seven-year-old Afghan woman, Farkhunda, was brutally murdered by a mob in Kabul in March of 2015 after she was accused of burning a Quran. The killing set off unprecedented protests by both women and men who marched demanding justice. In November of 2015, another young woman, Rokshana, was stoned to death after being accused of committing adultery.

Ghani acknowledged both cases adding that “we are far from having solved all the problems and challenges.” The Farkhunda case is being reexamined after concerns that it failed to adequately deliver justice. Ghani said that Afghanistan’s justice system—in which more than 250 women serve as judges—is becoming increasingly fair to women.

In her remarks, Ghani defended the Afghan male noting that “illiteracy does not mean a lack of culture.”

“This is something that people in the West have a hard time” understanding, she added.

Following her remarks, Ghani participated in a discussion moderated by Zalmay Khalilzad, a former US Ambassador to Afghanistan, President of Gryphon Partners, and a member of the Atlantic Council’s Board of Directors.

Ghani warned against development projects that do little more than offer participants certificates, instead of harnessing their newly learned skills; she described cell phones as a useful tool for promoting education as well as business; and said the gains made in women’s rights can only be sustainable if Afghan women remain invested in their success.

Ghani credited the Karzai government with having stopped the civil war that ravaged Afghanistan, but said that when it came to administration it was “not very detail oriented.” Her husband’s government, she said, is now trying to bring some order to that chaos.

The people of Afghanistan want to be able to live peacefully in their villages and cities, said Ghani. “They have the same aspirations as people everywhere in the world.”

Image: “This is a legitimate government. If you don’t believe in elections maybe the US should stop talking about democracy,” Afghanistan’s First Lady, Rula Ghani, said in a strong defense of the administration of her husband, President Ashraf Ghani, at the Atlantic Council on March 31. Following her remarks, Ghani participated in a discussion moderated by Zalmay Khalilzad (left), a former US Ambassador to Afghanistan, President of Gryphon Partners, and a member of the Atlantic Council’s Board of Directors. (Atlantic Council/Victoria Langton)