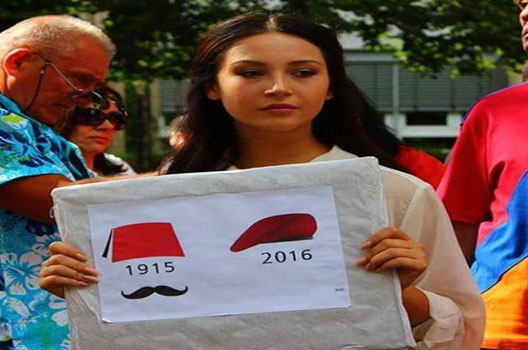 A young protester in Yerevan holding a banner suggesting a historical parallel between the treatment of peaceful civilians by the Ottoman empire in 1915 and the Armenia's special police in 2016.

The events in Armenia from July 17 to July 31 in 2016 and what followed in the early weeks of August highlighted the deep economic, social, and political problems that are facing Armenia today. More alarmingly, they have confirmed without question the country’s slide toward dictatorship and authoritarianism.

It all began with a takeover of a large police compound in downtown Yerevan—Armenia’s capital—by thirty-one civil activists and veterans of the Nagorno Karabakh war who called themselves the “Daredevils of Sassoun”—taking the name from a medieval Armenian heroic epic poem.

Their demands were straightforward: the release of all political prisoners, including their leader Jirair Sefilian, who was arrested on June 20 of 2016, and the resignation of Armenian President Serzh Sargsyan. The timing of the capture is rumored to be linked with the outcome of the four-day conflict with Azerbaijan in April—which ended with minor territorial losses for Armenia—and the expectation of a Russian-imposed peace plan in Karabakh, which is seen as a defeat in the eyes of many Armenians.

Serzh Sargsyan, a former chief of Armenia’s National Security Service (NSS)—the successor of Armenia’s KGB—came to power as a result of two rigged elections in 2008 and 2013. Sargsyan singlehandedly controls the executive, legislative, and judicial branches of the government and oversaw the modification of the Armenian constitution in December of 2015 that allows him to rule the country as prime minister beyond 2017 without a term limit.

The use of force by the Daredevils was not a mechanism for overthrowing Sargsyan per se, but instead was intended to spark a nation-wide peaceful protest as a way of replacing his regime, which has brought the economy to its knees and resulted in massive emigration.

They have been at least partially successful in creating this movement, which is now led by a group of prominent intellectuals and opposition politicians. In a recent BBC poll, virtually everyone surveyed approved the actions of the Daredevils, calling them “heroes.”

The takeover brought interesting facts about Armenia’s law enforcement to the limelight. The search of the compound during the capture revealed a presence of a wide police informant network, pornographic materials, and evidence of a prostitution ring being housed on the compound.

The Sargsyan regime’s meager and ever-declining social welfare and developmental expenditures are no match when compared to its budget for police and security. For a small country with an estimated population of 1.8 million, the government maintains a 20,000-strong well-armed and equipped special police force and a decentralized private army of 7,000, consisting of oligarch bodyguards, gangs, and other criminal elements. These plain-clothed individuals—often found to be armed with metal bars and clubs—lead the charge against civil protesters.

Since the takeover of the police compound, the regime has carried out mass arrests and detained individuals that they suspect as having ties with opposition elements—including peaceful protesters exercising their constitutional right to assemble. During the late two weeks in July, hundreds of people—including foreigners—were arrested and placed into large walled-in concentration areas for almost a day, deprived of any food or medical services. These instances are well-documented by independent media outlets.

Among the leaders of the opposition civil movement held by the police and the NSS for a two-month pre-trial detention are a former presidential candidate, a former member of parliament, a current member of the Yerevan city council, a board member of a think tank, and a blind Diaspora activist. Those detainees fortunate to be released from captivity complain of grave mistreatments and abuse. These allegations have been confirmed in a report published by Human Rights Watch that states: “Police beat many detainees, in some cases severely, and in some cases did not allow them to get prompt medical care for their injuries.”

Targeting journalists on July 29 by pro-government brigades was also part of the tactics to show that the regime knows no limits to what can be done to intimidate the population. The government has also pursued the family members of the gunmen who carried out the capture of the police station, used indiscriminate detention, scare tactics, and outright brutality. Since the surrender of the gunmen, following their laying down arms, the visits by defense lawyers and family members have been banned in many cases.

There is no doubt that police brutality following the capture of the police station and the ongoing manhunt for peaceful protesters in Yerevan will expand anti-government action until a different societal equilibrium is found. A recent report published by Freedom House expressed a similar sentiment: “The surprising public reaction to the takeover…has unhinged expectations about what is permissible in the realm of antigovernment mobilization.” The regime has lost the monopoly on violence.

While ostensibly critical of the actions of the gunmen, Western governments did little to ease the fate of the civil protesters—who were being crushed by the regime’s despotic police machine. The asymmetry between rhetoric and action was similar to that observed following the constitutional referendum in December of 2015 and during nation-wide elections prior to that—with no tangible action taken against the regime or individual election falsifiers.

Despite consistent evidence of election fraud and brutal crackdowns of opposition protests that typically follow, Western powers continue to work with Sargsyan. In effect, they are allowing his government to get away with human rights violations, especially by depriving Armenian citizens their most fundamental right to freely elect a government.

While Western governments have provided relatively little institutional support to Armenia’s civil society and opposition groups over the years, they have provided significant support to Armenia’s repressive police force through training and equipment. Regarding this, Transparency International has called on the international community to halt all foreign funding for the Armenian police.

The rapidly changing reality on the ground

The Sargsyan regime has made matters so much worse for the Armenian people, that a society which, by and large, condemned the shootings in the parliament on October 27 of 1999, now almost unilaterally supports the armed Daredevils.

The geopolitical implications of the events taking place in Armenia today are difficult to understate. Turkey’s recent accusation of the Unites States’ complicity to topple Turkish President Recep Tayyip Erdoğan’s government will likely push Turkey farther away from NATO and closer to Russia. Ironically, Armenia might be forced to enter an alliance with its historic enemy and an unreliable partner. Such a combination already played out very poorly for the country in 1920. Once Armenia is absorbed into the coalition, Georgia and its sovereignty will be at stake next.

The West’s role in assisting Armenia’s civil society movement and uphold the country’s sovereignty might be the only chance left to weaken an impending Russian-Turkish alliance while have an ally in the region that will support Georgia and secure Iran’s access to Europe through friendly territory.

The Russian plan to force Armenia to relinquish territories in Karabakh and to deploy its so-called peacekeepers in the region—expected to be occur soon—will have grave and irreversible consequences for Western interests in the region and, therefore, should be prevented. This can be done by providing both moral and tangible support to those on the barricades in Armenia today.

In a statement published on August 4, a number of Armenian diaspora groups and intellectuals stated: “…two decades is long enough to prove that corruption only breeds corruption, leading to a failed state and cynical society that has nothing left to lose. As John F. Kennedy wisely admonished, “Those who make peaceful revolution impossible will make violent revolution inevitable.”

The international community should follow the lead of human rights groups and condemn the actions of Sargsyan’s regime. The West should distance itself from Armenia’s corrupt ruler as soon as possible and join progressive voices that are calling for his resignation.

Continuing to work with Sargsyan is not only morally wrong but risks alienating the citizens of Armenia. This would inevitably push them closer to Russia, a move that the West cannot afford in this volatile region and unstable times.