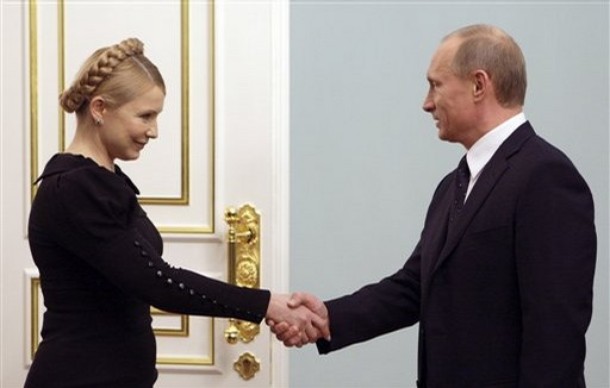 It appears, once again, that Russia and Ukraine have come to an understanding that will resume the flow of gas to Europe. AFP‘s Alexander Osipovich:

Russia and Ukraine announced a gas agreement on Sunday that they said would “shortly” allow a resumption of supplies to Europe, but questions remained on how and when the deal would be implemented.

“We have reached an agreement,” Russian Prime Minister Vladimir Putin said in televised comments after marathon, late-night negotiations with his Ukrainian counterpart Yulia Tymoshenko in Moscow. “Shortly the gas transit — as the Ukrainian side assures us — will be resumed,” he said, speaking alongside Tymoshenko. Tymoshenko said Russian and Ukrainian state gas firms had been told to draw up agreements by Monday and “immediately after those documents on transit and gas prices are signed, all transit of gas to Europe will be resumed. Her office later said the documents would be signed Monday.

Russia got most of what it wanted:

Analysts described the gas deal as it was outlined by Putin and Tymoshenko as a nominal victory for Russia, but one that came at a very high price for both sides. “The toll on Russia’s reputation as a credible supplier of energy is huge,” said Maria Lipman, a political analyst at the Carnegie Moscow Centre.

Under the terms of Sunday’s deal, Ukraine agreed to shift to full European prices for Russian gas in 2010 after years of enjoying prices significantly lower than those paid by Russia’s European customers. “Starting from January 1, 2010, Ukraine and Russia will shift to European prices on gas and gas transit,” Putin said. But in 2009 Ukraine would get a 20-percent discount relative to the European price, as long as it kept the tariffs it charges for the transit of Russian gas to Europe at the 2008 level, he said. Even with the discount, in the short term Ukraine will pay much more for gas than it did last year.

There are worse fates than continuing to get an inexplicable bargain on gas and postponing another year having to pay what others do for the same commodity.

Having been down this road before, Europe is tempering its enthusiasm:

In Brussels, the EU cautionsly welcomed the announcement of a deal but said the real test would be whether Russian gas quickly reached European consumers. “We welcome the announcement that there is the political agreement but we are also quite careful because there have been too many agreements broken and promises not kept,” said a spokesperson for the Czech presidency of the EU.

Further, Lynn Berry writes for AP, “relief for millions of frustrated consumers and businesses could be days away. The deal on 2009 gas prices is not likely to be finalized until at least Monday. If Russia turns on the taps immediately after the signing, it could take another day for the gas to travel hundreds of miles across Ukrainian pipelines to eastern Europe.”