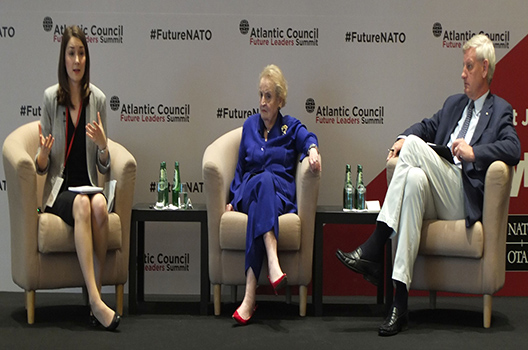 The challenge posed by a revanchist Russia and Europe’s migrant crisis will be at the top of the agenda at NATO’s Warsaw Summit on July 8 and 9, according to former US and European diplomats.

“[The] NATO summit is going to be about…reassurance, understanding how to protect the members of the Alliance, and also make clear…to continue and to enlarge the dialogue with the Russians,” said Madeleine K. Albright, a former US secretary of state who is an honorary director of the Atlantic Council’s board.

“We have to try to do both things at the same time: reassure our allies and be open to having discussions with the Russians,” she added.

The NATO summit is being held in the wake of the June 23 referendum in which British voters favored the United Kingdom leaving the European Union. In addition to the so-called Brexit result—which has spurred isolationist sentiment in far-right European political parties—the ongoing migrant crisis and continued revanchist behavior from Russian President Vladimir Putin are expected to drive discussions at the two-day NATO summit. This trinity of challenges has led some experts and diplomats to denote this particular summit as the most critical meeting of NATO member states “since the end of the Cold War.”

Albright and Bildt pointed to the value that technology and globalization can provide in sustainably addressing the seemingly overwhelming challenges.

“Globalization allows you to learn something about others, which would show our commonness while we’re able to maintain our distinct features,” said Albright. She cautioned, however, that technology needs to be seen as a “double-edged sword” and contended that citizen engagement is crucial for building institutional capacity.

“There needs to be more contact with people, with citizens of countries. That is what has been missing here.  And part of it is how to make that happen and whether the technology can’t be used better in order to involve more soundings of people’s views,” said Albright.

“There is no faith in the institutions. And it’s one thing to listen to people, it’s another to actually hear what they’re saying. And those are the things that need to be fixed,” she added.

Albright noted that international institutions—in particular NATO and the European Union—need to place a stronger emphasis on involving nongovernmental organizations in the decision making and engagement processes to address global crises.

“Nongovernmental organizations need to be at the table. We always think of non-state actors as just terrorists, but the bottom line is there are many dimensions to non-state actors. They have to be brought into the system,” said Albright.

“Security in the twenty-first century is multidisciplinary. It requires a comprehensive approach that leverages all the elements and national power, and the expertise of new stakeholder groups, including business, technology, media, art, and civil society communities,” said Kempe.

“The one thing that’s certain for the decades ahead is uncertainty…we’re going to face a number of shocks,” he added.

The long-term consequences borne out of the migrant crisis, Russian military advances, and sharpening isolationist sentiment across Europe will arguably drive institutional reform where needed, according to Albright and Bildt.

“I don’t think we have a crisis of the West, but we clearly have a crisis of the institutions of the West, be that the European Union or be that other institutions, when it comes to adapting to…or going back to a situation that’s going to be somewhat less stable, somewhat less predictable, and somewhat even more dangerous than we had in the past,” said Bildt.

Russia’s foreign policy stance plays a large part in jeopardizing the reputation of institutional power, said Bildt, noting: “We have Russia, by its aggressive actions—Ukraine, primarily, but before that as well—has challenged the fundamentals of the European security order.  And if you start to violate the security order at one spot, it is brittle everywhere else.”

At Warsaw, the twenty-eight NATO member states are expected to approve a plan of “persistent presence” on the Alliance’s eastern flank. An estimated 4,000 troops will be deployed in the Baltic States and Poland. Following the announcement of the plan, Russia stated that it would deploy approximately 30,000 troops in bordering regions.

Albright and Bildt noted that with such behavior of deterrence and revanchism, the time to secure a stable international climate has never been more crucial.

“We need to preserve, defend, and enlarge the scope of our values of open societies, open Europe, and an open world that prevents us from falling back on the mistakes of the past,” said Bildt.

Image: From left: Ashlee Godwin, committee specialist on the UK House of Commons Foreign Affairs Committee, moderates a panel with Madeleine K. Albright, a former US secretary of state, and Carl Bildt, a former prime minister and minister for foreign affairs of Sweden, at the Atlantic Council's Future Leaders Summit in Warsaw on June 7. (DG ART Projects | www.dgart.pl)