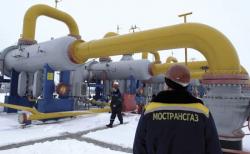 Moscow and Kiev are once again on a collision course over gas supplies. WaPo:

Russia and Ukraine appear to be heading for a new collision over natural gas that could disrupt supplies to Europe this winter, with Russia threatening to stop selling the fuel to Ukraine on Jan. 1 if it does not repay more than $2 billion in debt. Russia called on European nations Tuesday to pressure Ukraine to guarantee the delivery of Russian natural gas to the continent. The appeal, made by Energy Minister Sergei Shmatko, came as negotiators prepared to meet in Moscow in an attempt to resolve the politically tinged standoff. Russia briefly reduced its supply of gas to Ukraine in March and shut it down for a few days in January 2006. But the latest disagreement could be more severe because the global financial crisis has battered both countries and left them hungry for funds.

Western Europeans are naturally worried. As Italy’s AGI notes, “If Russia cuts of its gas supply to Ukraine it will be difficult to guarantee gas supply to Europe.” Germany is not taking any chances, Deutsche Welle reports.

Germany has kept its stores of natural gas full as it warily follows a new year-end dispute between Russia and Ukraine. At the same time, Russia is warning that the era of cheap gas is coming to an end. Germany’s economics ministry spokeswoman said gas distributors had assured Berlin there would be no shortages in Germany because of the dispute. “The storage is pretty full,” she said on Tuesday, Dec. 23, referring to the rock formations into which Germany injects vast quantities of Siberian natural gas so that it has gas to heat buildings and run factories through the winter.

France 24 has an interesting report on this which has been posted to YouTube under the header “Russian New Year’s present to its neighbours:

Of course, as Moscow Times reports, this works both ways: Russia desperately needs the money.

Ukraine’s continued failure to pay for gas could hurt Russia’s economy, as the funds could be reinvested at home, Gazprom spokesman Sergei Kupriyanov said Monday. “The non-payments for gas are delivering a blow mainly to those sectors in which Ukrainian goods compete in the Russian market, namely steel, heavy machinery, power engineering and electrical engineering,” Kupriyanov said, Interfax reported. “This cannot leave those sectors and those who work in them unaffected.”

For its part, Ukraine is offering up creative solutions. AFP:

Ukrainian President Viktor Yushchenko said Tuesday Ukraine could return gas now stored in underground reservoirs to Russian energy giant Gazprom as part of a debt repayment. “Either we pay for the gas we have stocked or we change the owner of the gas,” he told a press conference. […] Ukraine has stocked large volumes of Russian gas ahead of an expected surge in demand in the winter. A senior Ukrainian official on Monday estimated that 16 billion cubic meters have been stored. Yushchenko said part of Ukraine’s gas debt had already been settled by drawing on hard currency reserves held by the Ukrainian National Bank (BNU). In addition to the possible return of gas held in storage to Gazprom as reimbursement, parts of the debt would also be re-structured, he said. “We agreed that for some of the debt we would use BNU reserves,” of which about 800 million dollars has been paid to Gazprom, he said. “A portion of the debt will be restructured” over several months, according to Yushchenko, to allow Ukrainian consumers to pay for the gas they use in January and February.

Thus far, AP reports, no compromise has been reached.