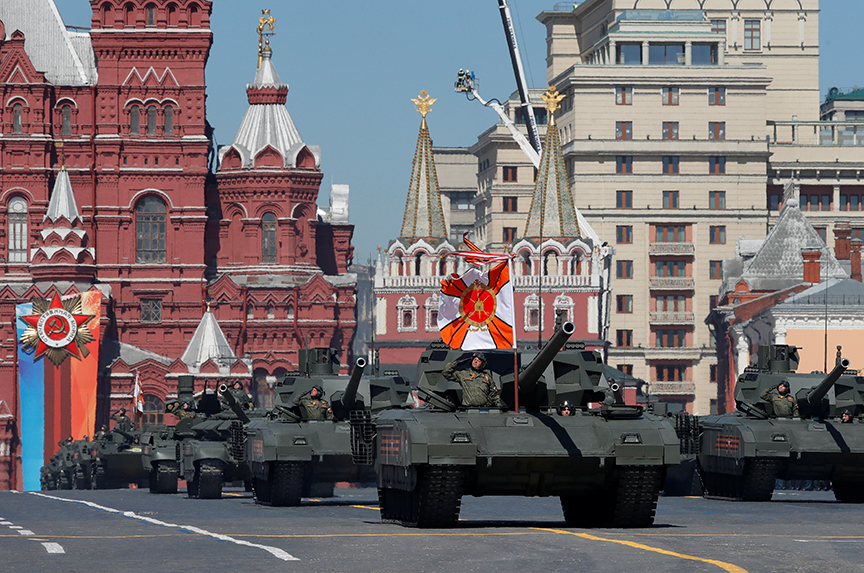 Russian tanks participate in the Victory Day parade, marking the 73rd anniversary of the victory over Nazi Germany in World War II, at Red Square in Moscow on May 9. (Reuters/Sergei Karpukhin)

BRUSSELS — The May 2 announcement by SIPRI, the Stockholm International Peace Research Institute, that Russia’s defense budget in 2017 fell by 20 percent made many headlines across the West, with predictions of major fallout for Moscow’s military modernization goals, operations, and tactics and its international influence. However, the reality is far from that scenario as most defense economists and NATO officials who follow the subject know.

“Today happens to be Victory Day in Russia,” a NATO planner who spoke on the condition of anonymity told me on May 9, referring to Moscow’s annual military display in commemoration of Nazi Germany’s defeat. “I don’t think you’re going to see the parade downsized by a fifth.”

Indeed, that 20 percent defense spending figure has to be put into perspective, which is not hard to grasp. It was a nominal cut relative to the previous year when, in late 2016, the Kremlin upwardly amended its defense budget by some 800 billion rubles to make a one-off payment of a standing state loan used to finance armaments programs. The SIPRI report explained as much, for those who troubled to delve into its details.

Thus, there was no 20 percent fall in Russia’s defense budget in actual terms for 2017.  There was, however, a small real drop in spending compared to 2016 of around 3.7 percent, from 2.98 trillion rubles down to 2.87 trillion.

The real questions circle around this more modest decline and what it might mean. Is it the start of a long-term trend, a limited medium-term adjustment to Russia’s defense budget or just a blip on the graph?

More importantly, if it does herald a trending down, however slight, in Russian defense spending, does this suggest any real operational or equipment impact on the country’s military and, consequently, implications for the West regarding changes to its defense and strategic assumptions?

No, no, and no, according to my NATO sources. And not according to SIPRI either, which estimates that Russia’s actual spending on defense in 2017 was much higher—as much as 35 percent higher—than its official defense statistics state.  Why? Because, as SIPRI has noted for some time in its annual “Military Expenditure Database” reports, Moscow does not include in its defense budget the cost of certain activities with a clear military dimension to them. These include Russia’s paramilitary forces and assets, its Federal Security Service (FSB) personnel stationed along the country’s borders, and other costs.

So what is behind the 3.7 percent decline after a ten-year period of strong defense spending and military modernization in Russia?  Are low oil prices and the West’s four-year-old arms and economic embargos to punish Moscow for its aggression against Ukraine finally biting into its defense budget? Is Russia’s back against the wall?

“The spending figures of the last few years indicate that Russia probably considers it has made good progress [regarding military modernization]. It may be that they now consider they’ve reached a point where they can delay some of their programs. Nothing the Russians have said points toward a reversal of what they have decided on for transformation. They have the wherewithal to make those choices, but they are by no means being forced by circumstances to do this,” the NATO planner added.

Another NATO source, who also spoke on background in order to freely discuss the issue, pointed to a complementary interpretation. “It’s fiscal prudence,” the source said. “The government is choosing not to spend quite so much on defense due to policy preference: they want to modernize the military to a certain point but they also want to develop economic resilience in case the embargos continue or expand.  I conclude that the more fiscally conservative folks have gotten [Russian President Vladimir] Putin’s ear.”

A final factor that suggests continued stability for Russia’s military ambitions is how the country spends its defense rubles. Whereas NATO’s defense spending guideline for the allies is 2 percent of GDP and, within that, 20 percent set aside for investment in equipment and capabilities, Russia devotes 50-60 percent of its annual defense budget to investment. While its absolute defense budget may be smaller than that of France or the United Kingdom, its far higher investment rate means many of its capability programs will be unscathed by defense cuts, as long as the latter remain modest.

“That points to continual improvement in capabilities, even if the overall curve rises modestly,” said the NATO source. “Also, don’t forget that—relative to what the dollar buys for the DoD—the ruble buys a lot more equipment within Russia because it’s a lot cheaper.”

In sum, predictions that the 2017 cut in Russia’s defense spending heralds a decline in Moscow’s military strength are premature by a long shot. Russia’s goals for its strategic nuclear posture, general forces, precision strike, anti-access/area denial, and rapid reaction capabilities remain unaltered, as do Moscow’s military tactics and operations.

To the contrary, said the NATO planner, “I see no trend change in scale or complexity of Russia’s strategic annual exercises, its support for Syria or separatists in Ukraine, South Ossetia or whichever frozen conflict. The hybrid warfare tactics and snap exercises continue, the information warfare increases and there is no drawdown [of troops] in their Western military district.”

So what does all this mean for NATO?

“We carry on as before,” said the planner.