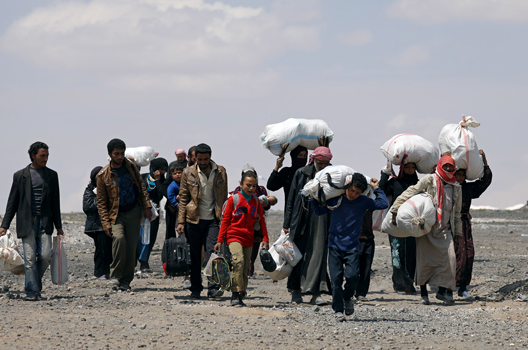 The proposal for de-escalation zones in Syria, which will enter into force at midnight on May 5, is unlikely to be effective in the long term, according to an Atlantic Council analyst.

“Maybe” the agreement will temporarily have a demonstrable effect on lowering the number of civilian deaths in Syria, said Faysal Itani, a senior fellow with the Atlantic Council’s Rafik Hariri Center for the Middle East, speaking in an interview with the New Atlanticist. However, he added, “I don’t see the thing lasting.”

The de-escalation zones, a Russian and Turkish-led initiative, backed by Iran, were agreed upon in a deal signed on May 9 as part of the ongoing United Nations Syria peace talks in Astana, Kazakhstan. However, few details regarding implementation and monitoring of these zones have been released. The United States is not party to the agreement, and has expressed initial skepticism.

Located in the Idlib province; parts of Homs province; southern Syria; and the outskirts of Damascus, the de-escalation zones, distinct from safe zones in their lack of protective measures, are intended to bring about a cessation of hostilities in the ongoing civil war and restore a sense of “normalcy” to the country, said Itani. Nearly 450,000 civilians have died since the outbreak of the war in 2011.

Itani described how, “since the beginning of 2016, we had a series of ceasefires that all broke down for a number of reasons, but largely because of regime violations that the Russians proved either unwilling or unable to prevent or punish.” Moscow intervened in the conflict in 2015, providing military assistance to Syrian President Bashar al-Assad’s regime. Former US Secretary of State John Kerry continually tried to negotiate cessations of hostilities to prevent civilian casualties. None were successful.

“I see this [proposal] as the latest in that series,” said Itani.

He said that the two fatal flaws of the de-escalation agreement are in its omissions: “The first omission is the Syrian people, the second is the enforcement mechanism.”

No Syrian stakeholders—rebel or regime—were party to the negotiations. Syrian opposition groups have rhetorically rejected the agreement, because, according to Itani, it secures none of their fundamental interests such as humanitarian aid flows, the release of political prisoners, or the lifting of sieges.

More important, Itani said, is the lack of any teeth to the agreement. “The problem is there is no clear enforcement mechanism, or any way to extract costs from people who cheat or break the rules,” he said.

According to Itani, “What this technically means is that the entire agreement rests on the goodwill of guarantors, and the guarantors in this case are the Turks, the Russians, and the Iranians who are belligerents in the conflict, and backers of the fighting sides.” The Turkish government supports a number of the Syrian opposition groups, while Russia and Iran back the regime.

“This is problematic, to put it mildly,” he added.

In terms of governance of the de-escalation zones, “the agreement stipulates that the respective sides can assign some force to monitor these areas, or install their own people,” according to Itani. While “that is left vague,” he said, “there is a provision there.”

While the agreement has a number of international stakeholder from both sides of the conflict, Itani said: “the notable thing about it is that the United States is not one of the countries taking part in the initiative.” However, he added, “the United States kept its distance from the agreement,” presumably as a result of its lack of faith in the success of the de-escalation zones.

US Secretary of State Rex Tillerson will meet with his Russian counterpart, Sergey Lavrov, in Alaska on May 10. They are expected to discuss the de-escalation zones. According to Itani, in these talks, “they’ll hope for the best, but there’s a lot of mistrust.”

It seems unlikely that the United States will engage in this initiative, unless there are a slew of infringements, or a repeat of a chemical weapons attack like the one carried out by the Assad regime in April. The United States responded to that attack with a missile strike on a regime air base.

As for other actors in the region, “anyone who is not already involved is only going to get involved if the United States does,” said Itani.

Adding to Itani’s skepticism regarding the success of the de-escalation zones is the inclusion of a provision allowing Russian and Syrian regime forces to continue to fight groups they consider terrorists. Both the regime and Russia’s ministry of foreign affairs have claimed that they will continue to bomb the Islamic State of Iraq and al-Sham (ISIS) in other parts of Syria. However, “ISIS doesn’t matter because ISIS is in the eastern part of the country,” said Itani.

He said that “the dangerous one is Hay’at Tahrir al-Sham [HTS], the al Qaeda derivative once known as Jabhat al Nusra.” HTS is active “in all the territories covered by the agreement,” even embedded with some opposition groups that are party to the conflict, “but the regime insists that they retain the right to attack [HTS].”

With the creation of de-escalation zones in the south of Syria, Itani said that “there’s a territory that you cannot fight in, but [HTS] is still there. I think the regime is making sure it retains the option of escalating when it wants to.”

According to Itani, this dynamic will likely devolve into a situation in which HTS, now the only group targeted by all sides, will attempt to provoke a fight with the regime. He predicted that the regime will either respond or initiate hostilities itself, continue fighting in the region, say the ceasefire is over, yet place the blame for its failure elsewhere. He asked: “How do you have a safe zone in Idlib, but go after al Qaeda?”