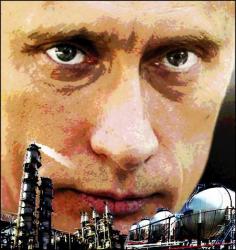 Anders Åslund asserts that “The Putin model of crony state capitalism is dead” and consequently “the juggernaut of emerging economies in Brazil, Russia, India and China is being reduced from BRIC to BIC.”

For years, the structure that Vladimir Putin crafted looked invincible, with its steady, high growth rates and effective, mild repression. But the system only distributed ample oil rents to the elites and the ordinary people, creating neither moral nor economic value.

Today the bill is due. In 2009, Russia’s gross domestic product plunged 7.9 percent, even though Moscow had the world’s third-largest international currency reserves. Russia performed the worst among the Group of 20 leading global economic powers. And as Russian elites realize that the Putin model has failed, opposition to the government is mounting.

Russia’s problem is larger than day-to-day constraints. Its public finances are in good shape; its current account is sound. But during Putin’s second term as president, from 2004 through 2008, a substantial renationalization of business took place, spearheaded by his confiscation of the Yukos oil company. Much of Russia’s economy is now dominated by monopolistic state corporations such as Gazprom, Russian Railways, Russian Technologies, Transneft, Rosneft and a handful of banks. They are run by Putin confidants who are close friends from his days in the KGB.

These big state corporations accounted for much, if not all, of the decline in Russia’s GDP last year. They are a black hole of inefficiency. Their leaders do not know how to run a company, which leads to poor financial results, huge state subsidies, miserable services and enormous corruption.

When oil prices were high enough to keep the circus going, elites did not complain. The government’s tactics in the Yukos case, including fabricating charges against former company chairman Mikhail Khodorkovsky, had taught them to keep quiet, and besides, they were doing very well financially. Today, however, corruption spurred by state corporations is causing Russia to lag behind other countries.

A cacophony of elite voices are offering critiques, to the point that 2010 already bears some resemblance to 1987, the year Mikhail Gorbachev’s glasnost policy of openness came to life. Igor Yurgens’s Institute of the Contemporary Development, which is chaired by none other than Russian President Dmitry Medvedev, has taken the lead with a full-fledged call for Western liberalism, advocating the dissolution of the Interior Ministry and the FSB, successor to the KGB. On Feb. 18, Medvedev followed its cue and sacked 17 police generals. In December, the old Kremlin courtier Gleb Pavlovsky even called on Putin to retire, saying the prime minister is obsolete.

Although Medvedev is widely deprecated domestically and abroad, it can be a gift to be underestimated. The president has criticized state corporations, law enforcement and corruption in public, providing openings for others to fill in, and he offers an alternative platform of power.

When the other shoe drops — that is, when China slams into a wall under the weight of its own form of crony capitalism — the case for the Beijing Consensus, for industrial policy, and for other alternatives to economic regimes built on a firm foundation of grassroots indigenous entrepreneurship — will collapse. But I’m obviously biased, so go read Carl Schramm/

Robert Amsterdam, the lawyer who was mysteriously arrested and expelled from Russia in the midst of the Yukos trial,  thinks the internecine struggles among Russia’s political elites are interesting but believes “it is pretty far-fetched to claim that Russia is on the brink of any major change right now.”

Certainly, we need more information.  As True/Slant‘s Mark Adomanis reminds us in an otherwise unrelated piece, Åslund has been a stand-alone thinker on Russia for quite some time — arguing for a massive restructuring of the system while most in the West were cooing over the prospects of post-Soviet Russia joining the Western economic community.

Still, while I’m skeptical of a new wave of reform sweeping over Russia in the near future, I share Åslund’s belief that the “R” in “BRIC” doesn’t belong.  Then again, it never did.  Aside from artificial surges brought on by brief spikes in the world energy market, Russia remains a developing economy.