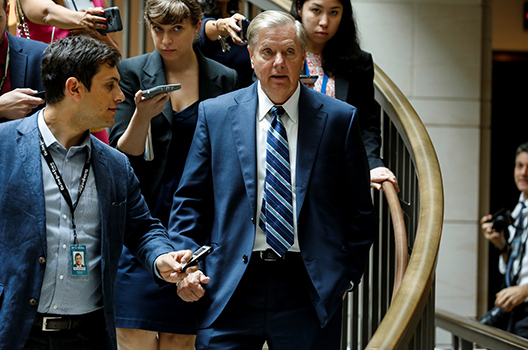 On September 6, the US Senate Banking Committee will hear expert testimony on draft Russia sanctions legislation, including the Defending American Security from Kremlin Aggression Act introduced this summer following US President Donald J. Trump’s summit with Russian President Vladimir Putin in Helsinki and amid reports that Russia continues to interfere in the run-up to the midterm elections in November.

The late Sen. John McCain praised this bill in an August statement, saying “until Putin pays a serious price for his actions, these attacks on our democracy will only grow. This bill would build on the strongest sanctions ever imposed on the Putin regime for its assault on democratic institutions, violation of international treaties, and siege on open societies through cyberattacks and misinformation campaigns.”

McCain was right. As noted before, inconsistent words and actions have precluded the Trump administration from establishing a sufficient deterrence to Russian aggression. The legislation currently making the rounds in Congress is a clear attempt to provide that deterrence.

Among the headline sanctions in the legislation under consideration is a provision that would prohibit US persons from dealing in new issuances of Russian sovereign debt. The Senate, however, is reportedly considering removing those sovereign debt sanctions, measures that the US Treasury Department warned earlier this year could risk significant spillover effects. This is the wrong conclusion and taking out this provision would significantly weaken any new legislation.

Moscow uses its sovereign debt issuance as a geopolitical tool—similar to its use of energy resources as a weapon. Sovereign issuance is a vehicle to replenish foreign exchange reserves that provide a significant release valve to mute the impact of existing sanctions. The Kremlin has also reportedly used money raised from sovereign borrowings to support its sanctioned banks via loans through intermediary banks. Additionally, Moscow designs the timing and public messaging of issuance to advance its “business-as-usual” narrative by demonstrating at moments of sanctions implementation or otherwise rising international pressure that Russia can raise capital on international markets despite sanctions. In reality, much of this supposedly “foreign” investment is opaquely and circuitously funneled from Russian banks and investors.

Sovereign debt sanctions would send a strong signal—and likely provoke a moderate correction—to a market that seems to have generally priced in an assumption that the Trump administration would not take aggressive sanctions action against Russia. More critically, it would impair Moscow’s ability to cheaply restock foreign exchange, thereby making its domestic policy choices more constrained. The Kremlin could keep giving Putin’s cronies handouts or take actual steps to promote broad economic growth, but likely would not be able to do both. Most importantly, it would be a strong measure to impose costs on Russia for its interference in US elections and could be effective leverage to negotiate a cessation to Moscow’s continued aggression.

The general concern with spillover effects from targeting sovereign issuance was voiced in a congressionally-mandated Treasury Department report that was made public in February. The report was drafted solely by the international affairs division within Treasury, economists whose institutional role is to be habitually cautious, warning that “the magnitude and scope of consequences from expanding sanctions to sovereign debt and derivatives is uncertain and the effects could be borne by both the Russian Federation and US investors and businesses.” These starkly stated concerns were a departure from the position of the Obama administration, which was notoriously coy on questions of sanctions regarding Russian sovereign issuance.

Three points underscore our view the Treasury report was overly cautious and the consequences of sanctioning new Russian sovereign debt issuance would be effective and containable.

First, investors and financial institutions have now spent four years learning to comply with US and EU financial sanctions and have often stayed away from direct participation in Russian issuances.

Second, the proposed sanctions would appropriately only prohibit dealings in new issuance, not existing holdings or secondary trading, which would greatly reduce the impact to current investors.

Finally, despite its moribund economic growth potential, the Russian fiscal position is relatively strong. This both provides buffers to absorb shocks and reduces the exposure of international investors.

Anders Åslund, a senior fellow with the Atlantic Council’s Eurasia Center, points out that “given that Russia’s public debt is only 13 percent of gross domestic product (GDP), this is not a draconian though quite important sanction.” Moreover, of that debt stock, only about 8 percent or $11 billion is held by US investors, while less than a third is held by all foreigners combined and some of these may be Russian proxies. Thus, while existing debt would likely decline in value, the limited participation of foreign investors means that the brunt of the impact would be moderate and borne by Russia.

Broadly, power is on the side of the United States and its allies when applying financial pressure on regimes that are viewed by investors as entailing idiosyncratic risks. From negotiations over Greek debt relief to financial sanctions on Venezuela, the geopolitical leverage of recalcitrant governments is often weakened by the fact that volatility in their domestic markets does not significantly spill over into international markets. Similarly, when the Russian stock market fell roughly 10 percent on April 9 after Treasury announced the sanctions on RUSAL, among others, the US stock market closed slightly higher. Again on August 2, when the latest proposed sanctions bill became public, Russian markets were lower and US markets were higher. Similar trends were seen in other markets, with the ruble weakening while international bank stocks and European markets remained stable. This asymmetry of sanctions impact—American strength compared to Russian vulnerability— underscores the potential effectiveness of the proposed measures.

The many sanctions bills under congressional consideration acknowledge one critical fact: Russia is still interfering in our democracy and shows no sign of stopping before November. We believe that sanctions targeting Russian sovereign issuance are among the most important and impactful of the proposed measures, and we believe that the spillover concerns voiced by Treasury are over-stated. If Congress does intend to pass another Russia sanctions bill, it should give this provision the careful consideration it deserves as a powerful and containable measure at a time when Russia clearly needs to feel pressure to cease its hostile actions.

Josh Rudolph formerly served at the International Monetary Fund, the National Security Council, the US Treasury, and JP Morgan. Follow him on Twitter @JoshRudes.