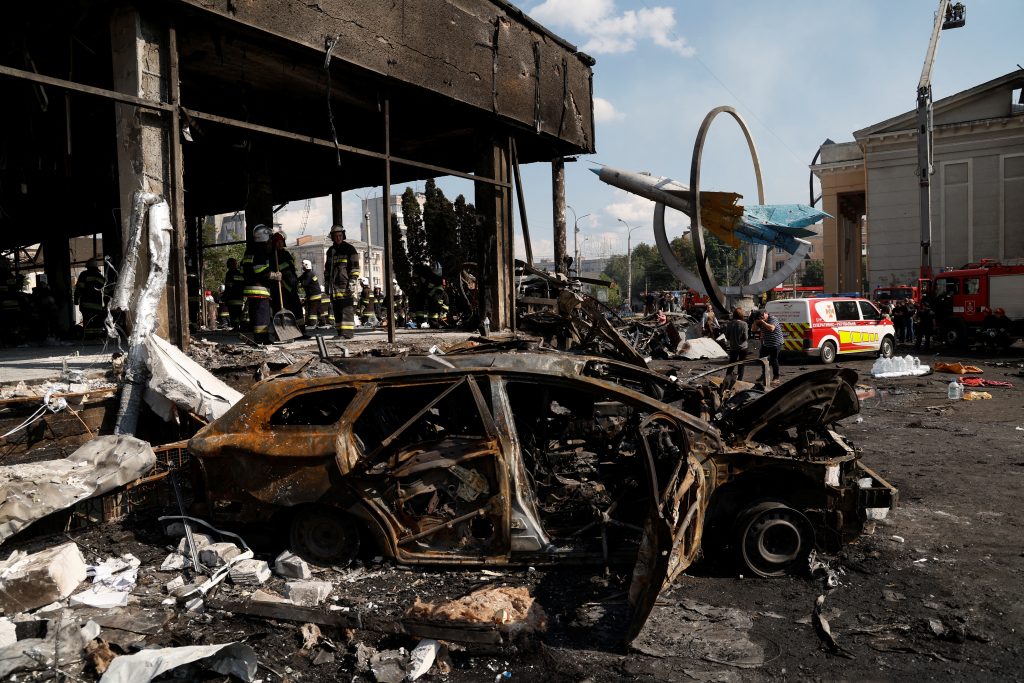 Analyzing Iranian media coverage of the war in Ukraine

On Thursday, July 14, Russia launched an attack in the Ukrainian city of Vinnytsia. The head of Regional Military Administration in Vinnytsia, Serhii Borzov, announced the alert on Telegram, urging the civilians to stay indoors and that four missiles were already taken down by Ukrainian military.

Ihor Klymenko, Chief of the National Police of Ukraine, announced on Facebook that three rockets hit an office building and damaged surrounding residential buildings in the city southwest of Kyiv. Various photos and videos of the damaged caused by the attack started appearing on the same day on social media. The Ukrainian Security Service also shared a video of destroyed civilian buildings in the city.

The DFRLab geolocated one of the areas in the city center hit by the missile attack, close to the House of Officers and a monument honoring the Ukrainian Air Forces of Ukraine.

A high-rise building damaged in the attack contained a medical center that was recently opened, which was also destroyed.

According to media sources, the attack killed 20 people, including three children. At the time of reporting, another 90 civilians had been injured. Ukrainian President Volodymyr Zelenskyy called the Russian attack an act of terrorism on the Ukrainian people. The city of Vinnytsia is roughly 400 kilometers away from the nearest frontlines (Kherson) and does not pose a threat to Russian forces.

Vazhnye Istorii and Media Zona, together with BBC in Russian, independently documented the names of approximately 4,500 Russian soldiers killed in Ukraine through mentions in public sources. This number was then corroborated by novayagazeta.eu, which calculated the total sum of money received by relatives of the deceased. Novayagazeta.eu is the new edition of the Pulitzer prize-winning media outlet Novaya Gazeta, which was forced to cease operations in Russia.

Media Zona and BBC Russia worked with a group of volunteers to document 4,515 deaths of Russian soldiers and officers as of July 8, 2022. Vazhnye Istorii, meanwhile, used a similar method to calculate 4,421 deaths as of July 12. Novayagazeta.eu assessed that “four to seven thousand people” had been officially recognized as dead to qualify for compensation payments to relatives.

As not all deaths of soldiers are publicly announced, the actual death toll is believed to be much higher. Authorities have also attempted to quash documentation of death tolls. On June 6, for example, a court in Kaliningrad region ruled that data about casualties at war or military operation is “state secret” and demanded that regional outlet 60.ru delete its list of deceased soldiers garnered from open sources. At least seven other regional outlets deleted similar lists from their pages to avoid prosecution, according to Roskomsvaboda, an anti-censorship website in Russia.

The most recent death toll officially announced by the Russian Ministry of Defense was 1,351 soldiers as of March 25, 2022. Ukrainian President Volodymyr Zelenskyy told CNN on April 16 that 2,500 – 3,000 Ukrainian soldiers had died during the war by that time. Neither side regularly reports about its own losses during the war, and are widely believed to be undercounts.

On July 13, Sergei  Naryshkin, director of Russia’s Foreign Intelligence Service, alleged that Polish political leaders launched a propaganda campaign to cover up the country’s “expansion” into Western Ukraine. Naryshkin asserted that Poland hoped to seize Ukrainian territory without attracting much attention from Washington or Moscow, and would force all involved parties to accept “Polish expansion as a fait accompli” during eventual peace negotiations. According to Naryshkin, after NATO and the EU found out about Warsaw’s plans, the latter launched a media campaign to disguise its actions and gave instructions to state-controlled think tanks and media outlets to disperse “inappropriate rumors” about Poland’s expansion in Ukraine.

This is not the first time that Naryshkin has made similar claims without providing evidence. In April, 2021, he accused Poland of plotting to reinstate Polish control on Western Ukraine with the help of the United States. Polish ministerial spokesman Stanislaw Zaryn wrote on Twitter that such statements from the Kremlin were an attempt to sow tensions between Poles and Ukrainians.

Analyzing Iranian media coverage of the war in Ukraine

To better understand recent Iranian coverage of the war in Ukraine, the DFRLab analyzed headlines of articles published by Iranian media outlets from July 8 to July 14 using the content analysis tool Event Registry. The AI-powered tool collects articles from approximately 150,000 news sources globally and clusters them into media narratives, or “events.” Most of the Iranian media events associated with the keyword “Ukraine” in Farsi were determined to be neutral. Those articles that were not neutral criticized the US, NATO, Europe, and the West, or covered statements by Kremlin or pro-Kremlin officials. These included:

Russian President Vladimir Putin is visiting Iran on the week of July 18. The visit was announced one day after US National Security Advisor Jake Sullivan said that US intelligence “indicates that the Iranian government is preparing to provide Russia with up to several hundred UAVs [drones], including weapons-capable UAVs, on an expedited timeline.” Iranian Foreign Minister Hossein Amir-Abdollahian would not confirm the sale of drones to Russia. “We have various forms of cooperation with Russia, including in the sphere of defense, but we are not helping either side involved in the [Ukrainian] conflict because we are certain that it should be concluded,” he said. TASS.com, the English version of the Kremlin-controlled outlet, wrote that Amir-Abdollahian “denies selling drones to Russia,” while the Washington Post qualified Amir-Abdollahian’s answer as “vague.”

Image: A view of a damaged building and a car at the site of a Russian military strike, as Russia's attack on Ukraine continues, in Vinnytsia, Ukraine July 14, 2022. REUTERS/Valentyn Ogirenko