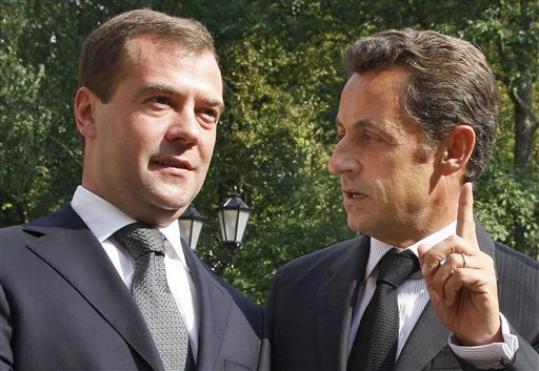 Mark Mardell, the BBC’s resident Euroblogger, is quite pleased with Moscow’s concessions to Nicolas Sarkozy and his EU delegation.  While hedging his bets, he writes, “If this first superficial take is as it appears then Sarkozy has done rather well and those who insisted on both unity and a firmish line at the EU summit a week ago will be patting themselves on the back.”

As a result of Sarkozy’s visit, Russia has agreed to withdraw its forces from Georgia proper.  At the same time, however, President Dmitri Medvedev steadfastly refused to make any concessions with respect to South Ossetia and Abkhazia, declaring, “As for recognition, for us that issue is closed. From the point of view of international law, for us two new states have appeared.”

This is the same man who, less than a month earlier, agreed — also under pressure from Sarkozy — to a six point plan which can be summarized thusly:

1. No recourse to use violence between the protagonists. Sarkozy: This applies to everyone: Ossetians, Abkhazians, Georgia in its entirety and Russians.

2. The cessation of hostilities.

4. The return of Georgian armed forces to their usual quarters.

5. Russian armed forces to withdraw to the positions held before hostilities began in South Ossetia. Russian peacekeepers to implement additional security measures until an international monitoring mechanism is in place. Sarkozy: These measures affect only the immediate vicinity of South Ossetia and in no instance the entire territory of Georgia.

6. The opening of international discussions on the modalities of security and stability of South Ossetia and Abkhazia.

Medvedev has flatly failed to even pretend to carry out his obligations under this plan.  Not only haven’t Russian troops returned to their former positions in South Ossetia and Abkhazia, but they continue to occupy parts of undisputed Georgian territory.  He abrogated point six flatly less than two weeks after agreeing to it by declaring the breakaway provinces to be independent states, fully recognized by Russia.

Granting that there are few good options and that saber rattling hasn’t done much good, either, why is it that the international community should take Medvedev at his word?  As for me, I’ll believe it when I see it.  And maybe not even then.