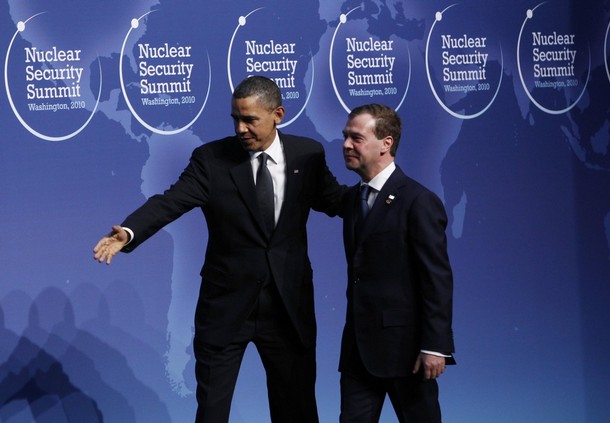 When President Barack Obama welcomes President Dmitry Medvedev to the White House on June 24th, he should ask the Russian president one blunt question: What do you want?

In the last several weeks, I’ve attended several meetings on and heard numerous commentaries about the U.S.-Russia relationship, and one consistent theme has resounded: what are the Kremlin’s goals?

Certainly everyone is aware of what the Russian leadership does not want: further expansion of the North Atlantic alliance to encompass former Soviet republics being the most well-known. But many of the things on the “ask” list of Russian experts are distressingly vague. Russia does not want to be excluded from Europe’s security architecture. It wants a commanding voice at international gatherings. Moscow needs to be “respected.”

My colleague Paul Saunders likes to remark that Russia wants to be an agenda-setter, not just an agenda-taker.

It is understandable that Medvedev and Prime Minister Vladimir Putin are not amenable to a made-in-the-U.S.A. global agenda; what is less clear, however, is the agenda that they would propose in its place. Certainly, Russia has not emerged as a leading voice in the G-20 for proposing new solutions to the problems the world currently faces.

Ten years ago, we had a clearer understanding of Russian interests. The Putin presidency, for the most part, concerned itself with stemming further losses and laying the basis for a modest resurgence in Russia’s capabilities as a great power. Despite being shaken by the financial crisis of 2008-09, those goals have largely been met.

So what’s next? Russians talk about playing a “greater role” in the world; but what are they prepared to commit?

This is the question that is proving difficult to answer. Now that Russia has been restored to the ranks of the great powers, what sort of global order is it seeking to shape? Specifically, does Moscow really want to see the diminution of U.S. power and influence in the world? Russian experts, for instance, loudly complain about the U.S. presence in Central Asia, but would the Kremlin want to take on a greater share of the burden of stabilizing Afghanistan? Is the continued rise of China to the benefit of Russia?

The Russian government, in recent weeks, has moved to a more cooperative stance vis-à-vis Washington. But I do not believe that the essential questions have been definitively resolved. Within the political establishment, there are those who want to again pursue the possibility of a close partnership with the United States; there are those who prefer to concentrate on cementing Russia’s good relations with the European core; and there are those who would commit Russia to “look south and east” and ally with rising powers to fundamentally revise the post-Cold War status quo.

Medvedev appears to have recommitted to a foreign policy vision that was shared with Putin in the first months of his presidency; a qualified partnership with the West and specifically the United States to modify rather than completely overthrow the post-Cold War order. What would this consist of? To read between the tea leaves–closer economic ties, to start; a recognition of Russian “predominance” in the Eurasian space; the ability of Russia to modify U.S. global security plans; Russian-American cooperation without subordination of Moscow’s contributions to U.S. command and leadership.

It would be difficult for Obama to deliver on this agenda, given U.S. interests and the political constraints in which any American presidential administration has to operate, but if this is what the Kremlin believes it wants, it at least provides a basis for discussion.

The reality, however, is that the Kremlin does not always speak with one voice. Advocates of a closer partnership with the United States are balanced against those who, while recognizing the reality of American power, see greater advantages for Russia not becoming too closely entangled with U.S. policy.

Contrary to the popular stereotype, there is no “master plan” guiding Russian foreign policy. There are competing interests and perspectives, uneasily harmonized by the unusual situation of the “diarchy” between the president and the prime minister.

Nikolas K. Gvosdev, a contributing editor at the Atlantic Council, is professor of national security decision making at the U.S. Naval War College. Dr. Gvosdev is a frequent commentator on U.S. foreign policy and international relations, Russian and Eurasian affairs, and developments in the Middle East. Photo credit: Reuters.