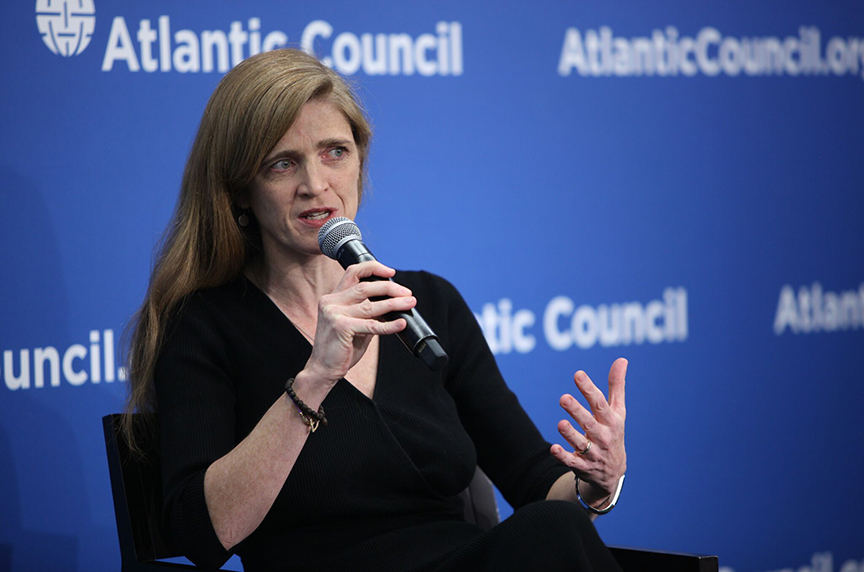 The United States’ Ambassador to the United Nations, Samantha Power, on January 17 described Russia as a “major threat” facing the United States and the rules-based liberal world order, and cautioned Americans against allowing Moscow to divide them in the face of this threat.

“Our values, our security, our prosperity, and our very way of life are tied to this [rules-based] order and we… the United States and our closest partners, must come together to prevent Russia from succeeding in weakening that order,” Power said at the Atlantic Council in her final public remarks as ambassador.

Power called for a renewed commitment to the rules and institutions that have underpinned the liberal world order for the past seven decades, and the development of new tools to counter Russia’s attempts at undermining it. Russia’s attacks have “exposed” and “exacerbated” vulnerabilities within Western democracies, she said, adding, “we cannot let Russia divide us.”

At the same time, Power noted that Russia would not have succeeded in its effort to cast doubt about the integrity of democracy in the United States had many Americans not already felt those doubts. Add to this the fact that a recent poll found an alarming shift in US public opinion: 37 percent of Republicans now hold a favorable view of Putin, up from 10 percent in 2014.

As the United States’ ambassador to the United Nations for the past three-and-a-half years, Power has had a perfect vantage point from which to observe Russia’s deleterious actions. She delivered a comprehensive warning on the Russian threat to the sanctity of democratic institutions in the United States and Europe, and noted Russia’s backing of Bashar al-Assad’s murderous regime in Syria, its annexation of Crimea, and support for separatists in eastern Ukraine.

Power’s comments come days before the inauguration of Donald Trump as the next president of the United States, which will take place on January 20. Trump has a more favorable view of Russia and its president, Vladimir Putin.

High-level engagement between Washington and Moscow is going to be critical, Power said, however, the United States must be clear about its interests and the cost of “allowing history to be erased.”

“We who are leaving this administration root wholeheartedly for a different kind of era, but it can’t be one that glosses the past or papers over the fact that you are talking about dealing with a leader who has his own opponents intimidated and in some cases killed,” she said. “This will never be a symmetrical relationship absent a sea change.”

Amid reports that the Trump administration will look to reset relations with Russia—just as US President Barack Obama’s administration attempted to do in 2009—Power said: “2017 is not 2009.”

In 2009, she said, the United States was able to find common ground with then Russian President Dmitry Medvedev and Russia was not occupying Crimea, fueling a conflict in eastern Ukraine, and bombing hospitals in Syria. “Nor, most importantly, had Russia interfered directly in the US election,” she said.

The Obama administration, backed by the entire intelligence community, has concluded that Russia meddled in the US presidential elections in 2016 with the goal of getting Trump elected. While Russia has been accused of disseminating fake news and conducting cyberattacks on the Democratic National Committee and top Democratic officials—accusations that the Kremlin has denied—the intelligence community has not been able to say definitively that these actions influenced voters.

Power called for a bipartisan effort to determine the full extent of Russia’s actions in the elections and devise ways to prevent more such meddling. The purpose of such an investigation is “not to challenge the outcome of any races in our recent election,” she said, but to “identify the gaps in our defenses that Russia exploited as well as other gaps that may not have seized upon in this attack but that Russia or others could take advantage of in the future.”

She said it would be “deeply naïve and deeply negligent” to think that those who have found vulnerabilities will not seek to undermine them over and over again. “Allowing politics to get in the way of determining the full extent of Russia’s meddling and how best to protect our democracy would undermine our core national security interests,” the ambassador said.

In a thinly veiled swipe at Trump, she observed that it is not healthy for “a party or its leaders to cast doubt on a unanimous, well-documented assessment of our intelligence community that a foreign government is seeking to harm our country.” Trump has been skeptical of Russia’s role in the elections.

In Europe—where leaders face elections in Germany, France, and the Netherlands this year—there are reports of Russian meddling similar to the kind observed in the United States.  Besides seeking to undermine leaders like German Chancellor Angela Merkel with fake news stories, Russia has supported far-right populist political parties such as the National Front in France.

Russia has launched a systematic effort to “sow doubts in democracies and to drive a wedge between the United States and our closest allies,” said Power.

Following her remarks, Power participated in a discussion with the John E. Herbst, director of the Atlantic Council’s Dinu Patriciu Eurasia Center.

Besides a unified bipartisan response, Power called for three other steps that the United States should take to address the Russian threat—inform US citizens about the danger facing their democracy; reassure allies by maintaining robust support for NATO and fellow member states in the Alliance, encourage allies to meet the 2 percent of GDP defense expenditure goal, and maintain sanctions on Russia until it changes its behavior. These measures should be combined with deeper engagement with the Russian people, she said.

Noting the work that must be done to protect the rules-based order, Power said Russia has an edge in one respect: “It turns out it is easier to break institutions down than to build them up. It is easier to sow skepticism than to earn people’s trust. Making up fake news… is a lot easier than reporting the facts required for real news. Put simply, in international affairs in 2017 it is often easier to be bad than good.”

As an example, Power cited Russia’s campaign of denial and deception that followed its bombing of a Red Crescent aid convoy in Syria in September of 2016.

Noting that lying is a strategic asset of Russian government mouthpieces, Power warned against the temptation to step into Russia’s “upside-down land” by trying to beat them at their own game. “We have to fight misinformation with information; fiction with facts,” she said.

A British Parliament report found that the Russian government had spent between $600 million and $1 billion a year on propaganda tools like the television channel RT. The United States needs to be spending much more to counter such propaganda, said Power.

Urging greater engagement with the Russian people, Power noted that they—particularly the families of Russian soldiers killed in Ukraine—are the victims of the propaganda tools that Russia has also used abroad. “We must be very careful to distinguish between the Russian government and the Russian people,” she said.

In a UN Security Council in which the five permanent members—the United States, Russia, China, the United Kingdom, and France—wield veto powers, Power knows full well the advantages of having Washington and Moscow on the same page: chemical weapons are removed from Syria and a historic nuclear deal can be reached with Iran.

“Some of the most rewarding and impactful work I have done at the United Nations has come in the times when my Russian counterpart and I have been able to cooperate,” said Power.

Russia has also worked “constructively” with the Security Council to pick the next secretary-general of the United Nations—António Guterres, she said.

Noting the similarity between many of the challenges facing the United States and Russia—extremism, China’s territorial expansionist aims, and job creation—Power added: “It is very much in our interest to try to solve problems with Russia. Dialogue between us is absolutely imperative.”