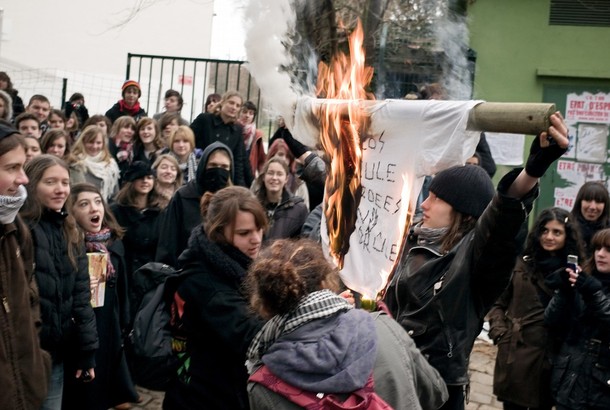 French President Nicolas Sarkozy has postponed controversial Lycee reforms after a week of student demonstrations that many feared could escalate into violence.   AFP:

Weeks of student protests forced Sarkozy’s government to put a plan for high school education reform on ice amid fears that opposition from the streets could spread social unrest like that seen in Greece.

Education Minister Xavier Darcos announced late Monday he was delaying for a year a broad overhaul of the school curriculum, a move seen as the first major retreat from reform since Sarkozy took office in May 2007.

Despite the announcement, students staged protests in dozens of Paris high schools and unions decided to go ahead with scheduled nationwide marches on Tuesday and Thursday to demand the plan be fully scrapped.

Sarkozy’s reform drive also came under attack when a group of MPs of his governing right-wing party refused to back a bill allowing shops to open on Sundays, forcing him to agree to a watered-down version of the legislation.  The new bill to be presented to the National Assembly on Wednesday will double the number of Sunday shopping days from five to 10 per year – on top of the Christmas holiday period.  Sarkozy was forced to make concessions after party members came under intense lobbying from small shopkeepers, who are allowed to do business on Sunday mornings and feared competition from supermarkets.

Protests over education reform turned violent last week, with students clashing with police in Brest, Rennes and Lille, cities in northern France that are also struggling with economic hardship.   Darcos said he had conferred with Sarkozy and that both agreed “this reform project had become a focal point for social movements,” and risked snowballing into a political showdown with the government.  Thousands of high-school students have staged protests over the past weeks against the proposed changes that would have cut the number of classroom hours and created a new semester system, modelled after Finnish high schools.

The Connexion reports that the policy change is itself not without critics.

The last minute u-turn came just days after Darcos said that the protests against his plans were being led by a “small group of malcontents” and vowed that his reforms to the seconde class would go ahead. His actions have led Le Figaro to brand him the “Hesitation Minister.” Le Monde said the move was “as spectacular as it was unexpected”.

Le Monde claims that rising tensions in Greece and a history of student protests turning violent in France may also have been behind the decision.  “This is not a step-down but an observation that the social climate has changed a lot and that young people are very worried,” said a spokesman for the Education Ministry. “We are going to leave more time to put the changes to the seconde in place and look more widely at reforming lycée education as a whole,” a spokesman added.

Still, Sarkozy’s fears were not unreasonable, as Bruce Crumley noted yesterday in a TIME piece entitled, “Could Greece’s Riots Spread to France?”

Even as Greece awakened Monday to relative calm following eight days of rioting by outraged youths, French officials were moving to placate protesting students amid rising fears that violence could break out across France. Given the defiant nature of French student protests over the years — including weeks of violent demonstrations over a new youth labor contract in 2006 — concern is growing in France that the dismal economic outlook could push the current anti-reform protests into the kind of wild insurrection that has rocked Greece.

“What we saw in Greece is not beyond what could happen here in France,” warned former Socialist prime minister Laurent Fabius last Friday of the increasingly raucous student protests that closed about 100 French high schools last week. “When you have the economic depression and social despair we’re facing, all it takes is a spark.”

And, indeed, Greek-style protests have in fact been spreading in limited instances, as reports last week from  AP and The Telegraph make clear.

Still, referendum by threat of riot is a dangerous precedent for democratic governance.  Sarkozy and his party won a majority (53.06% on the second ballot) in the April 2007 elections and ran on a platform of tough reforms of the bloated government bureaucracy.

It’s perfectly legitimate for shopkeepers to lobby to be spared reforms that would hurt their business, even if it’s good for France.  Rent seeking is a fact of modern political life.  Not so subtle threats of violence, on the other hand, are beyond the pale.   Giving in to them, while perhaps prudent in the short term, will do nothing to discourage the tactic from becoming routine.