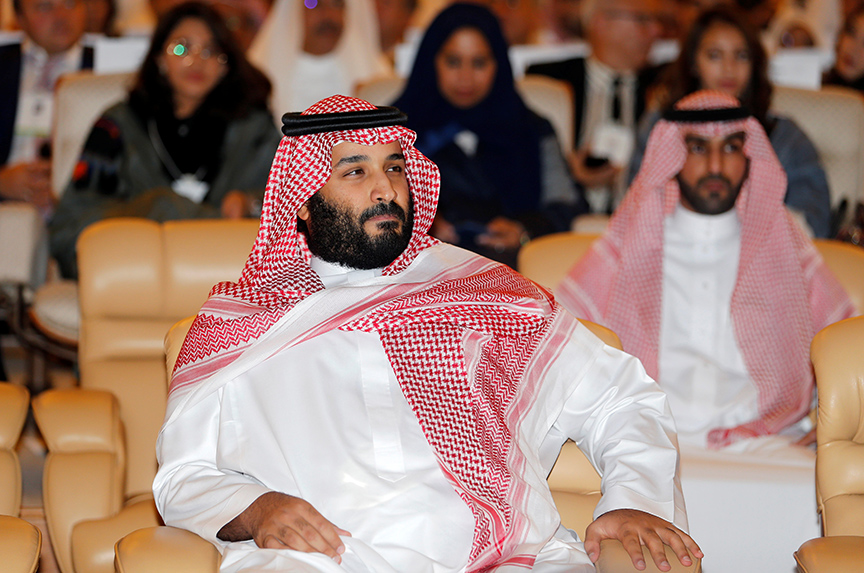 Donald J. Trump and Mohammed bin Salman have a similar outlook when it comes to Iran. Both see the Islamic Republic as a threat that needs to be contained. What then does the elevation of Mohammed bin Salman, commonly known as MBS, to the role of crown prince of Saudi Arabia mean for the Sunni kingdom’s relationship with Shi’ite Iran?

“I do see the likelihood of an American-Iranian confrontation, whether it is in Syria, whether it is on the water in the Gulf, whether it is in Iraq after the campaign in Mosul is concluded,” said Gause. The US administration, including President Trump and Defense Secretary James Mattis, “came into office with a view that Iran was the major issue in the region,” he noted.

In a break from custom, Saudi King Salman, 81, on June 21 announced the elevation of his thirty-one-year-old son, MBS, from the role of deputy crown prince to that of crown prince. The act swept aside MBS’ cousin, fifty-seven-year-old Prince Mohammed bin Nayef, a veteran security chief commonly known as MBN who until earlier this week held the title of crown prince.

Tensions between Saudi Arabia and Iran have steadily escalated over the years. Iran’s Revolutionary Guards accused Saudi Arabia of supporting the Islamic State of Iraq and al-Sham’s (ISIS) attack on Iran’s parliament and the tomb of the Islamic Republic’s founder, Ayatollah Khomenei, on June 7.

On June 5, Saudi Arabia, Bahrain, Egypt, and the United Arab Emirates cut ties with Qatar in part because of Qatar’s support for better relations with Iran.

In Yemen, a Saudi-led coalition is waging a war on Iranian-backed Houthi rebels.

Before isolating Qatar, in January 2016, Saudi Arabia cut off diplomatic ties with Iran after protesters, angry at Saudi Arabia for executing a popular Shi’ite cleric, attacked the Saudi embassy in Tehran.

In a sign that things may only get worse in the Saudi-Iran relationship, MBS, describing Saudi Arabia as “a primary target for the Iranian regime,” said in one recent interview: “We won’t wait for the battle to be in Saudi Arabia. Instead, we’ll work so that the battle is for them in Iran.”

Iran’s state media has responded to MBS’ elevation as crown prince by calling it a “soft coup.”

Karen Elliott House, a senior fellow at Harvard Kennedy School’s Belfer Center for Science and International Affairs, said the timing of MBS’ appointment may have something to do with the fact that the Saudis want to present a united front to confront Iran and capitalize on the fact that Trump shares their point of view on the Islamic Republic. “I do think there is some desire to be considerably more assertive,” she said, adding, “I feel like something is in the works.”

House joined Gause and Ali Tulbah, managing director at McLarty Associates and a former White House liaison to Arab- and Muslim-American communities in the George W. Bush administration, for a conference call hosted by the Atlantic Council on June 22. Barry Pavel,
senior vice president, Arnold Kanter Chair, and director of the Atlantic Council’s Brent Scowcroft Center on International Security, moderated the discussion in which participants took stock of developments in Saudi Arabia.

Describing Saudi concerns about Iran as nothing new, Tulbah said that it is an underappreciated fact that the Trump administration wants to accomplish big change. “One of those things in the Middle East is challenging Iranian provocation beyond its borders… and the table is slowly being set for challenging Iranian malevolence,” Tulbah said. “That’s a message that has been very well received by our Saudi and Emirati friends as well. Part of what you are seeing is increasing alignment in that regard,” he added.

Trump and MBS have a “good deal in common,” said House. “Both are people that weren’t expected to have the kind power they have and both take the view: ‘I was put here to do big things,’ and they both agree that Iran is a big menace. So, you can look for more cooperation that actually seeks to do something about Iran’s growing role because the Iranians are, in my view, undeniably winning the competition with Saudi Arabia right now,” she added.

Gause said US politics have played an enormous role in MBS’ recent fortunes. The two most recent US administrations—led by George W. Bush and Barack Obama—relied on MBN as the point person for counterterrorism and intelligence sharing.

Tulbah said that in the role of minister of defense, MBS has engaged the Trump administration with “messages that give confidence that not only are the prior [counterterrorism] activities going to be continued effectively, but that Saudi Arabia as a country is going to go further now.”

Describing the concentration of power in the hands of one person—MBS—as unprecedented in the kingdom, Gause said: “If you’re going to get change in a conservative place like Saudi Arabia you need to concentrate power, but you don’t have any guarantees that the person who is holding that power, basically unchecked, is going to do the right thing. That is the danger in Saudi Arabia.”

The immediate political danger relates to family politics and how other royals, who held positions of power and expected bigger roles in the future, will feel about the change. Gause has seen no signs of internal rumblings thus far, but suggested that it is worth keeping an eye on how family politics play out.

Tulbah described MBS’ meteoric rise as a “breathtaking act of political maneuvering” over the past two years. “He has done that by advancing a plan, both political and economic, that is full of energy, velocity, forward motion, and that has not only been very attractive to much of the Saudi population… it has also, over the course of time, really been embraced by much of the rest of the [royal] family,” he said.

MBS has championed economic and social reforms marked by the Saudi Vision 2030 plan to transform the Saudi economy and diversify away from oil, and the loosening of restrictions on women. Outside the kingdom, he has led Saudi Arabia into a war in Yemen and has pushed back against Iran.

Gause said he does not expect any big policy changes as a consequence of MBS’ appointment as crown prince simply because “Mohammed bin Salman has been driving the policy bus for the last couple of years anyway.”

He also does not expect a big impact on Saudi Arabia’s relationship with the United States, mainly because MBS has expended a considerable amount of energy into courting the Trump administration, in particular Trump’s son-in-law and top adviser Jared Kushner.

House said MBS’ appointment comes at a time when he “needs a win.”

“He’s stuck in Yemen, he’s losing against Iran, he can’t yet roll Qatar, and [economic] reform is progressing fairly slowly,” she said.

As crown prince, MBS now has more latitude to advance his economic and social reform agendas. “He is free to move as fast as he wants on reform, and I assume he will try harder on that, but that to me is a big interesting question: how serious is he and how serious must he be just given the oil price,” House said.

Noting that economic stability is the real challenge facing Saudi Arabia today, Tulbah said: “By consolidating in the way that King Salman and the crown prince have, the focus is going to be all the more on them to deliver real results to execute in a way that amounts to the benefit of the Saudi people.”

House, who described MBS as a risk-taker, said: “It is beginning to be clear to everyone that you do need economic reform and he’s got the only game in town.”