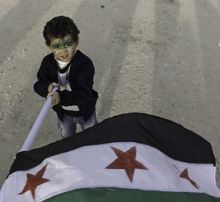 While the United States, Russia, and the other parties interested in the civil war in Syria haggle over the ground rules for admission to a Geneva peace conference, Syrian children are succumbing to polio and other horrible diseases and losing precious years of schooling.

The civil war has destroyed homes, schools, hospitals, sanitation and water systems that once made Syria among the more developed countries in the region. Instead of arguing over who should replace Syrian President Bashar al-Assad – who shows no inclination to resign – those planning a new Geneva conference should focus on establishing local ceasefires to facilitate humanitarian access for aid workers to five million Syrians displaced within the country. More international financial aid is also urgently needed to help the more than 2.2 million Syrian refugees in neighboring countries.

Earlier this week, the World Health Organization confirmed ten cases of polio in the eastern province of Deir al-Zour and there are likely to be many more given how quickly the crippling disease spreads in unsanitary conditions. A ceasefire would allow the UN and other nongovernmental organizations to reach these displaced children and vaccinate them against polio and other ailments. Humanitarian workers could also provide food, warm clothing, and other supplies to help Syrian families get through another bleak winter.

Anne Richard, Assistant Secretary of State for Population, Refugees, and Migration, told an audience at the Woodrow Wilson International Center for Scholars in Washington earlier this week that Syrians are dying from “no access to food, clean water and medical care.” She accused the Assad regime of blocking aid from getting out of Damascus, but noted that opposition groups also man checkpoints that hinder access for relief personnel.

Beyond the physical needs of displaced people, the war is doing irreparable harm to the minds of millions of Syrian children. Richard said that more than half of Syria’s children no longer attend school and warned that the war is creating a “lost generation.”

The problem extends to neighboring countries hosting Syrian refugees. In Lebanon, where Syrian refugees now comprise nearly a third of the population, there are 280,000 Syrians of school age, most of whom have no access to education, according to Ninette Kelley, resident representative in Lebanon of the UN High Commissioner for Refugees. Lebanon is straining to educate its own children, who are only slightly more numerous than refugee youngsters.

Idle youth are vulnerable to child labor, early marriage, and other forms of exploitation and are easy prey for militant groups. Failing to educate the refugees is “a prescription for future hopelessness and attraction to radical ideologies,” said Edward Gabriel, a former US ambassador to Morocco who is now vice chairman of the American Task Force for Lebanon. One has only to think of Palestinians after various Middle East wars and of Afghans after the Soviet invasion to imagine what sorts of terrorists might be spawned by the Syrian war.

The best solution, obviously, would be a political solution to the war but that looks unlikely in the short or even medium term.

The Assad government, while it has lost control over much of Syrian territory and has no legitimacy in the opinion of millions of its citizens, has ironically been strengthened by agreeing to give up its chemical weapons arsenal. “Assad now sees himself as an essential party to a long-term contract,” says Fred Hof, a former State Department official dealing with Syria and a senior fellow at the Atlantic Council.

Assad continues to enjoy the strong backing of Russia and Iran, which may no longer be enamored with the Syrian leader but see no reason to jettison him without a viable alternative.

The splintering Syrian opposition, meanwhile, continues to fail to provide such an alternative. The fiercest fighters are connected to al-Qaida or other extreme Sunni fundamentalist movements that have no appeal to Syria’s religious and ethnic minorities, including Christians, Kurds, Shiites and of course, the ruling Alawites. The Obama administration and other “Friends of the Syrian People” have been struggling to bolster more moderate elements. But the United States has not followed through on pledges to train and arm substantial numbers of rebels, fearing that the weapons might fall into the wrong hands. That cedes the field to Gulf Arab backers who are less choosey about the recipients of lethal aid.

In such circumstances, Hof suggests that it might make sense to “pivot” at a prospective Geneva conference from discussing a transitional government for Syria to improving humanitarian access to Syrian civilians.

At the same time, countries such as Saudi Arabia – which has loudly condemned US zigzags over Syria policy – could provide more assistance to UN agencies struggling to meet the needs of Syrians both inside the country and in neighboring states. Otherwise, the future of the Syrian people will be even more at risk.

Barbara Slavin is a senior fellow at the Atlantic Council and Washington correspondent for Al-Monitor. She tweets @BarbaraSlavin1