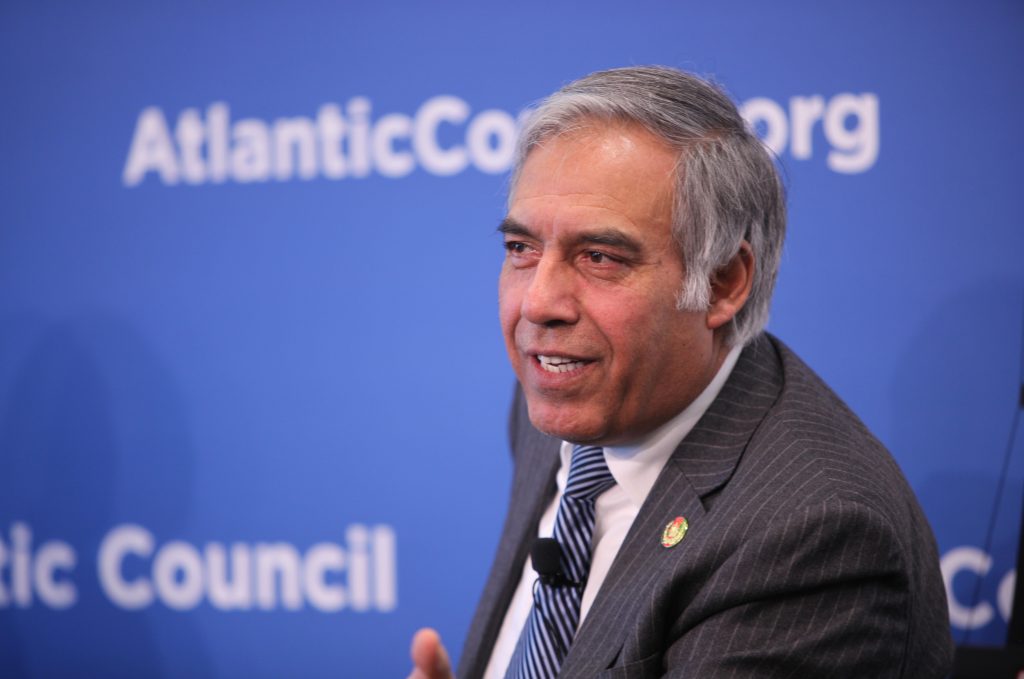 A stable Afghanistan is vital for regional prosperity because gas pipelines, power grids, and road and rail networks can be constructed providing economical and much-needed energy and market access to the neighborhood, a top Afghan official said on January 12.

“Afghanistan’s stability has a tremendous positive impact on the economic vibrancy of Pakistan, and the same is true for Iran and our other neighbors as well,” Mohammad Humayon Qayoumi, chief adviser to Afghan President Ashraf Ghani on infrastructure, human capital, and technology, said in an interview.

Mohammad Humayon Qayoumi spoke with the New Atlanticist’s Ashish Kumar Sen on a visit to Washington. Here are excerpts from our interview.

Q: The success of your government’s efforts at regional connectivity and economic integration depends on the security situation in Afghanistan. What then can be realistically achieved in the current security environment?

Qayoumi: All of the projects [undertaken by the Afghan government] have been vetted and we have looked at them from all aspects. When we look at some of the major utility projects in other parts of the world, many of them are in hostile areas.

It is important for people to realize that security and economic development are two sides of the same coin. I don’t think you can accomplish one without the other. Our approach is not to underestimate the implications of security, but to look at it very realistically.

At the same time, we are trying to determine how we can get the support of the locals, what is motivating people to disrupt progress, and how can we get to the root causes of that insecurity and try to address them.

Q: Is that realization being reflected?

Qayoumi: The TAPI [Turkmenistan-Afghanistan-Pakistan-India gas pipeline] project is a good example. Why on Earth would people invest $10 billion and four countries get involved if they do not feel that it is a realistic project?

If we look at the CASA 1000 electricity project, which is again a partnership of four countries—Kyrgyzstan, Tajikistan, Afghanistan, and Pakistan—why would people invest?

I think these countries are beginning to see that the more stable Afghanistan is the better it is going to be for them. I don’t think that without Afghanistan Pakistan can meet its energy needs in an economical and environmentally sustainable fashion. Yes, they can get power by burning a lot of coal or making higher investments and get the same generation capacity, but they could get it far cheaper and in a much more economically viable fashion from Central Asia via Afghanistan. Afghanistan’s stability has a tremendous positive impact on the economic vibrancy of Pakistan, and the same is true for Iran and our other neighbors as well.

Q: What can the United States do to facilitate connectivity between Afghanistan and its neighbors?

Qayoumi: The United States is a foundational partner for Afghanistan. The credibility that the United States brings to these discussions is tremendously important. It not only helps facilitate, but in many cases it is quite essential to have to be able to move forward.

Q: The World Bank estimates that Afghanistan has water resources that could potentially generate up to 24,000 megawatts of electricity. What is the Ghani government doing to harness these opportunities in the power sector?

Qayoumi: We are looking at Afghanistan’s river systems and seeing how we can utilize these to benefit Afghanistan as well to export electricity.

We are in the early stages of looking at the Kabul-Kunar river basin where electricity generation could not only help Afghanistan, but a significant portion could be sent to meet Pakistan’s needs. This is an area where Afghanistan sees tremendous opportunities. It is a way to build stronger interrelationships and interdependencies between our neighbors and Afghanistan.

Q: The TAPI gas pipeline project was finally inaugurated in Turkmenistan in December. What does TAPI mean for Afghanistan and the region?

Qayoumi: What it means for Afghanistan is that the country is open for business and that others are investing in bidding on the long-term safety and security of Afghanistan. It also shows that four countries—Turkmenistan, Afghanistan, Pakistan, and India—can work together on a project that will take roughly four to five years to build and thirty-plus years to operate. The goodwill that could come out of the success of this project could mean other projects will get started. TAPI is expected to be completed by 2019.

Q: What is the status of the Central Asia South Asia Electricity Transmission and Trade (CASA-1000) Project?

Qayoumi: CASA 1000 is in the last stages. Most of the agreements have already been finalized. There is only one small glitch that is being worked out right now with the World Bank.

Q: What opportunities will the expected lifting of sanctions on Iran as a consequence of the nuclear deal open up for Afghanistan?

Qayoumi: We see a lot of opportunities, especially as we talk about the movement of goods from China to Iran through Afghanistan, the IT connections between China and Iran through fiber optic networks, and connections between Central Asian countries through Gwadar [port in Pakistan] as well as Chabahar [port in Iran]. These are all definite opportunities.

Q: What are your thoughts on China’s new role in the effort to facilitate a roadmap for peace with the Taliban? Can this effort, dovetailing as it does with China’s economic interests in the region, be a game changer?

Qayoumi: We are very optimistic about the four-way talks that have started [with Pakistan, Afghanistan, China, and the United States]. We will monitor it closely as it moves forward.

(This interview has been edited for clarity.)

Image: “It is important for people to realize that security and economic development are two sides of the same coin,” said Mohammad Humayon Qayoumi, chief adviser to Afghan President Ashraf Ghani on infrastructure, human capital, and technology. “I don’t think you can accomplish one without the other.” (Atlantic Council/Victoria Langton)