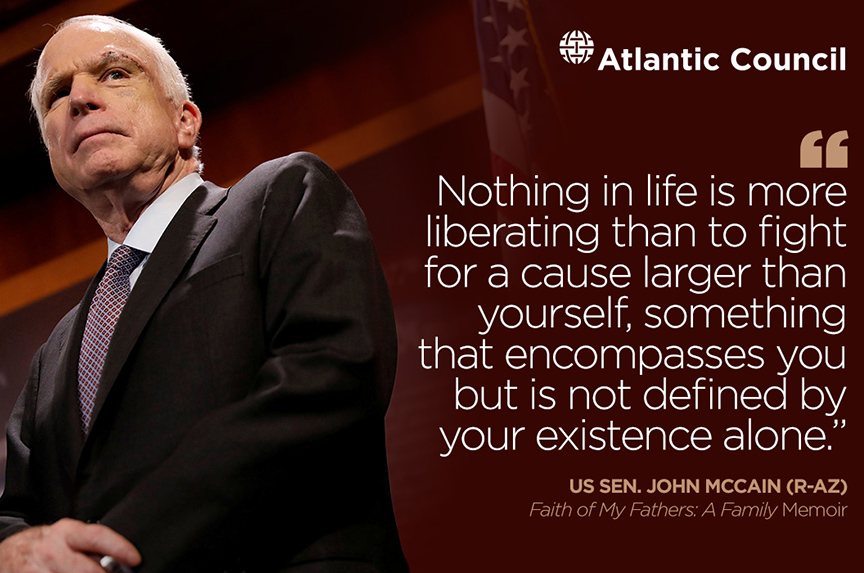 The Atlantic Council remembers US Sen. John McCain who received the Council’s Freedom Award in 2011. Here is a transcript of his remarks at the award ceremony.

“Thank you, Mr. President for your generous and gracious introduction.  To hear such warm and undeserved words of praise from a man I respect as much as you is a humbling honor indeed.  Thank you, sir.

“I also want to pay tribute to my fellow honorees here tonight for the contribution they have made to the success of freedom – from here in Poland, to neighboring Belarus, to farther away in Egypt.  These champions of liberty are the defenders, supporters, and authors of peaceful democratic revolutions – both those that have been successfully made and those, as in Belarus, that have yet to come, but surely will.  It is a high privilege to share this special night with such inspiring men and women as these.

“We all owe a debt of gratitude to the Atlantic Council for this honor and for convening this important conference, and I want to thank Fred Kempe and his colleagues for organizing this beautiful event.  Over the past few years, the Atlantic Council has transformed itself into one of the leading voices on Euro-Atlantic and global policy issues, and I am a constant beneficiary of its wisdom.

“Perhaps the clearest expression of that wisdom was the decision to present these awards and hold this Global Forum here in the beautiful and historic city of Wroclaw.  I want to thank the mayor, whom I met with earlier, and all of his fellow citizens, for their warm hospitality.  This amazing city has witnessed and absorbed the full spectrum of Europe’s triumphs and tragedies over many millennia, and it has emerged today as an independent center of culture and commerce at the heart of Europe.  And that is the nature of this great country.

“One of the deepest pleasures of my professional life has been watching the progress of the Polish people – from noble resistance, to national liberation, to democratic triumph.  In just one generation, Poland has transformed itself from a captive state of an evil empire to a democratic driver of continental unity – from an object of the struggle for a Europe whole, free, and at peace to an architect of that dream’s expansion on behalf of others.  From the fight to get Poland its rightful place in the NATO alliance, to the on-going struggle for its long-overdue inclusion in the U.S. visa waiver program, I have always been, and will always be, a proud champion of Poland and its people.  I will never tire in that quest.

“Poland embodies the very idea that animates our broader transatlantic community – the idea that Euro-Atlantic democracies, the stewards of Enlightenment principles, need not and should not tackle our challenges in isolation, the idea, in short, that our individual struggles for liberty are really a shared endeavor, imbued with greater meaning.

“There is a word for this: solidarity.  And it unites freedom-loving people, always and everywhere, in the peaceful struggle for justice.  Today that struggle is unfolding in places like Georgia and Ukraine, Moldova and Belarus, and most vividly of all, across the Middle East and North Africa.  The question for us now is the same as it was when Lech Walesa climbed that fence at Gdansk: what side of history will we, the great democracies, be on?

“There is always the temptation to see in the dreams of others for democracy all of the particular reasons why their struggles are different from ours – to concentrate on the many features of culture, or history, or religion that set us apart from these people’s aspirations.  But if I leave you with only one thought tonight, my friends, let it be this: It is our obligation, as free peoples, to look beyond these divisions, to disregard all of the arguments that council passivity in the fight for human dignity, and to reaffirm that core idea that still unites us all, and summons us all, to still nobler endeavors: solidarity – solidarity with the universal longings of the human soul, for basic rights and equality, for liberty under the law, for tolerance and opportunity.

“Like the workers of Gdansk or the youth of East Berlin, young people across the Middle East and North Africa, and in many other places too, are peacefully demonstrating to change the character of their countries – demonstrations that are defined not by violent extremism but by peaceful dissent, not by a hateful ideology of violence but by the indivisible longing for human rights and democracy.  And as such, they are expanding the limitations of what many once thought possible in these societies.  They are forging a new reality in the region, where power and freedom align – and this would be the profoundest repudiation imaginable to the last awful remnants of totalitarianism in our world: the ideology of Al-Qaeda and its terrorist allies.

“Thank you again for this great honor. I will cherish it forever, just as my fellow Americans and I cherish our nation’s warm and enduring friendship with the people of Poland.”

The video of the full award presentation to Senator McCain can be viewed here.