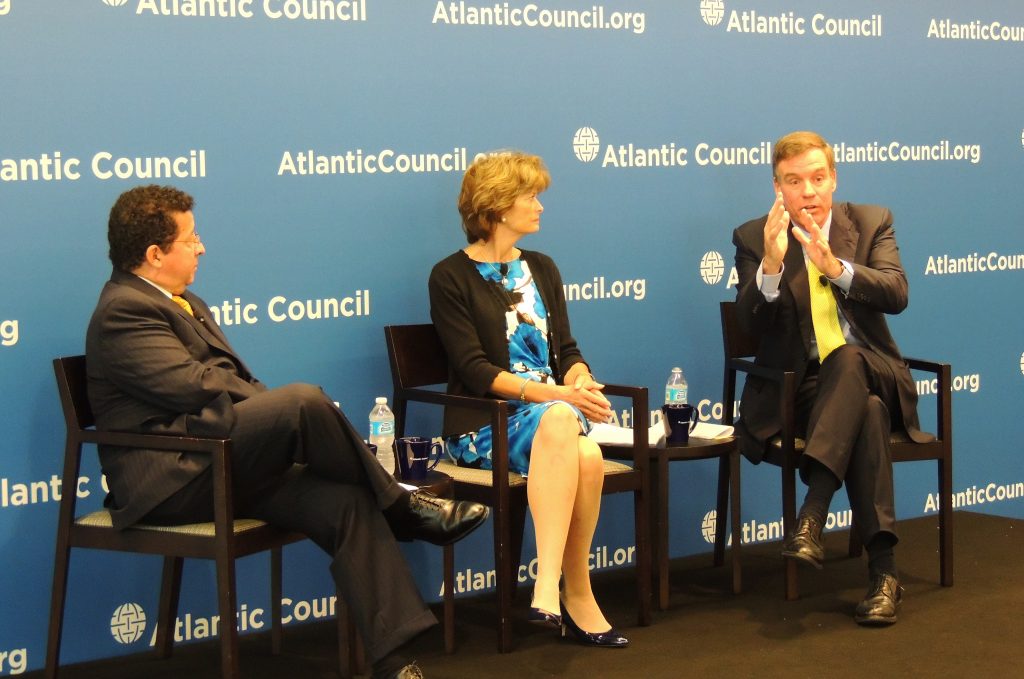 A top Republican Senator, making the case that energy must be a significant tool in the US diplomatic toolkit, said July 30 that the United States will be “effectively sanctioning” domestic oil producers if it does not lift its ban on the export of US crude oil but lifts sanctions on Iran as a result of a nuclear deal with the Islamic Republic.

“We let Iran go out and enjoy the benefits of a global marketplace out there and gain full advantage to their treasury while we sanction our own US oil producers,” said Sen. Lisa Murkowski (R-Alaska), Chairman of the Senate Energy and Natural Resources Committee.

Murkowski spoke at the launch of an Atlantic Council task force report, “Empowering America: How Energy Abundance Can Strengthen US Global Leadership.” Sen. Mark Warner (D-Virginia), who with Murkowski co-chairs the task force, also participated in the discussion.

The Atlantic Council report offers a “detailed assessment of the value of American energy resources as a strategic asset in the US foreign policy toolkit,” said Richard L. Morningstar, founding Director of the Atlantic Council’s Global Energy Center.

“It is crystal clear to us that, if properly utilized, America’s energy abundance…  will be an invaluable tool that strengthens American leadership, advances international security, and promotes global prosperity,” he added.

The report’s recommendations include calling on US policymakers to repeal the ban on exporting US crude oil, easing the licensing process for LNG exports, and investing in research and development of alternative technologies.

The policies advocated for in the report “are not incompatible with the US’ responsibility to continue to lead in the global effort to combat climate change and to create a cleaner environment through sustainable energy solutions,” said Morningstar.

“The notion of increasing America’s energy output and at the same time not stepping back from our commitment to take on the very real threat of climate change are in no ways contradictory,” he said.

The US oil export ban, which has been in place since the energy crisis of the 1970s, was intended to keep domestic gas prices low and ensure national security.

The House of Representatives and Senate are working on bills that aim to lift the ban.

Opponents of this effort say that if the ban is lifted refining jobs will move out of the United States causing domestic gas prices to go up. Supporters argue that an influx of American oil into the global market will reduce international prices.

House Speaker John Boehner (R-Ohio), who had been on the sidelines of the debate, urged Congress July 29 to lift the ban.

The Senate Energy and Natural Resources Committee was expected to vote July 30 on Murkowski’s bill to lift the ban while opening more areas to offshore drilling.

Murkowski described the measure, which she cosponsored with Committee Co-Chair Sen. Maria Cantwell (D-Washington),as a “compromise” and hoped that the effort would not be stopped in its tracks by a presidential veto.

“I am sure that if the administration looked long and hard enough through this bill that we have put together that they could find one piece that they don’t like. I could find lots of pieces that I don’t like,” she said.

“But how productive is that? Don’t stop us before we get started. … Allow us to legislate. Allow us to govern,” she added.

Warner contended that the “stars may be partially aligning” in the energy debate.

“Both sides have to be willing to compromise a little bit,” he said.

“Anybody that tries to pick a piece of this bill early on and say ‘Let me find a way to be against this,’ I don’t think that makes good sense,” he said while urging everyone to “keep an open mind.”

Murkowski and Warner said countries in Asia and Europe could benefit from access to US energy.

Poland, meanwhile, gets most of its oil from Russia, Murkowski noted.

“We work with Poland on a lot of other things… and yet they have to go to Russia for their oil. Don’t you think that they would like a little bit of help from their friends in the United States?” she added.

Warner, who is Co-Chairman of the US-India Caucus in the Senate, said the availability of energy is key to Indian Prime Minister Narendra Modi’s plans for India.

“There [are] enormous opportunities” in India, he said.

Energy as a diplomatic tool

As a consequence of sequestration-related budget cuts, the United States has steadily cut back its military force strength around the world, including Alaska-based troops from an Arctic airborne unit, said Murkowski.

“We recognize that we will never have enough boots on the ground… so what other tools do we have?” she said, adding that energy needs to be a significant tool in the diplomatic toolkit.

Warner said the United States has not been able to effectively use energy as diplomatic tool because of the constraints on energy supply and usage.

A decade ago hardly anyone could have predicted the current energy boom in the United States, Warner said.

“This really has been a game shifter… and starting to move federal policy to catch up with these resources is terribly important,” he added.

Ashish Kumar Sen is a staff writer at the Atlantic Counci