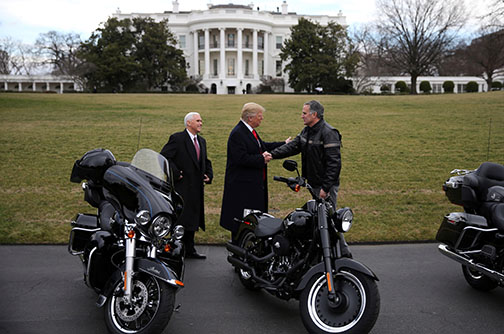 What do bourbon, Levi’s jeans, Harley-Davidson motorcycles, peanut butter, cranberries, and orange juice have in common? The European Union (EU) has threatened to impose retaliatory duties on all of these US products if US President Donald J. Trump goes ahead with his controversial plan to impose tariffs on steel and aluminum imports.

Trump’s tariffs: In unscripted remarks that caught even his closest advisers off guard, Trump announced last week that he intends to impose tariffs of 25 percent on steel and 10 percent on aluminum imports.

That proposal was criticized across the world and even by members of Trump’s own Republican Party. Nevertheless, Trump has dug in and, in the process, lost his top economic adviser, Gary Cohn. On March 6, Cohn announced his intention to resign.

How does the EU feel about all this? To find out, we turned to David O’Sullivan, the EU’s ambassador to the United States. Here’s what he had to say:

Q: What’s at stake in the event that Trump’s proposed tariffs on steel and aluminum do actually go into place?

We have said that we reserve our right to impose rebalancing additional tariffs on the United States’ exports of other products if this is done, because we think that this is not compatible with WTO [World Trade Organization] rules.

But more generally, I think unfortunately it sends a message of unilateral trade measures not always justified by the objective’s economic criteria, which I think is extremely unhelpful. More importantly, perhaps, it pits the United States and the EU in a disagreement over these issues when, in fact, we are in agreement that there is a problem on the global steel market created by Chinese overcapacity. We believe that that is what we should be working together to address.

Q: What options does the EU have to respond if Trump goes ahead with the tariffs?

O’Sullivan: The option is very simple. We don’t consider that this is a national security measure. We think it is very clear from everything that has been said that this is a measure of economic protectionism which is covered by the WTO safeguard rules. We think that this is a disguised safeguard measure and we don’t think the conditions for a safeguard measure are met. Under those [WTO] rules we are entitled to impose rebalancing tariffs on an equivalent amount of US trade, which is what we will do if this measure is finally decided and put into force.

Q: Is the EU serious about its response?

O’Sullivan: We have said very clearly to US authorities for some time that if the United States were to act in a way which is not compatible with international obligations that we would use those rules to defend ourselves and to protect our industry.

But this is not at all where we want to be. We think that we should be working together to address the root cause of this, which is Chinese overcapacity.

Q: Is a trade war inevitable?

O’Sullivan: I hope not. It is certainly not Europe’s wish that we see this turn into a trade war. If the measures are adopted and if we rebalance with tariffs on equivalent products then, of course, we will be in a trade dispute. We have had these kinds of disputes before. We have actually had disputes on steel in 2001-2002. It is our sincere wish that even if this were to go ahead that we can contain this as a specific area of disagreement.

We will always act to defend Europe’s economic interests if this is threatened by unilateral action by any of our trading partners.

Q: In your meetings in Washington, including with House Speaker Paul Ryan, is there an awareness of the damage tariffs could do to the international system of rule of law?

O’Sullivan: I think there is. You can see by much of the public comments by lawmakers and industry that there is a very lively debate in the United States about this issue and there is quite a lot of opposition to the proposed idea of tariffs of this kind being imposed in this way.

We hope that this debate will contribute to the final decision not going in the direction that has been presently indicated.

Q: There is a concern that Chinese steel originally destined for the United States will be sent to Europe in the event of US tariffs. What steps is the EU taking to prevent the dumping of cheap steel from China on the Continent?

O’Sullivan: We will monitor very carefully if there is a deflection of trade away from the United States toward Europe in a way that is not compatible with our trade rules. We have all the tools needed at our disposal, whether anti-dumping measures or other measures, in order to protect our market from being unfairly targeted as a result of these measures. That is an additional element on which we will be particularly vigilant.

Ashish Kumar Sen is deputy director of communications (editorial) at the Atlantic Council. Follow him on Twitter @AshishSen.

Image: US President Donald J. Trump shook hands with Matthew S. Levatich, chief executive officer of Harley-Davidson, at the White House in Washington on February 2, 2017. US Vice President Mike Pence is on the left. The European Union has said it could impose import duties on a number of US products, including Harley-Davidson motorcycles, if the Trump administration goes ahead with its plan to slap tariffs on steel and aluminum imports. (Reuters/Carlos Barria)