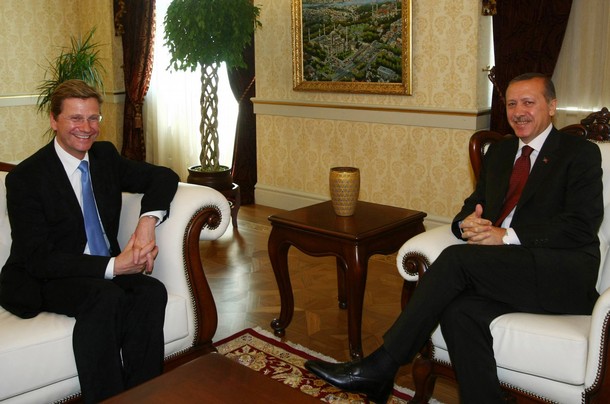 During his recent visit to Ankara, British Prime Minister David Cameron made his stance on Turkish accession to the European Union plain and clear. “I will remain your strongest possible advocate for EU membership,” he said. “Together I want us to pave the road from Ankara to Brussels.” The Belgian government also supports such a position, and has pledged to work with Turkey to make its accession a reality.

In praising Turkey’s participation in NATO (though conveniently overlooking its blocking of NATO-EU cooperation on security issues), Cameron further declared, “It’s just wrong to say Turkey can guard the camp but not be allowed to sit inside the tent.”

As Quentin Peel, associate editor of Financial Times, observes, “It was familiar British policy, but spelt out with unusual passion, and very few cautionary words.” The Turkish media also picked up on Cameron’s praise, with the Sabah daily displaying “The EU would be poor without Turkey” as its front page headline.

Guido Westerwelle, Germany’s foreign minister, is also a strong supporter of Turkey’s EU membership, but got into trouble with domestic leaders in Berlin last January after he “gave his word” as foreign minister that Germany would not actively block Turkish accession. “I want to encourage you [Turkey] to carry on,” he said, though not everyone in the German government agrees with him. Chancellor Angela Merkel has made comments favoring a “privileged partnership” status for Turkey, as opposed to full membership.

Negotiations with Turkey on accession would remain fair and open, Westerwelle insisted on his recent visit, but the outcome of such talks might not result in full membership. He mentioned Germany’s great interest in having “such a strategically important partner…orientated on Europe.” But in interviews before he left Berlin he talked of Turkey being “not ready” for membership, and of the EU being equally unprepared for Turkey. Not surprisingly, these comments received less attention in the Turkish media than Cameron’s did.

According to Peel, “in terms of realistic European politics, Westerwelle was closer to the mark than Cameron. He hammered home the message that Turkey still has much to do in terms of judicial reform and guaranteeing minority rights to qualify for EU membership. It is not a comfortable message, but it is necessary.”

Cameron’s statements were certainly bold, but his “desire to please his hosts” may result in the setting of dangerous and unrealistic expectations. UK journalist Geoffrey Wheatcroft goes so far as to say when “when Cameron, like Tony Blair before him, trumpets the Turkish cause, it only confirms Continental suspicions that London is acting on behalf of Washington.” Merkel and Nicolas Sarkozy, Wheatcroft notes, are both “openly skeptical” about Turkey joining the EU.

Peel concludes, “Both Cameron and Westerwelle are right that Turkey should be encouraged to join the EU. It would be of great strategic benefit to both. That does not mean it can be done. Europe’s politicians are going to have to do a huge sales job to persuade their own public opinion that it is a good idea. Making nice noises in Ankara won’t help. The real test will be with voters at home.”