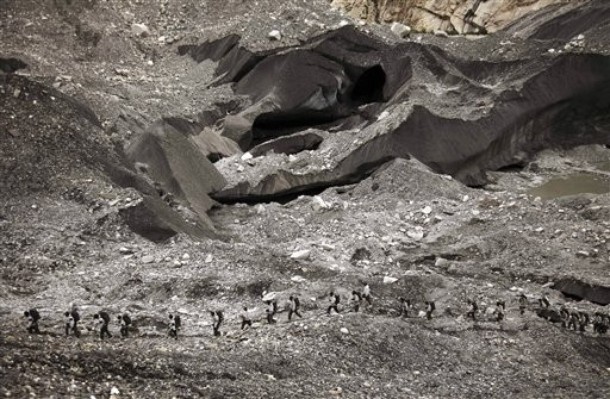 It was in April twenty-eight years ago that the seeds of the Siachen conflict were sown. This April nature struck a cruel blow when an avalanche hit the area, burying 139 Pakistani soldiers and civilian workers. The tragedy is a poignant reminder of the need to settle a long-standing, costly dispute.


Because facts have been sparse in recent TV discussions of Siachen it would be useful to recall the dispute’s military, political and diplomatic history. One way to do this is to ask ten key questions even if they are not exhaustive.

1. What is the source of the dispute?

Agreements between Pakistan and India that followed the wars of 1948 and 1971 did not demarcate or determine a dividing line in Kashmir’s northeastern reaches – one of the world’s most inhospitable and desolate regions. The July 1949 Karachi agreement established a ceasefire line, which after minor modification became the Line of Control under the 1972 Simla Agreement. This went as far as a point known by its grid reference NJ9842, south of the Siachen Glacier. From here on, the agreement said, the line continues “thence north to the glacier”. The area beyond NJ9842 was not delineated because it was deemed too harsh and inaccessible for habitation. Neither side at that time thought the region had any military or strategic importance. It was not anticipated that the glacier would later become a contentious issue and that modern mountain warfare or shifting strategic calculations would make it disputed.

In the mid 1970s Pakistan began to allow international mountaineers and expedition teams to visit the glacier’s peaks. Pakistan ’s administrative control of the area also received cartographic backing. International map publishers started showing the Line of Control proceeding north-eastward towards the Karakorum Pass and the Siachen area in Pakistani territory. Because of the treacherous terrain Pakistan established no permanent posts. Only scouting missions periodically went there.

How did the conflict start?

With India occupying key peaks in April 1984 in a major airborne operation named ‘Meghdoot’. A failure of intelligence meant that Pakistan discovered this and dispatched troops only to find Indian forces occupying almost all the high ground positions along the Saltoro range. Pakistan ’s efforts to dislodge the Indians did not succeed. Both sides gradually came to deploy more soldiers and create more posts.

2. When did diplomatic efforts start to resolve the conflict?

Soon after the first clashes. But it wasn’t until the December 1985 meeting in Delhi between General Ziaul Haq and Prime Minister Rajiv Gandhi that a serious effort was made to pursue a settlement. Since then twelve rounds of talks have taken place, the last in May 2011.

3. Was agreement for military disengagement ever reached?

Yes, in the fifth round held in June 1989 after the advent of Benazir Bhutto’s government and an upswing in relations with India . The joint statement issued after talks on June 17, 1989 outlined the core elements of a settlement: “There was agreement by both sides to work towards a comprehensive settlement, based on redeployment of forces to reduce the chance of conflict, avoidance of the use of force and the determination of future positions on the ground so as to conform with the Simla Agreement and to ensure durable peace in the Siachen area”. It added: “the army authorities of both sides will determine these positions”.

4. How significant was the June 1989 breakthrough?

It produced the outlines of a solution. For the first time the Indians agreed to relocate forces away from the disputed heights although in subsequent talks between military officials in 1989 differences emerged over where they would pull back. The language ‘redeployment of forces’ rather than ‘withdrawal’ was a Pakistani concession aimed at enabling Rajiv Gandhi to sell the agreement to his military and to political opponents in an election year. The agreement was endorsed by Prime Ministers Bhutto and Gandhi during the latter’s July 1989 visit to Islamabad .

5. Was Pakistan keen to turn this understanding into an agreement?

Absolutely. Pakistan ’s defence secretary was mandated for the sixth round of talks in November 1992 to discuss modalities for implementation of the 1989 agreement.

6. What prevented an accord?

Indian backtracking on the 1989 understanding and subsequently changing the terms for a settlement largely on the urging of its military, which continues to oppose a pullout. The 1992 talks ended in deadlock when Delhi insisted on ‘complete’ authentication of ‘current’ positions prior to redeployment and sought to reopen previously settled issues. Pakistan saw this as resiling from the 1989 agreement that obliged both sides to stand down to pre-1972 positions. Pakistan held that India violated the Simla agreement by occupying an area that may have been undemarcated, but was under Pakistan ’s administrative control. The Simla Agreement prohibited unilateral alteration of the status quo whatever the differing legal interpretations.

7. Has ‘authentication’ been the main sticking point?

Yes. The 1989 joint statement made no mention of marking ‘current positions’, referring only to determining ‘future positions.’ Pakistan rejected authentication because a) it meant legitimising an illegal act and b) provided India the basis for a legal claim in negotiations later to delineate the area beyond NJ 9842.

India’s demand for authentication of an Agreed Ground Position Line (AGPL) on the map and on the ground rested on the argument that this would provide a legal or diplomatic safeguard if Pakistan later went back on commitments and captured the Saltoro ridge. Other than being a vehicle to formalise ‘current positions’, authentication has, over the years, served as an alibi for the Indian army to resist military disengagement. Former Indian officials have argued that withdrawal from Siachen will facilitate Pakistan ’s access across Saltoro to the Karakoram Pass on the Chinese border. In what reflects the defence establishment’s thinking, they have also presented a strategic rationale for the LOC’s delineation beyond NJ9842 that provides India both a key location on the Chinese border and permanent control of heights overlooking Gilgit and Baltistan.

8. Were there other missed opportunities in the 1990s?

Possibly. In the November 1992 talks Pakistan showed readiness to record ‘present’ positions on an annexure to the agreement provided the main text contained the proviso that this would not constitute the basis for a legal claim or justify any political or moral right to the area. But the Indians insisted on ‘complete’ authentication and exchange of maps. Pakistan refused. Thereafter the January 1994 talks explored ideas about a Zone of Complete Disengagement based on an Indian non-paper. Delhi continued to press for acceptance of the AGPL before demilitarisation. The dialogue began to run out of steam. The mid 1990s saw BJP leaders calling to retain Siachen for ‘strategic and security reasons’ while Pakistan started to link Siachen to resolving Kashmir .

9. Did the 1999 Kargil episode have implications for talks on Siachen?

Inescapably. Any escalation of tensions or confrontation inevitably sets back diplomatic efforts, but Kargil did more. It gave Delhi an added how-can-we-trust-Pakistan justification to toughen terms for a Siachen settlement and put Islamabad in the dock for violating the Simla accord. It helped the Indian army argue that disengagement would risk Pakistan seizing the posts it vacated.

No. Pakistani officials detected a hardening in the Indian position. Delhi insisted that the line beyond NJ 9842 be delineated before any disengagement or withdrawal. This reversed the sequence proposed by Pakistan and earlier agreed by India : disengagement and moving outside the zone of conflict followed by talks on demarcation. A package proposal was conveyed in a Pakistani non-paper handed during the twelfth round. This reiterated redeployment and joint monitoring of the disengagement process. It also reiterated that once withdrawal schedules were prepared, ‘present’ and ‘future’ positions could be incorporated, subject to the earlier proviso. The talks ended in an impasse.

This unedifying diplomatic history should not however dampen efforts for a settlement but instead intensify the search for imaginative ways to untie the Siachen knot. Not only will this end a confrontation that exacts such a high price but it will also set a powerful precedent to solve other more vexed disputes.

Dr. Maleeha Lodhi is a former Pakistani Ambassador to the United States and special adviser to the Jang Group/GEO. This article originally appeared in The News International.