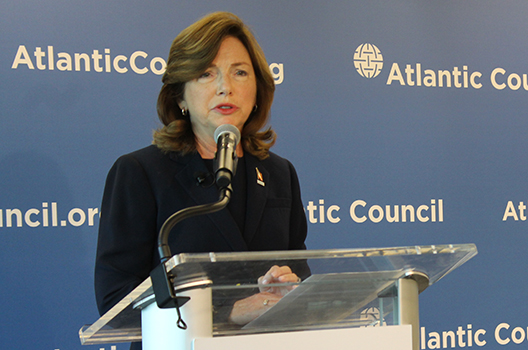 ‘People want clean energy, that is a major driver for us,’ says Barbara Humpton

As the pace of technological change continues to quicken, Barbara Humpton, chief executive officer of Siemens USA, believes that companies and manufactures “have to challenge ourselves to use these tools to positively impact people and society.”

Speaking at an event hosted by the Atlantic Council’s Global Energy Center on December 13, Humpton outlined how her company is working to address the “key megatrends” which will impact the world throughout the 21st century, including climate change, rapid urbanization and demographic change, and the need for resilient societies and infrastructure.

As the threat of climate change dominates headlines and political debates around the world, Humpton said manufactures and energy providers have every incentive to help be part of the solution because “people want clean energy, that is a major driver for us.” Humpton believes Siemens USA—which focuses on electrification, automation, and digitalization—is uniquely situated to help provide transition solutions for governments, businesses, and citizens to wean themselves off fossil fuels and make their energy consumption and production more efficient.

Consumers, according to Humpton, can now take advantage of “dramatic cost reductions in renewable energy,” while energy producers can “supply and help build infrastructure for developing economies to gain access to affordable and clean power.” New technologies can “enable intermittent forms of renewable energy to perform well on a power grid,” allow for “the advent of storage capabilities,” and produce “clean power to provide baseload support [for solar and wind production] when the sun isn’t shining, and wind isn’t blowing.”

Humpton dismissed pessimism over the speed of change in energy consumption, highlighting the new possibility for “stakeholders to put en suite power generation at their own locations—separate from the grid—[or] manage a microgrid or nanogrid. [They] don’t need to buy that power off the transition and distribution system. This is changing everything. The economics are really driving a lot of those decisions and the market is changing even faster than folks predicted even five or ten years ago.”

Former US Deputy Undersecretary of Defense and Atlantic Council Board Director Sherri Goodman, who moderated the event, pointed out that Siemens recently made a commitment to be carbon-neutral by 2030. While Humpton conceded that this promise would be “the toughest job around the world,” she maintained that this was a vital corporate commitment from Siemens and that the company was willing to pay short-term costs for the long-term gain from the move.

The need to address climate change and the growing threat of cyberspace also requires businesses to think about how to build more resilient infrastructure and societies, Humpton said. Rather than just responding to crises once they happen, Humpton said Siemens is “going to be a big proponent of rebuilding for resilience.” Humpton reported that Siemens has been working in Puerto Rico to help re-establish a new electric grid that will not only restore service to the island, but ensure that the grid is better prepared for storms in the future.

Siemens also has its eyes on the demographic changes of the next thirty years. Humpton pointed out the rapid rise of cities as a profound change that business will need to adapt to. “We need to be driven by the objectives of cities and their residents,” she said. “They want to have a clean environment for their citizens. . . and the one big factor that is going to tip the scales for clean power is the advent of electric transportation.”

In addition to the growing importance of cities, lengthening life spans and population growth will have key implications for the workplace of the future. Humpton maintained that despite growing automation of certain work duties, humans will remain critical to manufacturing and development. “The goal of artificial intelligence is to augment what humans are capable of,” she said. “It is not about replacing us. It is about expanding what is possible.” While machines can take some of the manual labor out of the production process it “takes the human in the loop to truly develop the solutions that we are going to need for the future.”

Siemens is also pioneering the application of an apprenticeship model in the United States, Humpton reported, to help give young people and existing workers the technical skills required for future work in a rapidly changing technology environment. Humpton was quick to point out, however, that it is not just young workers who will need to be better adapted to the future of work, especially as workers begin to work later and later into life. Humpton explained that Siemens believes there is “real power in creating multigenerational teams,” rather than solely subsisting on young workers.

For Humpton, the key to the future lies in the innovation and creativity of the humans who work and create products to better our societies. “Our technology matters,” she said, and will be vital in addressing the growing challenges of the 21st century.