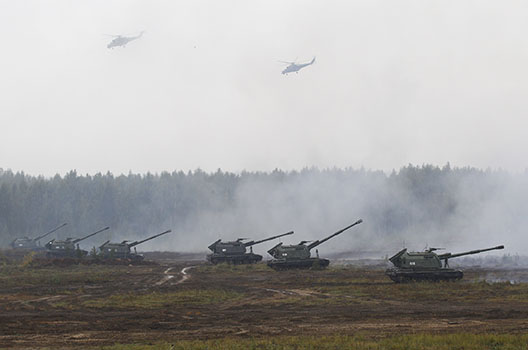 Anti-Access/Area-Denial capabilities (A2/AD)—the ability to prevent an adversary from entering an area of land, sea, or air—have become a major component of military force postures for powers around the globe, but Russia is the most committed to advancing their development. Russian A2/AD capabilities are shaping NATO’s neighborhood and the Alliance needs a comprehensive strategy to counter them effectively in times of peace, crisis, and conflict.

The whole territory of Estonia, Latvia, Lithuania, and Poland, as well as parts of Norway, Romania, and Turkey, are within range of different elements of this Russian A2/AD architecture, which will make it much harder for NATO to defend these areas. A scenario where allied forces must break through Russia’s A2/AD system is highly probable.

Russia’s A2/AD systems are important for two other reasons.

First, a leaner chain of command and streamlined decision-making system mean Russia can act much faster than NATO allowing it to achieve escalation control.

Second, nuclear weapons remain a crucial element of Russia’s escalation dominance strategy. In a situation when allied forces would consider breaking through Russia’s A2/AD system, Russia could threaten to use its nuclear capabilities as a deterrent. Russia’s careful calculations of thresholds and escalation triggers have been more a matter of preference than necessity in a larger military strategy. Through this approach, Russia can control the level of conflict escalation, dominating the mechanism and circumstance of escalations where nuclear elements play a fundamental role.

The NATO summit in Brussels on July 11 and 12 will be the third consecutive one to address the Russian A2/AD threat. Since 2014, NATO has adopted several steps to mitigate some of the challenges linked to A2/AD. NATO’s counter-A2/AD strategy should be based on a strategic six-pack.

First, NATO needs improved advanced defense planning to reflect the constantly changing nature and integration of Russia’s A2/AD capabilities. The Alliance must plan now for entry operations into a non-permissive environment in the future.

Second, NATO’s decision-making processes, including both political and military elements, also must be streamlined. If there is anything the Russian A2/AD systems are vulnerable to, it is the speed of NATO’s actions in the early phases of a crisis. Increasing the speed of recognition, decision, and assembly of forces could considerably diminish the effectiveness of Russia’s A2/AD capabilities.

Third, NATO should increase the number of forces and equipment on allied territory covered by the Russian A2/AD bubbles. There is no better way to deter the A2/AD threat than by stationing additional forces in the theater. This process should be preceded by strengthening the concept of pre-positioning of additional military equipment.

Fourth, readiness, deployability, and sustainability of large military formations, especially ground forces, should be enhanced. NATO’s reinforcement strategy should envisage plans for such formations to break through and operate in an A2/AD environment.

Fifth, the NATO Defense Planning Process should prioritize capabilities, including heavy ones, to counter A2/AD systems on land, in the air, and at sea. These should include electronic warfare, anti-submarine warfare, air defense, Joint Intelligence, Surveillance and Reconnaissance, as well as precision-guided artillery. These capabilities should be embraced by the cross-domain fires concept.

And, sixth, allied formations must regularly train in a non-permissive environment to practice for potential deployments. Moving troops into a zone covered by A2/AD specifically should be an important element of NATO’s training and exercises.

NATO’s deterrence and defense posture is based on credibility. The Alliance must be able to counter Russia’s A2/AD capabilities if it is to remain a reliable defense alliance and security actor.

Dominik P. Jankowski is a political adviser and head of the political section at the Permanent Delegation of the Republic of Poland to NATO.

Image: Armoured vehicles and helicopters take part in the Zapad 2017 war games at a range near the town of Borisov, Belarus September 20, 2017. (REUTERS/Vasily Fedosenko)