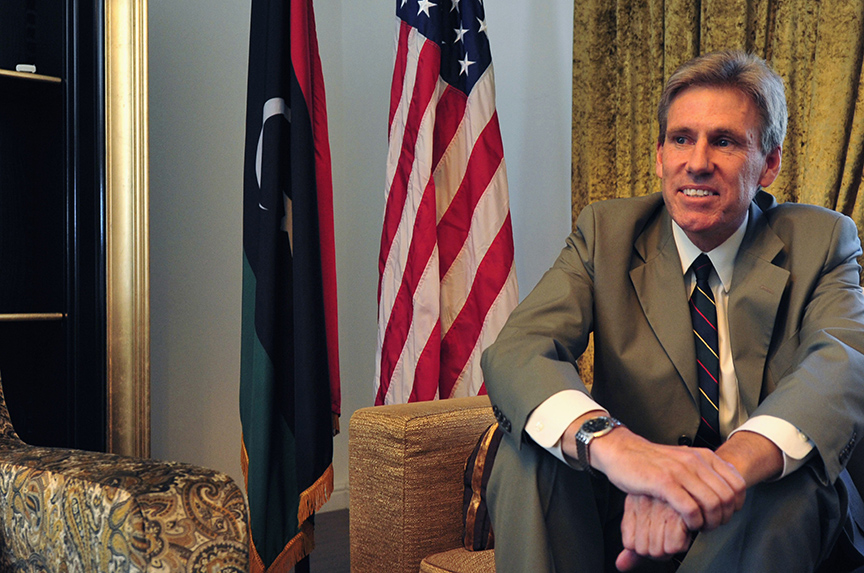 On the night of September 11, 2012, the US diplomatic compound in Benghazi was attacked and burned. The US Ambassador to Libya, Christopher Stevens, who was visiting Libya’s eastern city, and three other US citizens lost their lives. At first, the attack was thought to have been carried out by a mob angry about a video made in the United States that mocked Islam and the Prophet Muhammad. It was later determined to be an act of terrorism.

Six years have passed and Libya remains mired in chaos. The crisis has sharpened in its severity in the years since the ouster of the North African nation’s longtime ruler, Moammar Gadhafi, by rebels backed by the United States, France, and the United Kingdom in 2011. The United States—weary of foreign entanglements—has decreased its attention toward Libya.

The past few days have been replete with reminders of the chaos.

On September 10, gunmen stormed the headquarters of Libya’s national oil company in Tripoli killing as many as half a dozen people.

The attack came on the heels of deadly clashes between militias who control parts of the capital, Tripoli, and an armed group known as the 7th Brigade from the southeastern city of Tarhuna.

In the east is Gen. Khalifa Haftar, one of Gadhafi’s officers who participated in the coup against the monarchy but defected in the late 1980s. Haftar has since positioned himself as a strongman leader of the eastern part of Libya.

In the west, the militias of the city of Misrata are the most powerful among a cluster of armed groups present in the region.

Added to this mélange of militias is the Islamic State of Iraq and al-Sham (ISIS)—a group that no longer has the capacity to realize its goals of establishing a caliphate but has nonetheless proven to be a challenge.

And then there are the human traffickers who have exploited the prevailing chaos to funnel migrants north toward Europe.

Karim Mezran, a resident senior fellow in the Atlantic Council’s Rafik Hariri Center for the Middle East, discussed the complicated situation in an interview with the New Atlanticist’s Ashish Kumar Sen. Here are excerpts from our interview.

Q: What is the situation in Libya today?

Mezran: There is a fragmentation of authority and power. Libya has very weak state institutions—if at all. While there are some stronger municipal authorities, this is by no means homogenous across the country. Military power, too, is divided amongst dozens of militias. Criminality, which is widespread, is getting more and more organized, sophisticated, and powerful.

As the attack on the headquarters of the Libyan National Oil Corporation in Tripoli shows, there continues to be a terrorist presence in the country. While it is too early to say whether ISIS was behind this attack, the lines between criminal organizations and terrorist groups is blurred. This adds to a very complex situation on the ground that has not been helped by the single-minded attention that the United States has paid to political leaders only. What we are now realizing is that the real power lies in the hands of a few militia leaders.

Q: Who are the main actors in Libya today and what is the extent of their power?

Mezran: It is not easy to provide a snapshot. Starting from the east, you have Aguila Saleh, the president of the House of Representatives in Tobruk. There are also some tribal figures in the east. But the most powerful entity in the east is the Libyan National Army (LNA) led by Khalifa Haftar. Despite the name, the LNA it is not the Libyan army. It is an eastern militia with the ambitions of becoming a national entity.

In the west, the city of Misrata is known to have the strongest militias. These militias have been instrumental in defeating ISIS in Sirte and maintaining a barrier with radical Islamists. After a time of quiet, the Misrata militias are once again on the move with their sights set on Tripoli. Some of them have taken advantage of the clashes [with the militia from Tarhuna] last week and are moving toward the capital city. There are rumors that the Misratan militias want to take control of Tripoli to keep it from falling into Haftar’s hands.

It is, overall, a fragmented picture. It is difficult to see how any one actor can dominate.

Q: Why have Prime Minister Fayez al-Serraj and Gen. Haftar been unable to reconcile their differences?

Mezran: The sticking point is that Serraj has no power to deliver whatever he agreed with Haftar [at their meeting in France in 2017]—the control of territory, the creation of an army, and the dismantling of militias. Haftar has been very stubborn in demanding control of the future army of Libya with no civilian oversight. This is unacceptable to the international community and the Serraj government.

Q: What is the way out of this impasse?

Mezran: Haftar’s power is based upon the support he receives from the Egyptians, the Emiratis, and, to a much smaller extent, Russia. It is from this support that he derives his stubbornness.

If the United Nations can play the role of a real mediator and convince these countries to drop their support for Haftar and convince him to participate in negotiations [with Serraj] that could be the beginning of a solution.

Q: Haftar this month revived talk of marching on Tripoli to “liberate” the Libyan capital. Is there a danger of a clash with the Misratans?

Mezran: Haftar wants to ignite a fire. This worries the Misratans and other powers in the west. As a result, a civilian agreement will be much further away.

Q: Libya is expected to hold elections in December. Is this still possible?

Mezran: It is still possible because the authorities, including UNSMIL [the United Nations Support Mission in Libya], say they are committed to hold them by the agreed date of December 10. Nevertheless, I would be very surprised if the elections were held as scheduled.

Q: What can the international community do to move the legislative process forward?

Mezran: It has to foster much more energetically an agreement between Haftar and Serraj that would give birth to a smaller presidential council and a technocratic government under a new prime minister that, with the help of the international community, brings order to the country, restores the economy, and provides some services.

Q: What is your assessment of the approaches adopted by Italy and France to the situation in Libya?

Mezran: The French, while paying lip service to the Serraj government, lean more toward Haftar. They are pushing for elections that they believe Haftar would win. In doing so they would impose Haftar on the international community and enhance their influence in the country.

The Italians are doing exactly the opposite. They don’t believe Haftar is the solution. They want to postpone the elections and have a government that works to diminish Haftar’s powers.

Q: Which is the more realistic approach?

Mezran: Neither. The right approach is a unification of the intentions of the international community. No one is thinking about peace and pluralism in Libya.

Q: To what extent is ISIS a threat in Libya?

Mezran: ISIS is no more a territorial threat in Libya. It will not conquer cities. It has, instead, morphed into a jihadi organization. As we have seen with the recent attacks, the group can inflict a lot of pain.

Q: Besides the security challenges that emanate from Libya, the country is also a significant conduit for migrants fleeing north to Europe and beyond. What is being done to address this challenge?

Mezran: In this moment of collapse of the little authority that there was it is very hard to assess a Libyan response to the humanitarian crisis. As a consequence of the dire security situation, the Libyan coast guard is momentarily out of service. What will probably happen is another exodus of migrants from Libya. The possibility to at least manage migration will be enhanced only by the stabilization of Libya.

Q: Six years after the attack in Benghazi, has the United States washed its hands of Libya?

Mezran: I don’t think they have washed their hands of Libya, but it is definitely not fully engaged any more. Washington does not perceive Libya as being of national interest. The United States pulled out of Libya in 2014 after the clashes intensified between rival militias in Tripoli. The Americans have preferred to delegate the Libyan dossier to the Europeans.

Image: The US Ambassador to Libya, Christopher Stevens, was killed in an attack on a US diplomatic compound in Benghazi, Libya, on September 11, 2012. (Reuters/Esam Al-Fetori)