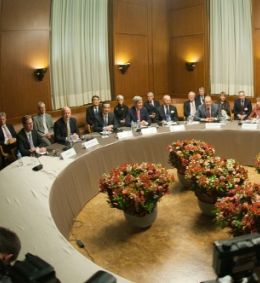 NPR News’ Weekend Edition host Scott Simon spoke with the South Asia Center’s Barbara Slavin about the Iran deal. Slavin believes that Israeli Prime Minister Benjamin Netanyahu may be doing Iran a favor by criticizing the deal so harshly. Transcript and audio from the interview below.

SCOTT SIMON, HOST: This is WEEKEND EDITION from NPR News. I’m Scott Simon. It’s been a week of bartering and salesmanship for diplomats trying to sell the Iran deal back home. Six days ago, Iran and the United States and major European powers, along with Russia and China, signed the first agreement in nearly a decade to try to restrict Iran’s nuclear program.

But what they signed was just a six-month agreement. There is a lot more hard bargaining to come. We asked Barbara Slavin to talk about this. She’s a senior fellow at the Atlantic Council and author of a book about Iran-U.S. relations called “Bitter Friends, Bosom Enemies.” She explained why many countries are opposed to the deal, a list that begins with Israel.

BARBARA SLAVIN: Now the Israelis, in the personage of Bibi Netanyahu, says this is a bad deal and that no deal is better than a bad deal. He’s called it a historic mistake. But Bibi Netanyahu has been opposed to any kind of U.S./Iran rapprochement, really, since the Iran Contra days, since Iraq ceased to be a threat to Israel.

SIMON: But let me draw you out on something. Is this a certain amount of Kabuki Theater, in that does it help make the point that Iran wants to with its hard-liners back home?

SLAVIN: Yeah, I wrote a piece earlier this week suggesting actually that it would be helpful, the fact that Netanyahu was so opposed to this agreement will make it much easier for Hassan Rouhani, the President of Iran, to sell it at home. But I don’t think that Netanyahu is doing this deliberately. I think he is genuinely upset that there is an agreement that does not dismantle Iran’s nuclear infrastructure. That is his bottom line, and it’s not obtainable.

SIMON: Let’s talk about the reception in Iran because I want to read part of a quote from the new President of Iran, Hassan Rouhani. This is a man who tweets holiday greetings to Jews. He wrote to Iran’s supreme leader, the Ayatollah Ali Khamenei, “The nuclear rights and the right of enrichment of Iran was acknowledged by world powers who for years tried to deny that.” Now, he maintains we have the right of enrichment, which is something that a lot of people, you know, think the agreement precludes.

SLAVIN: I just happened to have brought the joint plan of action, which was signed on 24 November in Geneva and it says that the comprehensive solution, which is the endgame, would involve a mutually defined enrichment program with practical limits and transparency measures to ensure the peaceful nature of the program. That means yes.

SLAVIN: But subscribed with or constrained by restrictions to ensure that it is peaceful and that there is transparency. That means that international inspectors will get to see whatever Iran is doing. Now, this is not sufficient for Bibi Netanyahu. He wants no enrichment. But Iran was never going to agree to that, so you had a choice between no deal and this deal.

SIMON: House Speaker John Boehner said of the deal, it has been and will continue to be met with healthy skepticism, and in fact he was joined by a number of Democrats. Is it possible that Congress will say no?

SLAVIN: I think Congress will give Obama a bit of time. I think they might pass some sort of resolution suggesting a sense of the Senate, something like that; that if Iran does not abide by this agreement or if there is no permanent agreement at the end of six months, then X, Y and Z sanctions might come into place. That’s possible.

SIMON: And are there factions in Iran that also have reservations?

SLAVIN: There are indeed. In fact, I’m getting emails from certain hard-line friends of mine that I made during the Mahmoud Ahmadinejad administration and they’re trying to poke as many holes in this agreement as some members of Congress and some neo-conservatives. It’s really quite funny. It’s absolutely a mirror image.

SIMON: Barbara Slavin, who is the author of “Bitter Friends, Bosom Enemies: Iran, the U.S. and the Twisted Path to Confrontation.” Thanks so much for joining us.

SLAVIN: Sure, my pleasure.