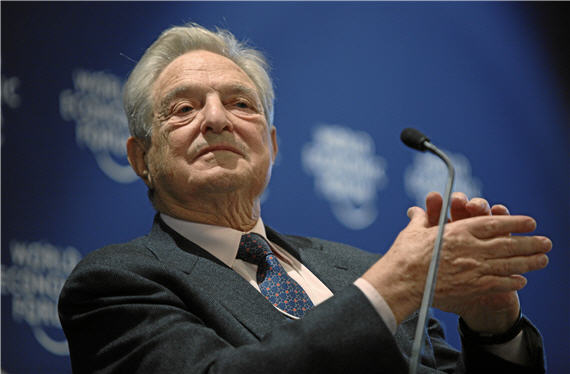 As with the late E.F. Hutton, when George Soros speaks, people listen.  Especially when he predicts the disintegration of the world’s largest economy.

Speaking with BBC from the World Economic Forum in Davos, the billionaire currency trader and philanthropist proclaimed that "The Euro crisis is on the way [to] being solved," thanks to the creation of what amounts to "a common treasury" via the mechanism of a permanent emergency support fund.   While that would seem like good news, indeed, he fears that the "flawed" means with which it’s being implemented could be disastrous.

While the main fear is that the rich countries, notably Germany, will pull out of the common currency, it’s at least as likely that the less solvent countries will find the conditions of their rescue untenable.

“You now have two Europes, the haves and the have-nots,” Soros said. “You will have a two-speed Europe and that isn’t politically sustainable. There is a real danger that the common currency could lead to the political disturbance of the EU. The crisis could inflict such hardship on slow-speed Europe that it may lead to disintegration.”

Soros added, “The existing debt will be left as a burden on the debtor countries. You already have Ireland wanting to renege on that agreement because it is very unjust.”

If countries don’t pay their debt, that means bond holders will be left holding the bag.  Thus far, the European Central Bank has stepped in to bail out the banks and their bondholders, which Soros says was "a mistake" the led to "the situation being messier than it needed to be."

While "The euro was supposed to bring about convergence," Soros believes "effectively it created divergence and that is now being perpetuated."  He continued, "That is the unsolved problem that I think needs to be recognized and some solution found because otherwise I think the euro is clearly here to stay. There’s a clear commitment to the euro. But it could put into motion this very divisive political force of two Europes."

It is, of course, possible for rich and poor economies to operate under a common currency.  The United States has been doing so successfully for most of its existence.  The difference, of course, is that Americans in New York view Americans in Mississippi as fellow countrymen rather than as slackers needing to be propped up.  Europe is a long way from achieving that sense of unity since, despite a common flag, currency, and institutions, it remains a collection of sovereign states.

For the euro to sustain itself, the "convergence" that Soros referred to has to happen.  The current crisis would seem to make that less likely, as Germans and Frenchmen have come to resent the Greeks and Irish as slackers driving down their economy.  Thus far, though, Angela Merkel has grudgingly decided to buck the nationalist sentiment of her own people and do what she must to prop up the euro.  Either she’ll win this fight or her coalition will fall apart and Europe’s strongest economy will decide to go it alone.

If that happens, Soros’ fears will become reality.