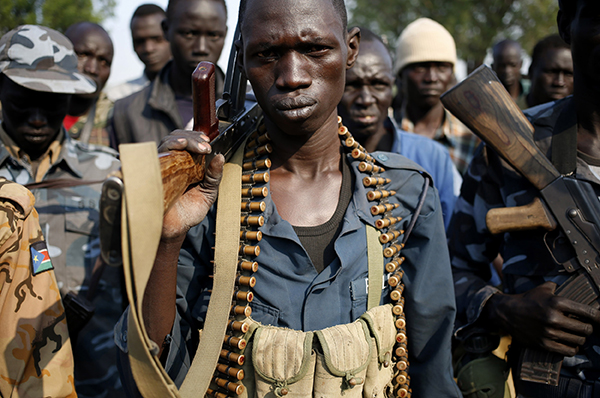 Rebel fighters gathered in a village in South Sudan’s Upper Nile state on February 8, 2014. A seemingly endless cycle of violence in South Sudan has contributed to food insecurity that has caused tens of thousands of people to flee the world’s youngest nation, the UN Refugee Agency said on March 29, 2016. (Reuters/Goran Tomasevic)

Years of conflict, a dysfunctional government, and the international community’s failure to impose tough and meaningful sanctions have contributed to the crippling food insecurity that has caused tens of thousands of people to flee South Sudan, according to the Atlantic Council’s J. Peter Pham.

“No rational farmer anywhere in the world is going to plant crops until he or she is reasonably sure that he or she will be alive and present to reap what they sow,” said Pham, who is the Director of the Atlantic Council’s Africa Center.

UNHCR, the UN Refugee Agency, said on March 29 that food insecurity in South Sudan’s northwestern states of Northern Bahr El Ghazal and Warrap was the reason why some 38,000 people have fled into Sudan since the end of January.

South Sudan gained independence from Sudan in 2011 after more than two decades of civil war. In December of 2013, the world’s youngest nation was plunged back into a familiar cycle of violence after South Sudan’s President, Salva Kiir, accused his Vice President, Riek Machar, of plotting a coup to overthrow him. US officials said at the time that there was no evidence of such a plot. A team of African Union investigators, led by former Nigerian President Olusegun Obasanjo, also found no evidence of a coup plot.

After almost two years of fighting, which left thousands dead and displaced more than two million people, Kiir and Machar agreed in August of 2015 to end the conflict. Under the deal, Kiir reappointed Machar as his Vice President, but the rebels have only slowly trickled back into South Sudan’s capital, Juba, to join the transitional unity government.

With the onset of the rainy season, which turns large swathes of the country impassable, it is hard to tell if the fighting has actually stopped, said Pham. “In a sense, God has imposed a truce, but only the end of the rainy season will tell us if the truce is indicative of a real will to end the conflict or simply a response to temporary logistical difficulties,” he said.

Pham apportioned blame for South Sudan’s current situation to the feud between Kiir and Machar, and an international community that has been unwilling to impose tougher sanctions on key players in the conflict.

“The international community, since it helped create this problem child, has an obligation to stay engaged at the highest levels and enforce some sort of an end to this conflict,” said Pham.

Q: The United Nations has warned of dire food insecurity in South Sudan. How did South Sudan get to this point?

Pham: The international community has been unwilling to impose real sanctions on those so-called leaders who continue to put their own ambitions ahead of the good of the people. There were deadlines set and deadlines missed with very little consequence. That sent a very powerful signal to these people that they could drag their feet. They finally signed the peace agreement, which was supposed to be implemented in a matter of days. That was in September of 2015, and we are now at the end of March 2016. A slow trickle of some of the rebel forces are beginning to arrive in the capital, Juba, in anticipation of the scheduled arrival of rebel leaders so that the warring parties can form a national unity government. But until everyone has arrived and the said government is formed everything is a work in progress.

And that leads directly to why we have food insecurity. This is a country that is predominantly agrarian. Millions of people have been displaced. Those who haven’t been displaced don’t have the certainty, which would motivate them to plant crops. No rational farmer anywhere in the world is going to plant crops until he or she is reasonably sure that he or she will be alive and present to reap what they sow, and that what they sow will not be stolen by ravaging forces marching through the land. All this, on top of the El Niño-driven cyclical issues in East Africa, exacerbates the situation.

My concern is not just for food insecurity, which is a great concern, it is also for the future viability of this country. As this conflict continues, even if there is not an active shooting war at the moment, such few investors as there have been in the country are pulling up stakes.

SABMiller, the global brewer, opened in 2009, before independence, South Sudan’s first-ever brewery. It was a major investment that brought jobs and taxes. After losing money ever since, they are closing down operations. It was one of the largest investments ever outside the hydrocarbon sector in the country when it was built.

MTN South Sudan, the mobile phone company, has over a million subscribers, which is more than ten percent of the population. They are laying off half their workforce. They have just this week shelved plans to build some forty mobile phone towers. This is a company that has invested almost $200 million in the country even in the midst of the conflict. It has not seen a return; it is cutting its losses.

The country is so dependent upon oil that the lack of foreign exchange makes it impossible for these companies to pay their bills and import the raw materials they need. They can’t do business. Even if the conflict eventually does come to a close, the lack of basic structures—especially a mobile phone company—will handicap any prospects for diversification of the economy or economic development for years to come.

Q: Has the ceasefire reached between President Salva Kiir and his onetime, and now current, Vice President, Riek Machar, stuck?

Pham: It is hard to tell because we are beginning the rainy season in South Sudan and traditionally there is no fighting during this season because the country is impassable. So it is impossible to know whether people are keeping the ceasefire because they are committed to peace or simply because it is too much of a quagmire to get anywhere to shoot your enemy. In a sense, God has imposed a truce, but only the end of the rainy season will tell us if the truce is indicative of a real will to end the conflict or simply a response to temporary logistical difficulties.

Q: What role have South Sudan’s neighbors played in this crisis?

Pham: Some, like Ethiopia, are trying to mediate this crisis; others, like Uganda, have intervened on one side of the conflict; and others, like Kenya, have turned the other way and permitted arms shipments, in contravention of international calls to prevent more weapons from flowing to the conflict, to transit their territory. So the neighbors have been very much a mixed blessing for South Sudan.

Q: Has the international community washed its hands off South Sudan? What more should it be doing to ensure that South Sudan is a success?

Pham: The international community, since it helped create this problem child, has an obligation to stay engaged at the highest levels and enforce some sort of an end to this conflict. That means if you set deadlines you actually sanction real people who have influence. The listing of Generals whom no one has ever heard of, and likely do not have any foreign assets, on a travel ban list is not even a slap on the wrist. At the end of the day, it is going to take serious engagement. Sanctions should be imposed on those who fail to meet the obligations that they have undertaken, including the President.

Salva Kiir was never elected President of South Sudan. He became President on the day of independence because he was a regional President. He has never been voted in as President of independent South Sudan and, in fact, very conveniently, the civil war that he started has allowed him to hold on to office well beyond any terms.

This is supposed to be a transition period, which will lead to elections that will in theory enable the people to express their will. But if the people were given a chance to express their will they would undoubtedly turn on the very individuals who have inflicted this misery on them. I am not particularly optimistic that those who are entering the unity government have sufficient incentives to let the people judge them.

You are going to have a transition, but that presumes that these people who are entering the so-called unity government want to have elections. The transition implies you know where you’re going and you have an end state in mind. Instead, given the way it has been managed to date, the transition seems more like a cynical way for the international community to wash its hands of its South Sudan problem. Why would Salva Kiir, or Riek Machar for that matter, transition to elections in which, if the polls were truly free or fair, they would surely do rather poorly?