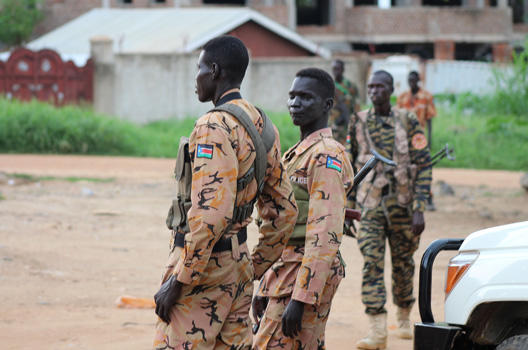 The international community needs to take a more active role in defusing the crisis in South Sudan where gun battles between forces loyal to the president and vice president over the weekend resulted in the death of 200 people, said the Atlantic Council’s J. Peter Pham.

Contending that South Sudan’s president, Salva Kiir, and his vice president, Riek Machar, have been forced into a “shotgun marriage” as a result of an agreement on a unity government, Pham, who is director of the Atlantic Council’s Africa Center, said it is unreasonable to expect to successfully impose reconciliation upon warring factions that are not ready for it.

“One has to look at why it is that they are not ready,” said Pham. “Part of the answer is a failure of leadership among the South Sudanese themselves…As long as we rely on actors whose own interests are not aligned with those of their people or the international community there are always going to be these hiccups.”

In August of 2015, Kiir and Machar agreed to end the conflict that erupted in December of 2013 when Kiir accused Machar of plotting to overthrow him. US officials found no evidence of a coup plot and a team of African Union investigators, led by former Nigerian President Olusegun Obasanjo, similarly found no such evidence.

After more than two decades of war that left around two million people dead, South Sudan gained independence from Sudan in 2011. The violence in Juba over the weekend raised the specter of a replay of 2013 and the possibility of South Sudan slipping back into an all-out war.

Under the terms of a peace deal reached last summer, Kiir reappointed Machar as his vice president in a transitional unity government. But the unity government has been hamstrung from the start by deep-seated political rivalries between Machar and Kiir.

Machar delayed his return to Juba, South Sudan’s capital, to take up his duties amid accusations that he was being obstructed by Kiir. The Kiir government accused Machar of trying to bring with him “an arsenal of arms, inter alia, anti-tanks, laser guided missiles and heavy machine guns.” Given this history it was only a matter of time before a clash between the two sides—much like the kind that took place in Juba this past weekend.

“For the moment, things are contained,” said Pham. “Fighting can continue in Juba where both sides have a limited number of forces concentrated in very close quarters, but at this point because of the weather it is very difficult for either side to move large numbers of forces to a definitive battle. The real question is what happens in a few months when the rains cease and the countryside becomes passable again and forces can begin to move?”

J. Peter Pham spoke in an interview with the New Atlanticist’s Ashish Kumar Sen. Here are excerpts from the interview.

Q: What sparked this latest outbreak of fighting between troops loyal to Kiir and Machar?

Pham: The reporting out of Juba has been somewhat confused and we also have had conflicting accounts of what is happening. The key point to emphasize is that perhaps the specific timing of the outbreak in violence could not have been predicted, but it is no surprise that it has occurred.

The ceasefire agreement, which led to this so-called government of unity or transitional government, was really not something that the warring factions sought or wanted. They were forced into it both by intense pressure from the broader international community, the African Union, and their immediate neighbors as well as the meteorological impossibility of carrying out any major troop movements during the rainy season. So they are in, if you will, a shotgun marriage that neither side sought. There was no true reconciliation in the so-called peace deal. What you have, in fact, is the concentration of a small number of forces that are still, for all intents and purposes, mutually hostile, and with the rainy season blocking mass movement across the country it is inevitable that, absent a real will for peace and reconciliation, those forces being at such close quarters means that some incident could spark violence that would quickly get out of control—as apparently has happened.

The hostility between both parties is palpable. The statements put out by the various representatives of the factions of the conflict, all of whom are supposedly members of the same government, are indicative that these people are members of the same body in name only. A good example is the comments of the Minister of Information, Michael Makuei Lueth. His comments sounded more like those from the spokesman of one side in a conflict rather than a minister representing a government as a whole.

Q: Do Kiir and Machar have full control over their troops?

Pham: We are not altogether sure of the extent to which senior leadership, particularly President Salva Kiir and Vice President Riek Machar, are actually exercising full command and control of the forces that they have supposedly for self-protection in Juba.

South Sudan is a country that is extremely dependent on one single sector for most of its economy and, specifically, most of its government revenue. Well over 90 percent of the government revenue relies on oil production. Two things have happened, first, global oil prices, although they have bounced back slightly, are still at significant lows compared to a few years ago. Second, oil production in South Sudan has been severely curtailed by the civil war, the evacuation of skilled operators as well as the destruction of some of the infrastructure.

As a result, the government is literally destitute. July 9 marked the fifth anniversary of the country’s independence and there were no celebrations because they couldn’t afford to even hold a parade. In a government that is that destitute, when you divvy up the ministries in a power-sharing arrangement for a transition government no resources went along with this. Essentially, you have appointed people heads of ministries with no resources to do the work of the ministry much less to take care of their followers. It is then a question how much command and control they do have over their subordinates’ actions when they have no real leverage over them.

Q: Is the political partnership between Kiir and Machar intact? After this spurt of violence can it be salvaged?

Pham: The partnership, such as it is, is more of a shot-gun marriage than a committed relationship. Over the past year, every step of the way one party or the other has had to be dragged kicking and screaming to the altar, so to speak. The  so-called peace agreement is something that neither wanted, but it was nevertheless forced upon them. There are, however, two common interests that unite Kiir and Machar. One is avoiding being singled out by the international community for obstructing peace and thus being sanctioned as such. Second, and this goes against the interests of the international community, neither of them wants to hold the elections that they have pledged to hold simply because if the people of South Sudan were given a free and fair opportunity to express their will they would certainly turn their backs on the characters who brought the misery of the civil war down upon them. So we are counting on these two to act together to hold elections that are in the interest of neither of them.

A certain self-interest remains that may keep them hitched to each other, but there is certainly no love lost. If either of them sees an opportunity to eliminate the other and create facts on the ground, I am afraid we run the risk of them taking that opportunity.

Q: How bad could things get?

Pham: For the moment, things are contained. Fighting can continue in Juba where both sides have a limited number of forces concentrated in very close quarters, but at this point because of the weather it is very difficult for either side to move large numbers of forces to a definitive battle. The real question is what happens in a few months when the rains cease and the countryside becomes passable again and forces can begin to move?

Q: Besides words of condemnation, what can the international community do to defuse the crisis in South Sudan?

Pham: We have to recognize the fact that we cannot impose a reconciliation upon warring factions that are not ready for it. One has to look at why it is that they are not ready. Part of the answer is a failure of leadership among the South Sudanese themselves. As long as we rely on actors whose own interests are not aligned with those of their people or the international community there are always going to be these hiccups.

The international community needs to be engaged in this at a much higher level. If one goes back to the long history of conflict in what was once Sudan and then Sudan and South Sudan, where there has been progress it has been because the international community had, at a very high level, summoned the political will to be engaged. Such was certainly the case when President [George W.] Bush was intimately engaged along with other world leaders in helping push the Comprehensive Peace Agreement that led to the peaceful breakup of Sudan into Sudan and South Sudan.

Q: What are the alternatives to Kiir and Machar?

Pham: We have to look beyond the status quo. Clearly the status quo has not worked and is not working. That is going to take time. The international community is impatient and would like this problem simply to go away. However, having midwifed the birth of the Africa’s newest country under rather inauspicious circumstances, the world has a responsibility to see that it doesn’t kill itself while still its infancy.