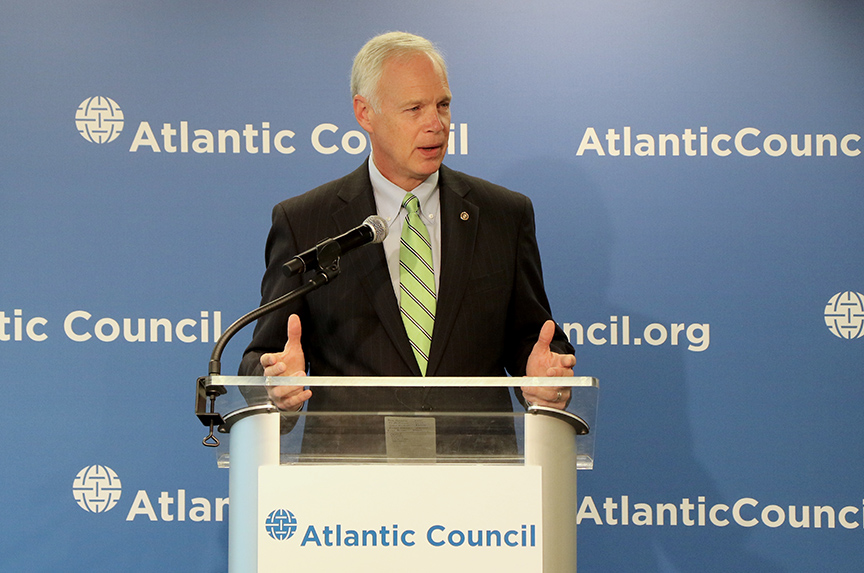 The solution to persistent problems in the Balkans lies with the region’s people, particularly the youth who can catalyze economic reforms and drive the countries of Southeastern Europe toward a vibrant, entrepreneurial economy.

The key, according to US Sen. Ron Johnson (R-Wis.), is rolling back government regulations in order to “spark entrepreneurial zeal.” That spark, said Johnson, is essential for the Balkans—a region with “so many opportunities.”

Speaking at the Atlantic Council’s conference—“A Coming Storm? Shaping a Balkan Future in an Era of Uncertainty”—on November 29, Johnson said: “You need a government regulation system to set the rules of the road… but you don’t need much more than that.” The real source of economic dynamism lies with the entrepreneurs and owner-operated businesses, who, according to Johnson, have the ability to change the region for the better and begin to induce more foreign direct investment (FDI).

“Economy is nothing more than human capital combined with financial capital,” said Johnson, adding that one of those components—a highly educated and motivated people—is readily available in the Balkans.

Young entrepreneurs “can fix the Balkans,” said Mark Boris Andrijanic, director of public policy for Central and Eastern Europe at Uber, “but only if we are allowed to do so.”

Ivica Dačić, first deputy prime minister and minister of foreign affairs of Serbia, described how the countries of the former Yugoslavia have struggled to grow their economies in the post-war period. Corruption and political conflict have generally stifled economic progress throughout the region. However, said Dačić, the Balkan countries have begun exploring how to improve the overall condition of the region and attract foreign investment.

According to Johnson, the best way to draw investors to the Balkans is the encouragement of economic opportunity for entrepreneurs.

Following Johnson’s keynote address, Dačić and Andrijanic joined Behgjet Pacolli, first deputy prime minister and minister of foreign affairs of Kosovo, and Cyril Muller, vice president for Europe and Central Asia at the World Bank, to discuss the role of entrepreneurs in the overall improvement and revitalization of the Balkans.

“Yes, the region can be fixed,” insisted Pacolli. However, he added, “the only chance for the Balkans is to improve the living standards of its citizens.” Andrijanic described how there is a great deal of innovation taking place in the region. However, due to the stifling economic environment and lack of opportunity, young entrepreneurs either leave the Balkans or seek employment in the public sector instead of contributing to a more dynamic economic landscape.

“As you see,” said Pacolli, “we’re poor; maybe the poorest in the region.” Yet, he said, “the region has the potential to provide better lives and opportunities for its people.”

The combination of “human resources, natural resources, [a] dynamic and young population, good geographic location, and access to European markets,” will allow the Balkans to “bring global players to the region and more jobs,” said Pacolli.

However, said Johnson, “there is one word that overrides everything and [that’s] security.” He said security is not simply about peace, but “about security of contract, security of rule of law.” These conditions—generally lacking in the Balkans—are essential for investors, said Johnson.

“It is for sure that the economy could have a very significant role for the stabilization of the entire region,” said Dačić, adding: “On the other hand, it is a process.”

There will be “no growth without the stability of the region because nobody will invest,” according to Dačić.

“You need the certainty that when you’re putting at risk your capital—both human and financial—there’s a level of security that you’re going to be able to bear the fruits of those labors,” Johnson insisted. If the Balkans can create the right kind of environment for investors, beginning with a dynamic entrepreneurial economy, according to Johnson the region will begin to see an overall change. However, entrepreneurship must be encouraged and fostered at an institutional level, he said.

“I don’t believe our region—rich in terms of ancient history, in the middle of Europe—will not be able to become a prosperous territory,” said Pacolli. He added: “I don’t believe the European Union and the United States will allow this region to develop into a black hole of trafficking and terrorism.”

The key, according to Pacolli, “is changing the status quo in economic relations between our countries and key players.” He said the region must seek to attract “new people, new offers, new companies,” namely US companies.

However, he cautioned, “there is a precondition” for change, which is “to forget the past and to see the future.”

Part of forgetting the past in the Balkans will involve overcoming an aversion to working together, according to Dačić. He described how this resistance is tied to the region’s history and may be widely seen as a rebranding of the former Yugoslavia. However, Dačić said, “I believe we have taken important steps in reaching mutual agreement… [and] seeing how to remove barriers to economic opportunity together.”

In addition, he said, “we have promoted economic relations with the United States.”

As a result of these efforts, “economic growth is rebounding in the Balkans,” said Muller. However, he said, another legacy of the former Yugoslavia is that “the state typically has an outsized role in the Western Balkans.”

Johnson cautioned against excessive government regulation which he said has turned the US tax system into “a mess.”

“Beware of government overregulation because it stifles economic activity,” said Johnson. “An efficient, simple, flat-as-possible tax system combined with a limited government regulation system,” is all that is needed to revamp the Balkans’ economy, he said.

According to Muller, “the governments in the Western Balkans should be neighbors, not drivers of economic growth,” so as to let entrepreneurs follow their innovative paths. Otherwise, governments impede the process.

“How can we harness the talent and creativity of each and every citizen in order to make our region more prosperous,” asked Andrijanic. “We have the idea,” he said, but “the institutional capacity is, of course, the problem.”

“Let’s get politics out of business and ordinary peoples’ lives and let’s get our region going,” he added.