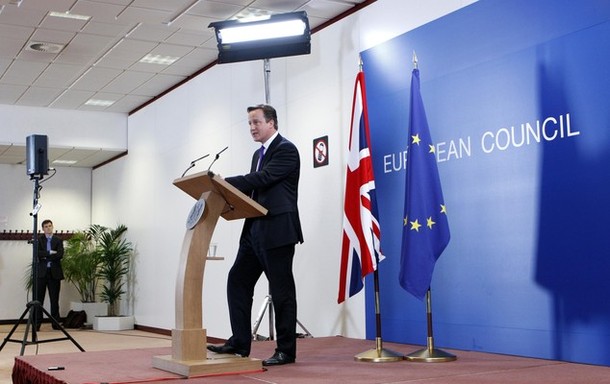 In an article yesterday in London’s Sunday Telegraph, British Prime Minister David Cameron hinted at a possible in/out referendum on Britain’s membership of the EU. “Let us start to spell out in more detail the parts of our European engagement we want and those we want to end”, Cameron urged.

Sadly, this is PR Meister Cameron at his smoke and mirrors worst. Cameron has no intention of putting the question that in recent opinion polls up to 90% of the British people want to answer; should Britain leave the EU?

There was a time when EU membership made strategic sense for Britain. Not any more; the Eurozone crisis is a tipping point. EU membership costs Britain £55 million per day ($86m) or £20 billion per year ($31bn), which is over half the UK defense budget, making Britain the second net contributor after Germany for far, far less benefit. Those politicians who want to lock Britain into an unfavorable relationship with a debt-crushed, economically-sclerotic, growth-free Eurozone (the only EU that matters) claim that should Britain leave the EU the country would lose some 40-50% of its global output. This is scaremongering. Britain has an enormous trade deficit with the Eurozone and some 50-60% of Britain’s trade is with the wider more dynamic world. One only has to visit the UK to see there are few of those beguiling EU signs that one finds all over France and elsewhere celebrating ‘Brussels-funded’ projects; the British are paying for them.

Like much of Britain’s political class David Cameron’s strength is that he is a master political tactician at home, but a hopeless strategist abroad. Indeed, PR-Meister Cameron’s performance at recent EU summits has been utterly lamentable. The Sunday Express article reflects this. It is negotiating madness to say one is going to wait until the Eurozone has decided its future before Britain re-negotiates its membership or indeed its exit. At the very least Cameron needs to re-negotiate the cost of Britain’s EU membership now. This is something former Defense Minister Liam Fox has today rightly pointed out.

There are now only two likely outcomes for this crisis. There will be either a German-French dominated EU that will use some elements of political union to lock the current balance of power into European law, which is not in Britain’s favor. Or, a move towards genuine political union will take place via fiscal and banking union of the sort favored by the EU President, Herman van Rompuy. Both options are utterly irreconcilable with Britain’s political culture.

In his efforts to dance on the head of a political pin Cameron tries to make the distinction between the Euro-EU and the single-market EU. That distinction simply does not exist. Last week’s Van Rompuy plan for banking union shot Cameron’s one remaining fox. In effect, a two-tier single market in banking is being created; one for the Eurozone and the other for the non-Eurozone. For Britain a true single market in banking and financial services has been the holy grail for many years. However, even before the current crisis Germany did everything to block such a market because Berlin and Frankfurt feared the power of the City of London. Under current plans London would be shut out in favor of Frankfurt, not least because it is the Germans who are going to write the rules of banking union.

One can only hope that behind the scenes there is some method in Cameron’s madness. By calling on the British people to “show tactical and strategic patience” he is maybe hoping to make the case for exit irresistible or at the very least creating negotiating space. He claims after all to be a “pragmatic euro-sceptic”. He may also be right. Indeed, as power shifts away from most (not all) EU member-states to Brussels, and the European people become ever more subject to distant, technocratic unelected fiat, the dangers of political union will become obvious.

Sadly, my bet is that Cameron is mortgaging Britain’s strategic future for his own political neck. By calling for “patience” Cameron’s real concern is to stop votes leaking from his political base to the UK Independence Party and to kick this particular can down the road until after the next election when he hopes that will not have to co-habit with Lib Dem leader Nick Clegg, the European Commission’s point man in London. And, by then the referendum over Scottish independence will have been settled.

There may be a way for sensible people in London, Berlin and Paris to find a way to make EU membership work again for Britain but it is now very hard to see. Today the British people pay far too much for far too little in an unbalanced relationship. That relationship will become set in European political concrete unless Prime Minister Cameron ups his game and begins to exert demonstrable influence over a Brussels run by people who are not natural supporters of the British view of Europe.

Stop playing games over Europe, Mr Cameron. It is far too serious and your position indefensible.