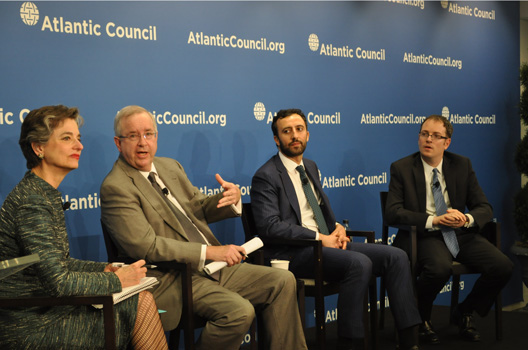 Saudi Arabia and Israel find themselves in the same camp as opponents of a nuclear deal with Iran, but the Sunni kingdom and Jewish state have very different reasons for their opposition. Israelis are concerned mainly with a nuclear-armed Iran, while the Saudis worry more about Iran’s growing regional influence, analysts said March 16 at the Atlantic Council.

“For the Israelis, nuclear Iran seems to be an existential issue, or at least they portray it that way,” said Richard LeBaron, Nonresident Senior Fellow at the Atlantic Council, adding that he did not agree with that portrayal.

“But for the Saudis … it’s been a traditional concern about Iran’s intentions in the Gulf,” he added during a panel discussion.

Iran has seen its regional influence grow with the Shiite Houthi revolution in Yemen and the prominent role Shiite militias are taking in the fight against the Islamic State in Iraq and al-Sham (ISIS) in Iraq. CIA Director John Brennan recently acknowledged an “alignment of some interests” between the United States and Iran in the anti-ISIS fight.

Arab Gulf states are deeply anxious about a US “pivot to Persia,” said Ilan Goldenberg, Director of the Middle East Security Program at the Center for a New American Security.

The United States will not pursue such a strategic pivot, said Goldenberg. Instead, he said, “American policy right now is about taking a dysfunctional, adversarial relationship with Iran and converting it to one of more healthy competition.”

“I don’t think there is a nuclear deal between the United States and Iran that Saudi Arabia will ever want or accept because they don’t care about the nuclear program nearly as much as they care about regional power, and when all you care about is regional influence and power, what you want is Iran in a box,” he added.

US Secretary of State John F. Kerry and his Iranian counterpart, Foreign Minister Mohammad Javad Zarif, held talks in Switzerland March 16 to try agree to the outlines of a deal before the March 31 deadline. Negotiators from the other five countries—Britain, France, Russia, China, and Germany, part of the so-called P5+1—will join the discussions on March 17. The parties in the talks have set a June 30 deadline to finalize an accord.

A deal would allow the West to lift sanctions on Iran in exchange for Tehran accepting curbs on its nuclear activities for a number of years, expected to be ten. Differences remain, however, on the issues of Iran’s future uranium enrichment capacity and the lifting of sanctions.

A senior Saudi prince this week warned that Saudi Arabia and other countries would demand similar terms agreed for Iran in any nuclear deal.

“I’ve always said whatever comes out of these talks, we will want the same,” Prince Turki al-Faisal, Saudi Arabia’s former intelligence chief, told the BBC in an interview.

“So if Iran has the ability to enrich uranium to whatever level, it’s not just Saudi Arabia that’s going to ask for that. … The whole world will be an open door to go that route without any inhibition, and that’s my main objection to this P5+1 process,” he added.

The comments followed a recent visit to Riyadh by Kerry, during which the Secretary sought to allay Saudi and Sunni Persian Gulf countries that worry a nuclear deal will strengthen Shia Iran.

“Preventing a nuclear-armed Iran will… address many of the concerns of the region. It will alleviate tension and remove barriers to regional security. It will reduce the pressure for a regional nuclear arms race, and it will increase the strength of the international nonproliferation regime. It will also vastly improve the prospects for peace both here and elsewhere,” Kerry said alongside Saudi Foreign Minister Prince Saud al-Faisal.

LeBaron, a former US Ambassador to Kuwait, doesn’t think the Saudis are eager to obtain nuclear weapons.

He also said a “great deal of angst” exists among some members of the Gulf Cooperation Council (GCC), which comprises Bahrain, Kuwait, Oman, Qatar, Saudi Arabia, and the United Arab Emirates, about “Saudi saber rattling” on Iran.

Earlier this month, forty-seven Republican Senators wrote an open letter to Iran’s leaders, warning them against striking a deal with the Obama administration because “the next President could revoke such an executive agreement with the stroke of a pen, and future Congresses could modify the terms of the agreement at any time.”

Obama said he was “embarrassed” for the Republicans who sent the letter.

Congressional support is key to the viability of any deal with Iran, said Alireza Nader, a Senior International Policy Analyst at the Rand Corporation.

“There are a number of things that can create an unstable post-deal environment. Opposition from Congress is one… If we want a very solid long-term deal, Congress will have to play an important role,” he added.

Barbara Slavin, a Senior Fellow in the Atlantic Council’s South Asia Center who moderated the panel discussion, said a senior Iranian official told her that the strategy for the nuclear negotiations is that legislators in Washington and Tehran will initially have “zero role to play” and “this is an agreement between two administrations and only over time do you bring in your legislators to ratify” the deal’s provisions.

“This has very much been set up as between the two executives,” she added.

In an effort to limit congressional action, the Obama administration urged a top Republican to shelve legislation that would require Congress to vote on any deal with Iran and waive the President’s authority to suspend sanctions.

The bill would “potentially prevent any deal from succeeding,” White House Chief of Staff Denis McDonough wrote in a letter to Sen. Bob Corker (R-TN), Chairman of the Senate Foreign Relations Committee.

“We believe that the legislation would likely have a profoundly negative impact on the ongoing negotiations—emboldening Iranian hardliners…and once again calling into question our ability to negotiate this deal,” McDonough added.

Image: From left: Barbara Slavin, a Senior Fellow in the Atlantic Council’s South Asia Center, on March 16 moderated a panel on Iran that included Richard LeBaron, Nonresident Senior Fellow at the Atlantic Council; Alireza Nader, a Senior International Policy Analyst at the Rand Corporation; and Ilan Goldenberg, Director of the Middle East Security Program at the Center for a New American Security.