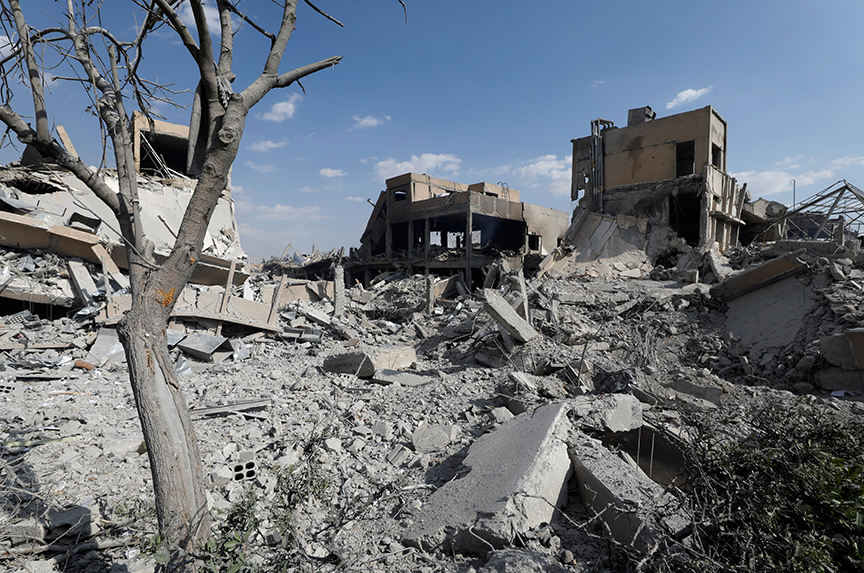 There is no evidence that US President Donald J. Trump has any intention of changing Bashar al-Assad’s calculus in Syria, according to H.A. Hellyer, a nonresident senior fellow at the Atlantic Council’s Rafik Hariri Center for the Middle East.

US, British, and French forces conducted airstrikes on chemical weapons facilities in Syria on April 14. Hellyer said the strikes on Syria were a “continuation of an as yet incoherent strategy.”

The strikes were in retaliation for an April 7 attack on the Damascus suburb of Douma in which the use of chemical weapons is suspected. While Western governments blamed Assad regime’s for the attack, Russia said the incident had been fabricated.

On April 14, US Defense Secretary James Mattis described the attacks as a one-time event, but Nikki Haley, the US ambassador the United Nations, said that the United States remains “locked and loaded” in the event of another chemical weapons attack.

Since 2011, Assad has presided over a war in Syria that has claimed upwards of 400,000 lives. According to the United Nations, more than five million people have fled Syria since the start of the war and six million are displaced within the country. Assad, meanwhile, has consolidated control. The repercussions of the refugee crisis are being felt beyond Syria’s neighbourhood—in Europe and North America.

The US strategy on Syria “is meant to contain Syrian troubles to Syria—i.e., ISIS and refugees,” said Hellyer.

“But, and here let’s be frank, we don’t care enough about Syrian civilians to do anything more than that,” he added.

Hellyer commented on the developments in Syria in an e-mail interview with the New Atlanticist. Here are excerpts of the interview.

Q: US Defense Secretary James Mattis said the strikes were a “one-time” shot. Do you expect them then to change Assad’s calculus?

Hellyer: No, and frankly, that’s by design. There is no evidence to suggest that the Trump administration, as of yet, has any intention for this to change Assad’s calculus—but it ensures that Trump can say he did “something.”

Q: Do you see a coherent US strategy for Syria forming? If not, what should the strategy be in order to be effective and achieve the objective of ending the war?

Hellyer: No, I see a continuation of an as yet incoherent strategy. That strategy is meant to contain Syrian troubles to Syria—i.e., ISIS and refugees. But, and here let’s be frank, we don’t care enough about Syrian civilians to do anything more than that. It’s shameful, but that’s the truth—and no one should think that an administration that has been so unwilling to accept even a handful of Syrian refugees is truly interested in their welfare.

Hellyer: Perhaps, but one can hope that if not, at least the Assad regime will think twice before using the capacity they have.

Q: What has been the regional response to the strikes?

Hellyer: Mixed. Turkey has been supportive of it, as has Saudi Arabia. Egypt hasn’t been, and of course, Iran has been against it. But it’s unlikely that anyone will actually do anything in response.

Image: The Syrian Scientific Research Centre in Damascus was targeted by US and allied airstrikes on April 14. (Reuters/Omar Sanadiki)