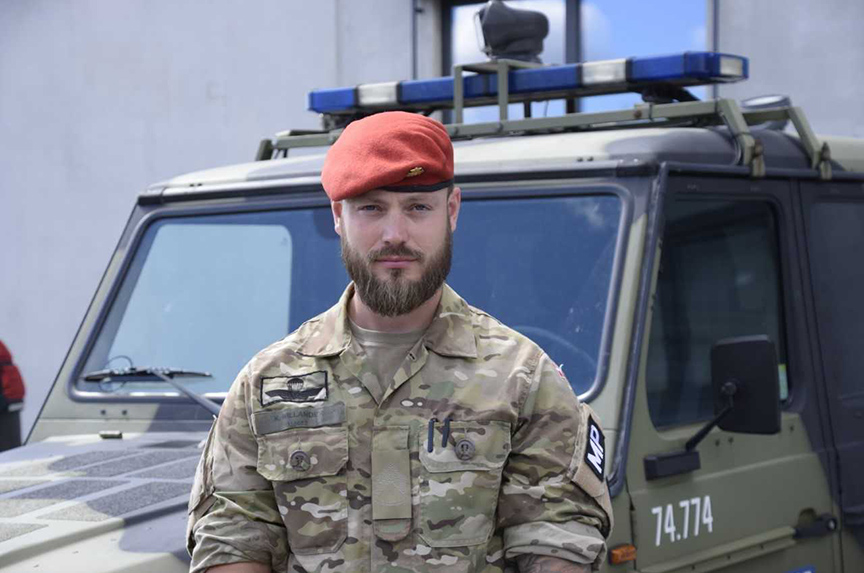 Sgt. Kenneth Willander vividly recalls the day his comrade and friend, Pte. Steffen Bloch Larsen, was shot and killed by the Taliban in Afghanistan.

Willander, who was injured in the Taliban ambush on September 19, 2009, and Larsen traveled together in a helicopter to the Camp Bastion Field Hospital in Helmand province. “Sitting in the Black Hawk helicopter holding his hand during the flight is the strongest memory I have,” he said. “We tried everything to save him.”

“It is a hard job to maintain your focus every day when your closest friends die,” Willander added.

In his twenties, Willander recalled the pride he saw in his grandfather when he wore his Danish Army captain’s uniform. The memory drew him to join the ranks of Denmark’s Royal Danish Army.

“When I had the chance to volunteer, I volunteered,” said the now thirty-two-year-old sergeant in the Danish Military Police. It was not only fighting terrorism that attracted him to the forces, but also a sense of adventure. “You want to make a difference and get experience at the same time,” he said.

For the first four months after joining he worked as a conscript. The following four months were ceremonial guard duty before he could return to his regiment.

After two years of training, he soon found himself in Afghanistan in 2008 after signing up for the mission. “When you are in an infantry company you only train for one thing: battle,” Willander explained.

The size of Denmark’s infantry means “we got to know each other well” and many of the soldiers he trained with “are people I still see today.”

During two tours from 2008 to 2010, Willander was stationed at Forward Operating Base (FOB) Armadillo in Afghanistan’s Helmand province. It was less than a kilometer from Taliban positions. “I was at the frontline in a small FOB doing infantry work and fighting the Taliban,” he said. “That situation and that task, it was dangerous. You accept the possibility of death.”

He saw conflict firsthand. Between 2008 and 2009, he walked patrols daily to the frontline north of the base. His platoon repeatedly got into firefights with the Taliban and was hit by IEDs.

The base and some of the events that unfolded during six months when Willander was there were featured in a 2010 Danish documentary Armadillo. It won the 2010 Cannes Film Festival’s Grand Prix de la Semaine de la Critique Award.

After his tours in Afghanistan, Willander returned to civilian life and trained as a carpenter. He ran his own company for three years.

Yet the call of adventure and friends pulled him back.

Willander returned to the military as an engineer stationed at Turkey’s Incirlik Air Base in 2016 and achieved the rank of sergeant. He soon applied to join the military police. “In Denmark, there are proud traditions of being in the military police,” he said. It is very competitive to join since there are only thirty slots in the training program each year. There are “lots of physical tests” and the program lasts ten and a half months.

Now he’s stationed as part of the NATO multinational battalion at the Tapa Army Base in Estonia. The challenge is much different from facing off against the Taliban.

The base is a little more than 100 km from Estonia’s border with Russia. Estonia joined NATO in 2004 and the former Soviet republic was one of the first to experience mysterious cyberattacks and fake news.

In 2007, cyberattacks shut down the websites of Estonia’s banks and hit the country’s parliament, ministries, and media.

Russia has called allegations of the Kremlin’s involvement unfounded. Later investigations found the attacks came from Russian IP addresses and instructions to the hackers were delivered in Russian. Moscow refused to help Estonia investigate who was responsible.

Today, Willander said, working with security on the base is a key part of protecting Danish soldiers there.

That’s just one part of his job in the Danish military police. “You have to be very well educated in so many areas,” he said. The job consists of everything from investigations to arrests, counterintelligence, and protective escorts for Danish troops on exercises.

Willander’s task is looking out for Danish soldiers. Yet there’s also a lot of cooperation with NATO and the Estonian and British troops stationed at the base. “We do a lot of escorts together with the Brits,” he said.

“We work closely with the English, Danish, and Estonians. Everything is so close,” he said. “We have this NATO cooperation.” That bond goes back to when he served alongside British and US soldiers in Afghanistan. “I like the cooperation between the countries and learning about new cultures,” he said.

Joining the civilian police force isn’t in the cards if he ever left the military. “I like the investigation part, and the high-risk, close protection part of it,” Willander said, “but I don’t think civilian policework fits with me.”

In Estonia, Willander has explored the country and its history with Denmark which ruled Estonian territory during the Middle Ages. “We drive so much around in the country,” he said, adding he’s visited the sites of historic battles. “It’s very northern and Scandinavian.”

There’s not much time to get too comfortable, though. Willander and Danish troops will only remain in Tapa for a short time. In mid-January, they will hand over to a contingent of Belgian soldiers who will take their place.

Next, Willander and the soldiers he protects will redeploy back to their home country. “I like being deployed. I like the cooperation between the countries and learning about new cultures and the ability to do things in other countries. You want to help make a change.”