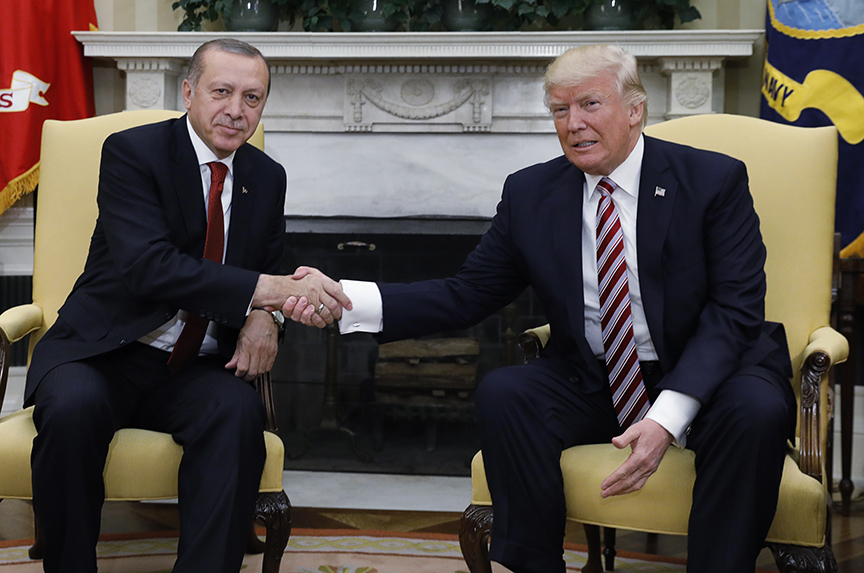 US President Donald J. Trump (right) met Turkish President Recep Tayyip Erdoğan in the Oval Office of the White House in Washington on May 16. (Reuters/Kevin Lamarque)

In his brief time in the White House, US President Donald J. Trump has made a point of bestowing praise on the world’s leading autocrats. He repeatedly called Vladimir Putin a “strong leader,” described Xi Jinping as “a very good man,” said Egypt’s Abdel Fattah el-Sisi was doing a “fantastic job,” and lauded Turkey’s Recep Tayyip Erdoğan for his triumph in a referendum that greatly expanded his presidential powers.

Trump’s new friends represent a rogues’ gallery of modern authoritarians.  These 21st-century strongmen are responsible for introducing an arsenal of new tactics to use against their domestic opponents, and have gone on the offensive in an effort to subvert and replace the liberal international order.

But modern authoritarian systems are not simply adversaries of free societies. They also represent an alternative model—a nuanced system anchored in regime control of government policy, the political message, the economy, and the organs of repression and a steadfast hostility to free expression, honest government, and pluralism.

Until recently, the spread of modern authoritarianism has largely been greeted with complacency and indifference in the democratic world, and it has become more obvious that democracies are poorly equipped to contend with resurgent repression. Meanwhile, the major autocracies are experimenting with more frightening methods of ensuring domestic political control.

China, in particular, seemed to take an Orwellian turn with the planned introduction of a social credit system. This form of digital totalitarianism will allow the state to gather information on Chinese citizens from a variety of sources and use it to maintain scores or rankings based on an individual’s perceived trustworthiness, including on political matters. Chinese officials have claimed that by 2020, the system will “allow the trustworthy to roam everywhere under heaven while making it hard for the discredited to take a single step.”

As for Russia, the Kremlin complemented its covert interference overseas with open and ugly acts of repression at home. In one brief period earlier this year, Russian opposition politician Alexei Navalny was blocked from competing in the 2018 presidential contest through a trumped-up criminal conviction, dissident journalist Vladimir Kara-Murza nearly died from his second suspected poisoning, and the Russian parliament passed a law to decriminalize domestic violence that results in “minor harm” such as small lacerations and bruising. Proponents of the domestic abuse law hailed it as a win for traditional family values.  Navalny, meanwhile, was jailed on June 12 following an anti-corruption rally in Moscow.

At the same time, the Kremlin has also kept up its pressure on Ukraine through support of the rebels in the eastern breakaway regions while intensifying repression in Crimea.

The confluence of authoritarian gains and setbacks for democracy suggest a number of conclusions:

Arch Puddington is distinguished Scholar for Democracy Studies at Freedom House and author of the recently released study, “Breaking Down Democracy: The Strategies, Goals, and Methods of Modern Authoritarians.”