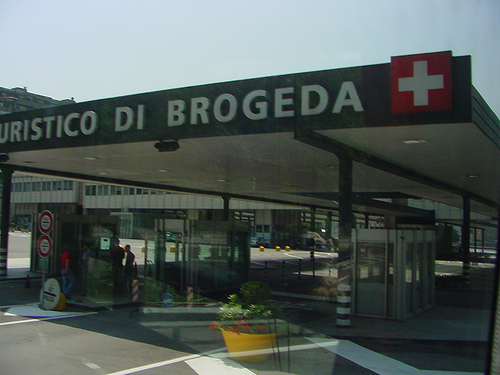 Switzerland has opened its borders to Europe, Deutsche Welle reports:

For the 700,000 commuters who cross the borders between European Union countries and Switzerland every day, life got just a little bit easier on Friday.

As clocks struck midnight, Switzerland officially joined the Schengen agreement, meaning passports will no longer be checked at the border crossings between the confederation and the rest of Europe.

For non-EU residents, the big difference will be that a Schengen visa will get them into Switzerland, and a Swiss visa will grant them access to the rest of Europe. Passengers on flights between Swiss airports and other Schengen-zone destinations, however, will continue to have to show their passports until March 29, to allow for airports to implement necessary changes.

Swiss officials said they joined the agreement largely to gain access to Schengen security information, granting them better knowledge about terrorism, criminal threats and asylum seekers. The system also allows them to share their intelligence with other members.  Previously, Switzerland was considered as an island” by the criminals, Hans Arzethauser, a spokesman for the Swiss border security force, told AFP news agency.

Ironically, Switzerland will now have to put up a border crossing where it has not had one for decades, on the border with the tiny Principality of Liechtenstein. As the principality has no airport – except for a small heliport – and is landlocked between Austria and Switzerland, most people have no way in or out of the country without going through a Schengen country. Liechtenstein is tentatively set to join the agreement next year.

This is a rare case, indeed, of improved security coming along with increased freedom and convenience.  It’s amazing that it took Switzerland so long to get on board.