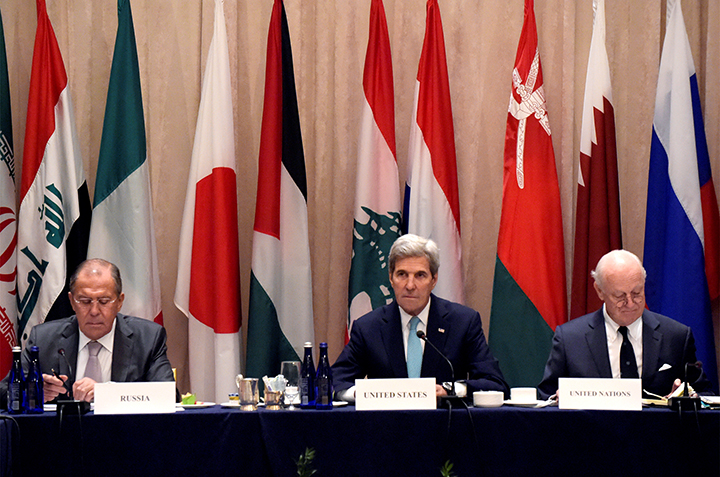 The United States and Russia have little chance of resurrecting the fragile Syria ceasefire, said Frederic C. Hof, director of the Atlantic Council’s Rafik Hariri Center for the Middle East.

“The odds do not favor the ceasefire being salvaged, sad to say,” said Hof, who served in the Obama administration as a special adviser for transition in Syria.

“The Assad regime and Russia seem to be greeting the apparent collapse of the John Kerry initiative with palpable relief,” he added.

The Syrian military has said that the truce is over; US and Russian officials have privately offered pessimistic assessments of whether they believe it can be put back together again; and a Syrian opposition leader said efforts to achieve a truce would fail if there are no consequences for violations. However, US Secretary of State John Kerry said that the “ceasefire is not dead.”

At a meeting of the International Syria Support Group in New York on September 20, it was agreed that “there was still an imperative to pursue a nationwide cessation of hostilities” in Syria, said State Department spokesman John Kirby.

Earlier in the day, the United Nations suspended all aid convoys in Syria after its trucks, which were carrying food, clothes, and medical supplies, were attacked near the western city of Aleppo. As many as 275,000 people are cut off from food, water, and electricity in eastern Aleppo, according to UN officials.

A Russian defense ministry spokesman said neither Russian nor Syrian aircraft had struck the UN convoy. US officials, however, blamed Russian warplanes for the convoy attack in which at least twenty people were killed.

The ceasefire deal, brokered by Kerry and his Russian counterpart, Sergey Lavrov, ran into trouble soon after it went into effect on September 12. On September 17, US warplanes, apparently inadvertently, shelled Syrian troops in the eastern Deir al-Zour province killing more than sixty soldiers.

The deal envisioned eventual coordination between the United States and Russia on targeting the Islamic State and a former al Qaeda affiliate in Syria after seven consecutive days of reduced violence. This aspect of the agreement was met with some opposition from the Pentagon.

In 2012, the Obama administration designated the Nusra Front, an affiliate of al Qaeda, a foreign terrorist organization. In July, the Nusra Front rebranded itself as Jabhat Fateh al Sham and announced that it had cut its ties to al Qaeda.

This is where matters get complicated. Jabhat Fateh al Sham fighters closely coordinate with US-backed rebel groups in Idlib province and, to a lesser extent, in western Aleppo. The blurring of lines between Jabhat Fateh al Sham and US-backed rebels has led to accusations from Russia that the United States is not doing enough to separate terrorists from moderate rebels.

At the support group meeting in New York, participants acknowledged the difficulties of separating Jabhat Fateh al Sham from the moderate opposition in some parts of Syria.

“US-backed rebels most definitely wish to separate themselves from the former Nusra Front,” said Hof.

“It will be somewhere between difficult and impossible for them to do so without robust assistance from Washington and others and with regime ground attacks—supported by Russian air and Iranian-led foreign fighters—ongoing,” he added.

Frederic C. Hof commented in an e-mail interview with the New Atlanticist’s Ashish Kumar Sen. Here are excerpts from our interview.

Q: Can the ceasefire brokered by Kerry and Lavrov be salvaged?

Hof: The odds do not favor the ceasefire being salvaged, sad to say. The Assad regime, Russia, and Iran have diligently pursued a strategy featuring attacks on civilians: their homes, hospitals, marketplaces, and mosques.  It’s the age-old game of trying to separate rebels from their civilian support base by terrorizing and killing non-combatants on an industrial scale. The Assad regime and Russia seem to be greeting the apparent collapse of the John Kerry initiative with palpable relief.

Q: In light of the collapse of the ceasefire, what should be Plan B?

Hof: The best Plan B for the United States would involve offering a modicum of protection for Syrian civilians from the Assad regime in western Syria, accelerating the military defeat of ISIS (ISIL, Islamic State, Daesh) in eastern Syria, and preparing our partners in the Syrian opposition to govern areas liberated from ISIS.  The failure of Washington to use limited military means—cruise missiles and the like—to end Assad’s civilian slaughter free ride has only encouraged mass homicide with genocidal-like effects. Defeating ISIS decisively will require a professional ground force much more capable than the Kurdish militia currently being employed: perhaps a regional and European coalition-of-the-willing led by the United States. And we will need Syrians to administer areas liberated from ISIS: the opposition we recognized in 2012 as the legitimate representative of the Syrian people must, at long last, receive real support.  A Plan B along these lines can stabilize the country and set the stage for real peace talks. And it requires neither invasion, nor occupation, nor violent regime change.

Q: US officials say Russia bears the burden of demonstrating its commitment to peace. Does the Kremlin have the necessary leverage over Assad to halt Syrian military strikes?

Hof: Russia has influence over Assad. But it is far from absolute or decisive.  In the end, Assad will do what he thinks best to preserve the family business: no matter what it takes or how long.  And Russia’s [President Vladimir] Putin—touting as he does Assad’s political survival as the definitive defeat of what he calls the American regime change agenda—cannot, by definition, present Assad with an enforceable “or else.”

Moreover, Russian pilots have demonstrated for nearly a year in Syria a real appetite for the kinds of civilian targets favored by Moscow’s client. More recently, Russia failed to obtain its client’s authorization for humanitarian relief to move to needy civilians. In the end, Assad’s political survival is important for Putin domestically.  He can claim Russia is back and can easily best a conflicted, self-doubting, and unsure Washington.

Q: Under the terms of the ceasefire agreement, are all participants required to guarantee the protection of civilians? What do you propose should be done to remove civilians from the Assad regime’s bullseye, and why has that not happened so far?

Hof: Assad will bomb and shell civilian residential neighborhoods with absolute impunity so long as he pays no price for doing so.  If his jets and helicopters find themselves dodging effective anti-air weaponry or being blown to pieces on airbases with cratered runways it would be a different story entirely. My sense is that the [Obama] administration’s fear of offending Iran—signatory of a landmark, legacy-enhancing nuclear deal and enthusiastic support of Bashar al-Assad—has been paralytic.

Hof: US-backed rebels most definitely wish to separate themselves from the former Nusra Front.  It will be somewhere between difficult and impossible for them to do so without robust assistance from Washington and others and with regime ground attacks—supported by Russian air and Iranian-led foreign fighters—ongoing.  A tremendous burden of risk has been placed on these fighters. They doubt American commitment and seek guarantees. They are neither crazy nor unreasonable to do so.

Hof: Several weeks ago Russia, Iran and the Assad regime mounted a major effort to surround and besiege rebel-held areas of Aleppo and its suburbs.  This effort required all anti-Assad armed groups to coalesce.  If Russia’s complaints were anything other than rhetorical insincerity, it would work to lift sieges and permit UN humanitarian convoys to move in.  Rebel forces cannot separate from Nusra elements while under regime, Russian, and Iranian attack.  It will not happen.

Q: Following Jabhat Fateh al Sham’s recent claim to have cut ties with al Qaeda, and considering its relationship with US-backed rebels, should the Obama administration revisit its 2012 decision to designate the group a foreign terrorist organization?

Hof: The cutting of ties between the Nusra Front and al Qaeda is illusory and meaningless. So is the idea that organizations linked to or descended from al Qaeda can be decisively beaten in Syria while Assad and his allies run amok massacring civilians.  The designation of Nusra will stand.  The decades-old designation of the Assad regime as a state sponsor of terrorism is perhaps more relevant to current circumstances, as the regime’s practice of state terror is a recruiting bonanza for ISIS, the Nusra Front, and other loathsome actors littering Syria’s political-military stage.