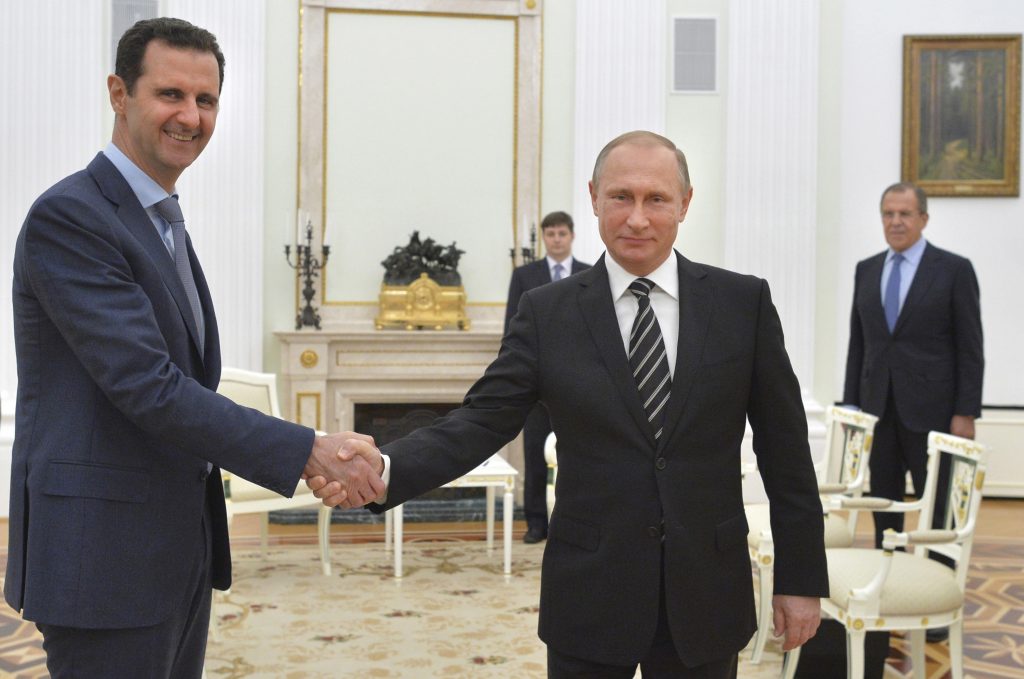 Russian President Vladimir Putin (right) shakes hands with Syrian President Bashar al-Assad during a meeting at the Kremlin in Moscow, Russia, on October 20. Assad made a surprise visit to Moscow to thank Putin for launching airstrikes against Islamist militants in Syria. (Reuters/Alexei Druzhinin)

Last week, Bashar al-Assad’s regime in Syria illegally recognized Abkhazia and Tskhinvali (so-called South Ossetia), two historic regions of Georgia, as independent states. This was done undoubtedly at the behest of Assad’s main patron—Russia. With this act, the Assad regime declared its support for Russia’s military aggression against Georgia, the illegal occupation of Abkhazia and Tskhinvali, and the ethnic cleansing that is taking place in these territories.

Georgians see this Russian provocation as a response to our celebration of 100 years of independence from the Russian Empire.  Since the 1990s, Russia has exercised de facto control over Abkhazia and Tskhinvali by backing separatist regimes. In August 2008, Russia conducted open military aggression against Georgia, sent its regular military forces into our country, and seized our territories. It then illegally proclaimed these territories to be the independent “Republic of Abkhazia” and “Republic of South Ossetia.” In order to win support for its actions, Russia then arranged for a few pliable states—Nicaragua, Venezuela, and Nauru—to recognize the “independence” of these Georgian regions.

The majority of the international community, including four of the five permanent members of the United Nations’ Security Council besides Russia, rejects Russia’s actions. Nevertheless, Russia continues to violate the European Union-mediated August 2008 ceasefire agreement with Georgia. It is attempting to absorb Abkhazia and Tskhinvali into its military, security, and socioeconomic spheres; isolate these regions from any international presence while committing human rights violations, including  arbitrary killings of Georgians, without consequences;  engage in ethnic cleansing while blocking any discussion on the return of more than 70 percent of the local population who now live as internally displaced persons and refugees;  and conduct a policy of Russification by allowing only Russian-language education in the regions’ schools.

Russia is using all the tools in its toolkit, including the “hybrid” machinations it uses across the West. Its use of Syria to poke an unsubtle thumb in the international community’s eyes was predictable. This action contradicts the US position on Georgia’s territorial integrity and sovereignty—a position that was reiterated during Georgian Prime Minister Giorgi Kvirikashvili’s meetings with members of the Trump administration, including Vice President Mike Pence and US Secretary of State Mike Pompeo, in Washington in May. Georgia has every reason to believe that its special relationship with the United States will strengthen and grow.

Russia may hope that using Syria to compromise sovereign Georgian territories will send a message to other states on its periphery that were once imprisoned within Soviet borders and that Russia sees as still within its “sphere of influence.”  There should be no place for this old style of thinking in the modern world.

Russia should instead welcome the prosperity and stability of its neighbors, including Georgia. Prosperity, despite Russian opposition, is fast approaching. Georgia is a progressive democracy and is playing a growing role in trade, transport, and investment that is defining Eurasia and benefits states and investors around the world.  Russia’s efforts to undermine Georgia, and US support for Georgia through a possible US-Georgia free trade agreement, is harmful to the interests of both Russia and its client states.

Georgia has made clear that it is ready to work with Russia to peacefully resolve the conflict based on respect for Georgia’s internationally recognized borders. Russia must decide whether  it wants to remain on the dark side of history or contribute to the peace, stability, and prosperity of its neighborhood.