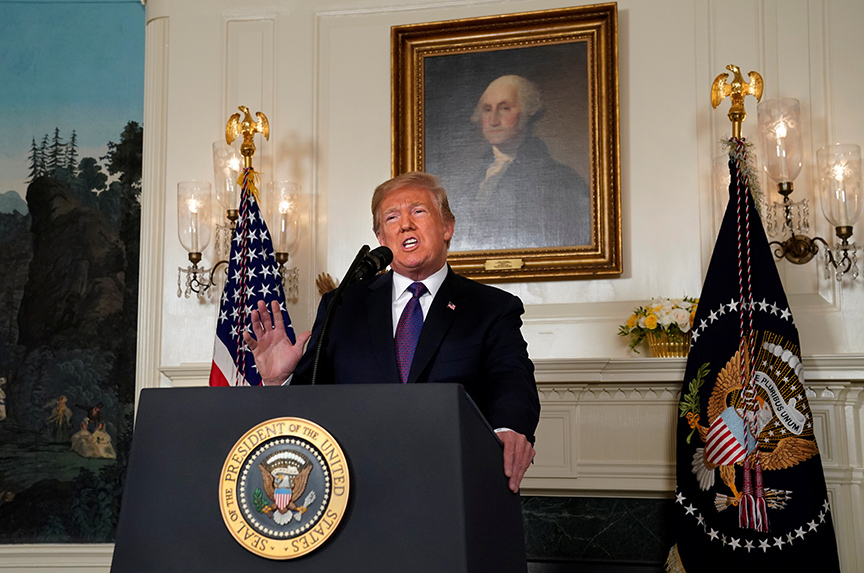 The morning after US, French, and British jets targeted chemical weapons facilities in Syria, US President Donald J. Trump took to Twitter to declare “Mission Accomplished.”

That declaration—the two words that former US President George W. Bush came to regret—has left many scratching their heads.

“I found the comment itself puzzling because I don’t know what exactly the president (or the briefers at the Pentagon press conference) mean by it,” said Faysal Itani, a senior fellow in the Atlantic Council’s Rafik Hariri Center for the Middle East. “They seemed to pitch it as meaning ‘successful operation.’”

Itani said there was no doubt that the strikes hit their targets without any loss of US lives or equipment. “But if ‘Mission Accomplished’ is supposed to mean that Bashar Assad has been deterred from using chemical weapons, the most that I can say is ‘maybe,’” he said.

Aaron Stein, a senior fellow in the Hariri Center, said most professional members of the military probably “cringed” when they read Trump’s tweet.

“The mission was a success, but let’s be clear about what it was intended to do: Punish the Syrian regime for the use of chemical weapons. The strike did that, but as the Pentagon made clear, Assad probably still has residual capabilities that he could employ, or simply just hang on to,” he said.

Itani said that the strikes were much smaller than the Assad regime had expected and narrow in their target set.

“I concede that its possible Assad will not use [chemical weapons] again, not least because he’s almost won the war and much of the really tough fighting is over,” Itani said. “But then, he may just do this again in one year, in which case [Trump’s Mission Accomplished] slogan will be reminiscent of George W. Bush’s ill-fated banner announcing the end of major combat operations in Iraq in 2003,” he added.

In the days leading up to the strikes, Atlantic Council analysts had made the point that one-off missile strikes alone would do nothing to deter Bashar al-Assad’s killing machine in Syria.

US Defense Secretary James Mattis announced on April 13 that the strikes were a “one-time” shot, but Western officials have left open the possibility of more strikes in the event of another chemical weapon attack.

A suspected chemical weapons attack in the Damascus suburb of Douma on April 7 was the main provocation behind the strikes. Western governments, including the United States, the United Kingdom, France, and Germany, blamed Assad for the attack in Douma. Russia said the attack was fabricated.

This was the second time in a little over a year that Trump has ordered missile strikes in response to chemical weapon attacks in Syria.

On April 7, 2017, Trump ordered missile strikes following a chemical weapons attack on Khan Sheikhoun, a town in the western Idlib province. Fifty-nine Tomahawk Cruise missiles struck Al Shayrat air base where the US intelligence community concluded chemical weapons were stored and loaded onto aircraft used in the attack.

One year later, faced with a similar situation, he made the same decision.

At its briefing on April 14, the Pentagon emphasized the United States had accomplished a “narrowly defined mission of successfully engaging, with its allies, three facilities at the heart of Syria’s chemical weapons program,” said Andrea Taylor, a nonresident fellow in the Hariri Center.

Is that enough to deter Assad from using chemical weapons again?

“Success of a broader mission—of deterring future chemical weapons use—is not certain, and in fact future actions of the Assad regime can only prove that mission unsuccessful or inconclusive,” said Taylor.

As for the broader US strategy in Syria, Stein said that is “still bifurcated.”

“The US will strike the regime if [weapons of mass destruction] is employed, but its main mission remains the war on Islamic State and, as the president made clear, the US intends to wind that war down and look for an exit,” said Stein.

Taylor said what further complicates things is “an unclear threshold for what chemical weapons usage would result in a military response.”

“At the time of the punitive strikes, the United States had not yet confirmed (though it also had not ruled out) whether the Syrian regime had used a nerve agent in Douma. It remains unclear whether the threshold for a future punitive response is the use of any chemical agent, to include chlorine, or whether the threshold is defined by the scale of an attack such as number of casualties. This threshold for action may be among the most uncertain aspects of the broader US policy in Syria,” she added.