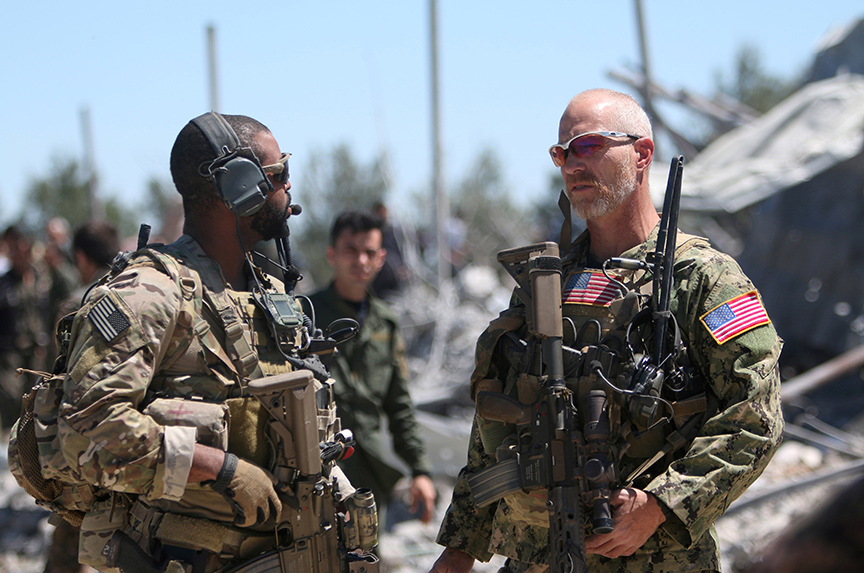 US forces are seen at the Kurdish People's Protection Units (YPG) headquarters after it was hit by Turkish airstrikes in Mount Karachok near Malikiya, Syria, on April 25, 2017. (Reuters/ Rodi Said)

That is the question.  On the “leave” side of the answer are Bashar al-Assad, Ali Khamenei, Vladimir Putin, and Donald Trump. “Not to leave” is the position of the United States Department of Defense. Who will prevail? Who should?

One may stipulate that President Trump’s motives for wanting to put Syria in the rear-view mirror do not align with those of Assad, Khamenei, or Putin.  He has said that the American military mission in Syria (the defeat of ISIS/ISIL/Islamic State) has been accomplished; that to stay in Syria would be to continue pouring money onto the sand in a region where, according to Mr. Trump, trillions of dollars have been wasted.  Some domestic political commentators—pro-and-anti-Trump—believe that President Trump is reflecting his strongly held “America First” views: views strongly embedded in his political base.

These motives are not the same as those held by adversaries and enemies of the United States, even if the bottom “leave” line is the same for all.

For Syria’s Assad, restoring the writ of the family and the entourage to the entire country is essential.  Currently Syria east of the Euphrates River is off-limits to the regime.  Yet this part of the country is important in terms of oil, gas, and agriculture.  Regime business cronies are eager to dip their beaks into eastern Syria’s riches once the Americans are gone.

For Iran’s Supreme Leader Khamenei, the end-game is a Syria subdued for Assad and fully at the disposal of Lebanon’s Hezbollah.  The possibility that eastern Syria might be stabilized to the extent that it could present to all Syrians an attractive governance alternative to an incompetent and larcenous regime—but one firmly under the thumb of Tehran—is terrifying to Khamenei and the Iranian Revolutionary Guard Corps.  They are not stupid: they know their client and his defects better than anyone.

For Russian President Vladimir Putin, the restoration of Assad to all of Syria would enable him domestically to claim the final victory over an alleged American regime-change campaign. Putin’s interests in this matter are politically personal.  Those who try to find comfort in a supposed divergence between Russian and Iranian views of Syria’s future forget that this is all personal for Putin: that tapping into Russian nationalism is the key to his ability to stay in power and run a kleptocracy.  If Assad is in his seat and ultimately answerable to Tehran, Putin—unlike Russian foreign ministry Arabists—could not care less.  For Putin, the Russian Federation is less a cause than a vehicle.

For the US Department of Defense, the three-plus-year war against ISIS in eastern Syria is not yet over.  Turkey’s recent incursion into the northwestern Syrian district of Afrin has diverted assets from the Syrian Democratic Forces (SDF), the Syrian Kurdish-dominated ground combat component of the US-led anti-ISIS coalition.  There are several hundred ISIS personnel reportedly still operating in the southernmost reaches of Syria east of the Euphrates.  So, the kinetic aspect of the anti-ISIS campaign is still ongoing.

But of greater importance to the US military establishment is what comes next. If the US commander-in-chief simply declares victory and orders US forces to vacate eastern Syria, an anti-ISIS effort dating back to the last quarter of 2014 will have been wasted.

If the remnants of Assad’s broken army, supplemented exponentially by Iranian-led militiamen, occupy lands recently liberated from ISIS by the United States and its local collaborators, the stage will be set for the eventual resurgence of Islamist extremism in eastern Syria.  And Iran’s hold on all of Syria would be solidified.

Hence, the Department of Defense wants to operate “by the book:” to keep areas liberated from ISIS free of those who stimulate, aid, and abet Islamist extremism, and to stabilize the area by expediting humanitarian aid, enabling local governance structures to arise, and getting started with a reconstruction process free of the Assad regime’s thieving hands.  Stabilization is not a disembodied piece of military tradecraft.  Its absence in Iraq in 2003 and Libya in 2011 continues to pay negative dividends.

Yes, there are difficult issues of priorities, force protection, and resources to be mooted by the American interagency.  No, the stabilization program should not become the exclusive or even primary responsibility of the American taxpayer.  And if the US president is absolutely determined to pull the plug on eastern Syria and hand something of transcendent value to Putin, Assad, and Khamenei, he should get something of equal or greater value for it.

That the United States will ultimately leave Syria is certain.  But timing and circumstances matter, and nothing will be cost-free.  If any department or agency of the United States government should want to declare victory and pull out, one would think it would be a Department of Defense whose uniformed personnel continue to do multiple deployments and dangerous jobs that most able-bodied young Americans—and their baby boomer parents and grandparents—have avoided like the plague.  That this overburdened department is willing to see things through in Syria until the mission is truly accomplished and the security of Americans protected at least merits the respectful attention of the commander-in-chief and all Americans.

Frederic C. Hof is a nonresident senior fellow in the Atlantic Council’s Rafik Hariri Center for the Middle East. Follow him on Twitter @FredericHof.