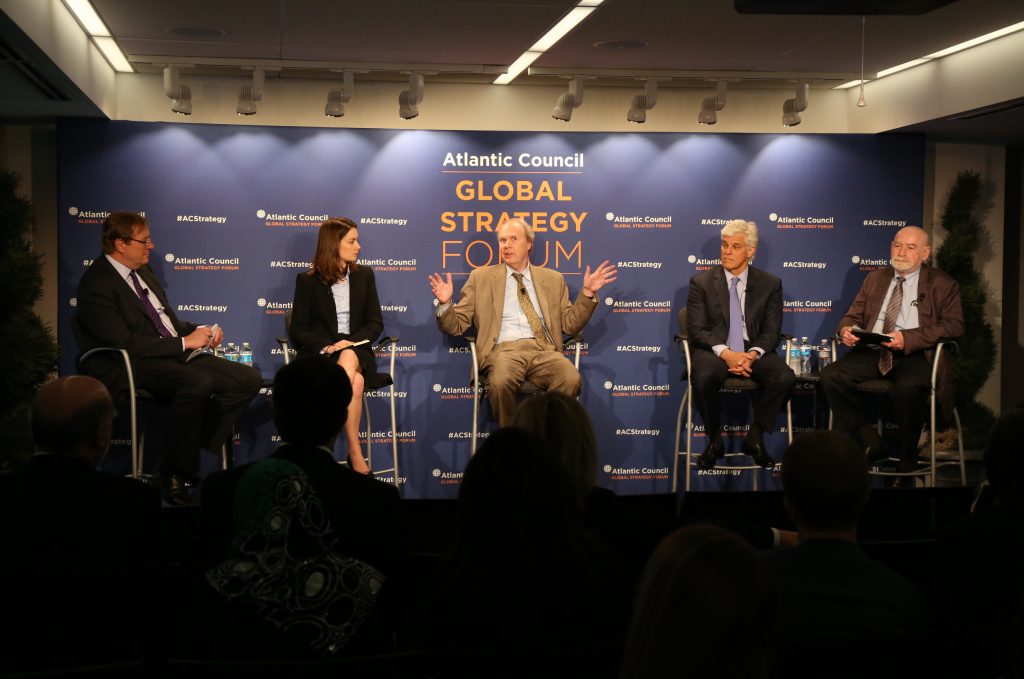 The Washington establishment is unprepared for the technological and geopolitical risks of the future, America is losing influence around the world—and while the United States is still indispensable as a superpower, there’s debate on whether it ought to remain so.

These are among the takeaways from the Atlantic Council’s Global Strategy Forum held April 29-30 in Washington, as seen by Council President and CEO Frederick Kempe.

He said modern society is more vulnerable to crisis than ever, with risks—from terrorism and social inequality to climate change and data breaches—growing faster than the GDP.

“We’re unprepared in almost every way for the speed and scale of change. We’re entering into an era where we’re altering our own evolution as species,” said Kempe. “We’re reducing the barrier to entry for advanced technological development, which will have profoundly good and bad implications.”

“In that session, we heard that the power of narrative is fundamental to all major strategic and policy decisions. ISIS [Islamic State of Iraq and al-Sham] has a narrative. Russia has a narrative. China has one,” Kempe said. “It seems we lack one at the moment, and we’re being out-narrated.”

Next came a debate titled “America’s Role in the World,” between Xenia Wickett, Dean of Chatham House’s Queen Elizabeth II Academy for Leadership in International Affairs, and Christopher A. Preble, Vice President for Defense and Foreign Policy Studies at the CATO Institute.

Mathew J. Burrows, Director of the Strategic Foresight Initiative at the Atlantic Council, said the United States does in fact have a narrative, and that narrative is exceptionalism.

“If you talk to others, exceptionalism means the US expects special privileges. We put down the rules, but don’t necessarily have to play by them,” he said. “What blinds us to it is that as Americans, we do think our country is exceptional, but it means that we don’t really have to think about it. Our system is going to prevail somehow. God is going to deliver it. We don’t have to work on this.”

But in a polycentric world, Americans will soon find themselves in the minority, he warned.

“Maybe some of our ideas will prevail, but in other cases maybe not. We may have to deal with other countries and civilizations that have very different ideas, and they will have the power to make it prevail,” said Burrows, pointing out that “most of the world’s Internet users are not going to be Americans, not going to be using English, and not necessarily sharing our values.”

“From the UK perspective, we do feel the baby-boom generation has really screwed us over,” she said. “I can’t pretend to represent all the view of the millennium generation, but from the discussions we’ve been having, there is a sense that we need a greater diversity of voices. We are the last generation to remember life before mobile Internet.”

“I watch two-year-olds with a tablet, and they’re doing things I can’t even do. So I hope we’re up to the challenge,” she added.

Agreeing that the United States lacks a narrative for the future, Kirk Radke, a partner at the Washington law firm of Willkie Farr & Gallagher LLP, said political leaders can learn much from the “don’t just sit there, get it done” attitude of business executives.

“We have to bring business leaders into this discussion, whether it’s from Silicon Valley or Wall Street or China. I don’t care,” said Radke. “You can learn something from the way they think, and the way they take action. They live and die on their actions, on motivating people in their organizations to do a better job every day. They love competition and chaos, and they don’t shy away from risk. They love it.”

Burrows said he’s particularly worried about conflict in Europe and the Middle East.

“We’re far too complacent. A lot of us believe we live in the most peaceful age ever,” he said. “But these civil war conflicts go on for six to nine years. Even when you have ceasefires, they’re very tenuous. One of this administration’s biggest mistakes is letting Syria fall apart.”

He added that another mistake is “thinking we’re going to pivot to Asia, and forgetting that Europe also matters very much.”

“I’m very worried about Europe,” he said. “The European Union was created to prevent war, not to assure the shape of sausages and the content of chocolate. It was to bind everyone together in such a way as to avoid the conflicts that destroyed Europe. The problem with the euro is that it puts Germany in charge of the rest of the continent. Unfortunately, that’s what World War II was about.”