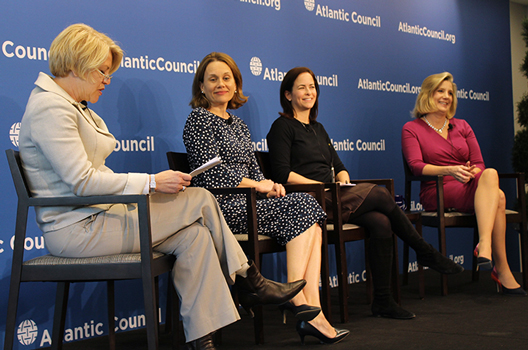 Open-ended questions surrounding US relations with its European allies have direct implications for the ratcheting up of tensions and “managed competition” between the United States and Russia, according to Christine Wormuth, director of the Atlantic Council’s Adrienne Arsht Center for Resilience.

Russia represents a nexus between challenges facing US policy at home and abroad, as US President Donald J. Trump’s position on Russia remains often unclear. Kristen Silverberg, managing director at the Institute of International Finance, said: “The administration is talking out of both sides of its mouth on Russia.”

This could present a challenge for cooperation with the European Union (EU) on shared security issues and sanctions. Silverberg cautioned that “it is going to be hard to hold on to Russia sanctions in Europe…if we can’t spell out where we think this should head.”

However, despite the rhetoric around the transatlantic security alliance, Wormuth said operational continuity and cooperation between the United States and its European allies has continued, and the United States will likely “double down on making the kinds of investments in capabilities that are needed to strengthen our deterrent, to reduce the vulnerability of the overall NATO footprint in Europe.”

On January 31 the Atlantic Council’s Global Diversity and Inclusion Initiative and the Robert Bosch Foundation Alumni Association’s convened female transatlantic thought leaders to assess the foreign and security policy challenges facing the transatlantic relationship one year into the Trump administration.

Wormuth, former undersecretary of defense for policy at the US Department of Defense, and Silverberg, former US ambassador to the EU, joined Julianne Smith, a senior fellow and director of the Transatlantic Security Program at the Center for a New American Security.

The conversation, moderated by Sally Painter, Blue Star Strategies chief operating officer of and senior adviser for the Atlantic Council’s Future Europe Initiative, covered a range of issues and challenges facing the transatlantic relationship, including the future of NATO, a resurgent Russia, the complexities of Brexit, populism, and economic growth.

The panelists discussed several open questions on the administration’s vision for the US-EU political and security relationship, particularly its view on the US role in NATO, a bedrock of the transatlantic relationship. According to Smith, European allies went into the 2017 NATO Summit anxious to hear “an unwavering US commitment to Article 5 and to NATO as an institution—and they didn’t quite get that.”

It was not until after the Summit that Trump affirmed US commitment to NATO’s collective defense clause.

Looking ahead to the 2018 NATO conference in June, Smith said there is still “an open-ended question of whether or not this administration wants to be in a leadership role inside the NATO alliance.”

Though Trump has tempered his rhetoric and attempted to ease uncertainty among transatlantic partners, Wormuth said it is “hard to ask our allies around the world, particularly in Europe, to look beyond what the president is saying.” She urged: “I would certainly prefer to see us talking about Europe and treating Europe like the partner it has been for so many years.”

Despite the challenges facing the US relationship with Europe, the panelists reiterated that there remains a strong transatlantic foundation of institutions and ideas—bolstered by economic interdependence, defense cooperation, and shared democratic values—upon which to build.

Wormuth also emphasized the need for policymakers to improve communication efforts with the citizens on both sides of the Altantic. “We need to find ways to connect NATO and transatlantic issues and the relationship with Europe to things Americans care about in their daily lives,” she said.

The panel, sponsored by the Robert Bosch Foundation Alumni Association, was the inaugural public event of the Atlantic Council’s Global Diversity and Inclusion Initiative, which focuses on issues including female leadership, gender diversity, and advancing the rights of people in the LGBTI community. You can watch the webcast here, and follow the initiative on Twitter @ac_diversity.

Ellen Scholl is deputy director at the Atlantic Council’s Global Energy Center and a former Robert Bosch Fellow. You can follow her on Twitter @EllenScholl.