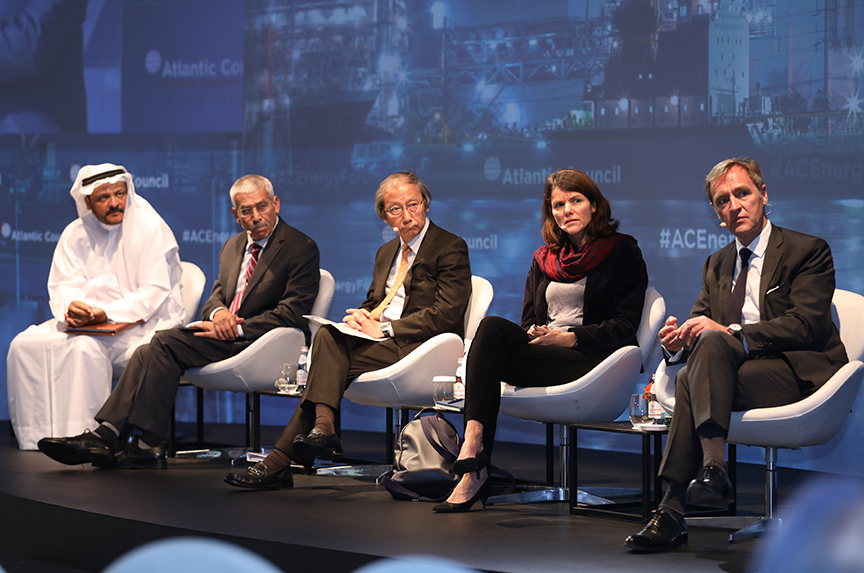 From left: Ahmad Al Khowaiter, chief technology officer at Saudi Aramco; Adnan Shihab-Eldin, director general of the Kuwait Foundation for the Advancement of Sciences; Masakazu Toyoda, chairman and chief executive officer of the Institute of Energy Economics, Japan; Mechthild Wörsdörfer, director for sustainability, technology, and outlooks at the International Energy Agency; and Jerome Schmitt, executive committee chairman at Oil and Gas Climate Initiative participated in a discussion on decarbonization at the Atlantic Council’s 2019 Global Energy Forum in Abu Dhabi on January 13.

Decarbonization—the reduction or removal of carbon dioxide from energy sources—has become increasingly significant in light of the threat posed by global warming as illustrated in a United Nations report that looks at the dire consequences of an increase in the Earth’s temperature above 1.5 degrees Celsius.

As a consequence, countries and companies around the world have undertaken a diverse set of strategies in their quest to cut emissions. Saudi energy giant Saudi Aramco, for example, decided in the 1970s to end the practice of flaring—the process by which natural gas is burned off in a controlled manner when extracting oil.

“Flaring is a huge source of CO2 emissions,” said Ahmad Al Khowaiter, chief technology officer at Saudi Aramco. The firm invested billions of dollars to collect the natural gas and, as a result, four gigatons of CO2 has been prevented from being in the atmosphere, he added.

“With what seemed to be an uneconomic decision back in the seventies, the use of that gas established the petrochemical industry in Saudi Arabia, which now represents one of the most important sectors of the economy,” said Al Khowaiter. “So, what we think of as a waste product can actually become a very valuable product. CO2 is a valuable feedstock. We should not forget that.”

Upstream, Al Khowaiter said, Saudi Aramco is doing a number of things, including using multilateral wells, which reduce the amount of energy per barrel produced, and water-injection technology that reduces the amount of water used to extract oil.

Al Khowaiter spoke during a panel discussion at the Atlantic Council’s 2019 Global Energy Forum in Abu Dhabi on January 13. He was joined in the discussion by Jerome Schmitt, executive committee chairman at Oil and Gas Climate Initiative; Adnan Shihab-Eldin, director general of the Kuwait Foundation for the Advancement of Sciences; Mechthild Wörsdörfer, director for sustainability, technology, and outlooks at the International Energy Agency; and Masakazu Toyoda, chairman and chief executive officer of the Institute of Energy Economics, Japan. Akshat Rathi, a reporter with Quartz, moderated the discussion.

In the power sector, decarbonization can be achieved by increasing the share of low-carbon energy sources, such as renewables and nuclear energy, and capping greenhouse gas emissions from fossil fuel power stations through carbon capture and storage (CCS) devices.

Japan, Toyoda said, is one such country that is trying to develop CCS technology. “Unfortunately, there are not many sites to use this technology,” he said. “So, what we are trying to do is to decarbonize oil or gas or even coal outside Japan” using CCS technology.

Shihab-Eldin, a former acting secretary general and director of research at the Organization of the Petroleum Exporting Countries (OPEC), said in the early 2000s there was an agreement in the group to look at how to address climate change.

Nevertheless, very little is invested in research, Shihab-Eldin conceded, adding: “We [in the Arab Gulf] are sitting on 50 to 60 percent oil and gas assets of the world. We really have to take the leadership in making those oil and gas assets decarbonized.”

Wörsdörfer, a former director at the European Commission’s Directorate General for Energy, in charge of renewables, research and innovation, energy efficiency, said energy efficiency and renewables are “very high on the agenda” in Europe. Indeed, Europe has set an ambitious goal to be carbon neutral—bring its greenhouse gas emissions down to zero—by 2050.

Rathi noted that one big challenge for carbon capture is that it is considered to be too expensive. CCS projects are costly because they require huge amounts of energy to separate and capture the carbon dioxide being emitted. As a consequence, countries like Norway are looking to the European Union to fund carbon capture projects.

“It’s not only the money you need” for carbon capture, Wörsdörfer said of the challenges, “but it’s also public acceptance” and carbon price.

However, Saudi Aramco’s Khowaiter maintained carbon capture cost is not a problem. “The cost is all relative. It is how much we are willing to pay,” he said. “It is more about market and how do we get policymakers to make technology agnostic decisions, full lifecycle decisions, policies that don’t care what the source of the energy is but rather about the final emissions targets.”

Schmitt said “we need to look to look at the energy efficiency of our customers, then we need to provide them with cleaner and cleaner energy.”

The Oil and Gas Climate Initiative is working with governments to launch initiatives that will help kickstart the CCUS (carbon capture, utilization, and storage) industry, said Schmitt. “If we want to be at sync with the 2-degree-C scenario we need to be able to store and capture several gigatons of CO2 per year by 2030, 2040. We don’t need one or two projects; we need twenty, thirty, forty, fifty projects by that time. So we need to kickstart this,” he said.

“At the end of the day, a CCUS industry is about the same as an oil and gas producing industry. You just do the reverse of what we are doing today,” said Schmitt. “Hence it is our responsibility… to work hard on it and make sure it is there to answer the challenge and to help us to come to a net zero carbon industry and world by the second part of the twenty-first century.”

Shihab-Eldin said what is needed is not only to push ahead to accelerate CCUS, but to also explore other ways to remove CO2 from the atmosphere in order to allow the export of oil and gas. “We are not factoring in all of the costs of renewables,” he said, noting that integration is  a significant part of the cost of using renewables.

Ultimately, said Schmitt, there is no silver bullet for dealing with the challenge of climate change. “We need to work together,” he said.