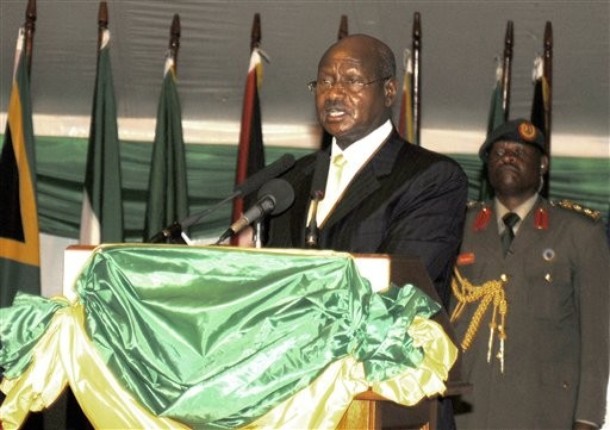 The first half of the World Cup final game was drawing to a close when that universal cry of combined disappointment and relief arose from restaurants and bars around the world.  Spanish goalkeeper Iker Casillas had made a spectacular save.  But at that very moment, cries of anguish arose from Kampala’s Ethiopian Village Restaurant—a suicide bomber struck the gathered football fans.  Minutes later, another explosion ripped through the crowd at the Kyadondo Rugby Club.  Afghanistan, it seems, has come to East Africa.

Al Shabab, a Somalian terrorist group with links to al Qaeda, quickly claimed credit for the 76 dead and 85 wounded in the World Cup attacks.  "Uganda is one of our enemies,” said an al Shabab commander.  “Whatever makes them cry makes us happy.  May Allah’s anger be upon those who are against us.”

Failed states are breeding grounds for poverty, disease, crime, violence, radicalism and terrorism.  Neighboring states fear that the problems can ooze across their borders.  Western states fear that, as in Afghanistan, failed states offer safe havens to terrorists seething to attack Europe or America.  That is why NATO is fighting in Afghanistan.

Since the 1991 ouster of Somalian dictator Siad Barre, Americans, Europeans and neighboring states have tried a number of ways to tame Somalia: direct, though limited American intervention, support for a warlord coalition and Ethiopian invasion and occupation from 2006 to early 2009.

During that period, the Islamic Courts Union, which had briefly controlled the country during 2006, broke up, spawning the radical al Shabab group.  When the Ethiopians withdrew, they took away what little security Somalia had, leaving fertile ground for al Shabab and other radical movements.

Today, the neighboring states, backed by the international community, prop up the so-called government of Skeik Sharif Ahmed.  Under African Union auspices, Uganda and Burundi deploy 6,000 peacekeeping troops in Mogadishu.  But al Shabab has confined Ahmed to a bit of the capital city and it also controls large swathes of territory in the countryside.  Just days before the World Cup, the African Union agreed to augment its troops to 8,000.

The Kampala bombings may have been al Shabab’s opening gambit in an effort to force Ugandan withdrawal from Mogadishu.  "We warned Uganda not to deploy troops to Somalia; they ignored us," said Sheik Ali Mohamud Rage, al-Shabab’s spokesman. "The explosions in Kampala were only a minor message to them…We will target them everywhere if Uganda does not withdraw from our land."

Moreover, some observers fear that the threat could extend to Burundi, Djibouti, Ethiopia and Kenya.  Meanwhile, westerners worry that, though its roots are Somalian, al Shabab may be developing into a dangerous al Qaeda franchise.

As early as 2006, Ayman al-Zawahiri, al Qaeda’s number two man, reached out to radical elements in Somalia: “Brothers in Islam and Jihad in Somalia: know that you are on the southern garrison of Islam, so don’t allow Islam to be attacked from your flank, and know that we are with you.”

This raises the twin specter of an increasingly radical and violent al Shabab in East Africa and of western-based recruits training to carry out attacks against their “home” countries.  In some senses, Afghanistan has come to East Africa.

But the lessons of Afghanistan plus different local circumstances dictate a very different response.

As in Afghanistan, the west does not have the money, people, time or savvy to eradicate everywhere the causes of radicalism—assuming we even know what they are.

Unlike Afghanistan, Somalia’s neighbors recognize the threat and are trying to address it.  The African Union is discussing a force of 20,000.  It will no doubt ask the US and Europe for light arms, money and logistics support.  And the US will no doubt reserve the right to act directly in certain circumstances.

The point to remember is that both too little and too much help could sour an already bad situation.