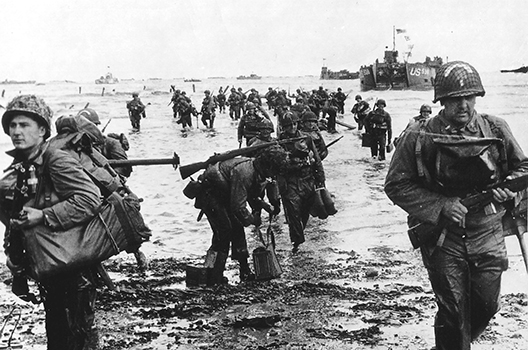 “Earn this.” So says Capt. John Miller to the eponymous soldier in the epic film Saving Private Ryan, which depicts the monumental undertaking of the D-Day invasion of Normandy. On the 75th anniversary of that tide-turning battle in the European theater of World War Two, it is worth reflecting on the legacy of the battle and the sacrifices of the men who fought it.

The sheer magnitude of the forces involved in the largest amphibious assault in history on June 6, 1944, are astounding. Nearly 7,000 ships and more than 10,000 aircraft transported more than 156,000 men across the English Channel to gain a vital foothold on the Continent. More than 4,400 men did not see the sunset that night, nearly equal to the number of troops lost in the entirety of the Iraq War, and almost double the number who have given their lives in Afghanistan.

Supreme Commander of the Allied Expeditionary Forces in Europe, Gen. Dwight D. Eisenhower, wrote in his message to the invasion force in the hours before the operation commenced that “the eyes of the world are upon you. The hopes and prayers of liberty-loving people everywhere march with you. In company with our brave Allies and brothers-in-arms on other Fronts, you will bring about the destruction of the German war machine, the elimination of Nazi tyranny over the oppressed peoples of Europe, and security for ourselves in a free world.”

In less than a year, the Germans had surrendered unconditionally, and the possibility of security in a free world had become achievable.

Seventy-five years later, the shadow of great power conflict looms again over the world. Relationships forged in the crucible of war against tyranny and oppression are at risk from forces external and internal. Nationalist movements are rising in democratic nations, calling into question the efficacy of friendships and alliances that have guaranteed security and prosperity for decades. Autocratic regimes are rising and revisionist rivals strive to exacerbate the fissures in democratic societies. Are the people who have benefited from the sacrifices of the “Greatest Generation” for the past seven decades prepared to continue to defend that which was so hard won?

Fewer than one percent of Americans currently serve in the military, and the demographics of those who serve disproportionately skew to minority and lower-income populations. This is in stark contrast to the “Greatest Generation” that fought in the first half of the twentieth century, when scions of prominent families, celebrities, and professional athletes felt compelled to leave lives of comfort to serve a nation in need.

In addition to the declining commitment to service of its citizens, the United States is faced with the troubling phenomena of employees of companies formed under the security umbrella of the past seventy years refusing to contribute to national security requirements.  Their refusal to leverage the cutting-edge technology they have developed in operations against violent extremists coupled with petitions to their leadership to abstain from this work is in stark contrast to the titans of industry from the 1930s and 1940s who threw themselves into a whole-of-nation effort to defeat the Axis powers.

Today, the collective members of the rules-based international order are fortunate to have advantages in conventional warfighting means and the technological innovation culture that underpins it. However, as former US Secretary of Defense James Mattis said, “we have no preordained right to victory on the battlefield.”  Democratic systems of government will not be implemented by default. Adversaries of freedom, human rights, and self-determination consistently endeavor to undermine the world the men who stormed the beaches of Normandy died to defend.

The most profound way to honor the sacrifice of those men and to secure their legacy of freedom and security is to never forget the monumental whole-of-nation effort that was required to beat back the tide of tyranny. The society begot by their efforts is vulnerable to assault from within and without, and if citizens  want to continue to enjoy its fruits, they must emulate the ideals of service and sacrifice and display a willingness to put their country’s well-being ahead of their own, for the sake of their children and their children’s children. They must “earn this.”

US Air Force Col. Dustin C. Richards is the US Air Force senior fellow in the Atlantic Council’s Scowcroft Center for Strategy and Security. Follow him on Twitter @DustinCRichards.